At Monisnap our goal is to enable users to support their friends and family abroad by providing remittance services where traditional banking services are unavailable.

To this end, we build products under our own brand but we also have partners who leverage our expertise to enable their users to transfer money without the complexities that arise when dealing with multiple methods of international remittance.

In 2021 the front-end team at Monisnap built the Monisnap Interface Kit (Moniik for short). In the following article we’ll go over its creation, from the first meetings to the first projects in production.

For the sake of brevity we are focusing more on the process and reasoning rather than deep-diving the technical details but feel free to get in touch if your curiosity is piqued!

Why build a design system ?

The main reasons organizations decide to build a design system are myriad and well documented. For the team at Monisnap our top priorities were:

The kaleidoscope of design possibilities

The elephant in our design-system-room is of course the "themeable multi-brand" part. Our partners want a seamless experience when their users switch between the partner's main application and the Monisnap application. We need to make our product look and behave like our partner's and follow their brand guidelines.

But doesn't building a design system, without knowing the full extent of customization that will be required of it before-hand seem at odds with the basic idea of finding common patterns in designs, describing and re-using them?

Is Moniik really a bonafide design system? Maybe not, but we don’t get too hung up about it. We're happy with the productivity we've gained since and it's met our objective of cutting down on development time by orders of magnitude.

For example, here is the same recipient form themed for Monisnap and multiple partners. The screenshot below is from Figma, but with a handful of SASS variables we achieved the exact same thing in our production deployments.

Goyav, our first step towards a design system.

Before Moniik most of our front-end code was in a single git repository and we created a CSS-only toolkit we called Goyav that we applied to project components as needed.

This was a great first step towards outlining the components that would be most important to us in the future and thinking about how to make them generic enough for re-use. After several product launches and new partnerships however it became apparent that we were limited by a single repository.

We decided to split our front-end code into multiple repositories which lead us to reconsider how we shared common design elements and UI behaviors.

The guiding principle was that of atomic design and we built up the different stages in the atomic design method as separate files: atoms, molecules and organisms.

We also decided to include an extra stage before the atoms: variables (also called Design Tokens). Colors, margins, borders, font-sizes are all set as overrideable SASS variables. These our the first step for customization for a partner.

Moniik doesn’t include template or page layout components, only some helpers. We were afraid that we would spend more time fighting against layout components, and reading their documentation than using the handful of helpers and variables you need for most layouts.

Getting the ball rolling

In the summer of 2021 we started testing several options for our design system. The only technical decision we made beforehand was to implement it with Vue.js (more on this later).

We wanted to hit the ground running so opted to go with an existing SASS/CSS framework. The two contenders we tested exhaustively were Tailwind and Bulma. In the end Bulma fit our use case the best giving us base classes and helpers to build our components, but also allowing us to re-export them easily without the extra build step required by Tailwind.

Vue.js SFCs (or Single File Components) and their surrounding ecosystem allow us to extend and override templates, scripts and styles in consumer projects with ease.

Although everyone on the team has more or less experience with the increasingly industry-standard React, we decided to go with Vue.js for the following reasons:

However, Vue.js also comes with its fair share of challenges:

Once we were set on technical choices, we built the development environment around the project.

Over the next 8 weeks we developed the different components for the design system starting at the atomic level and working our way up to the organisms.

The pipeline we created that each component went through is illustrated by this diagram: 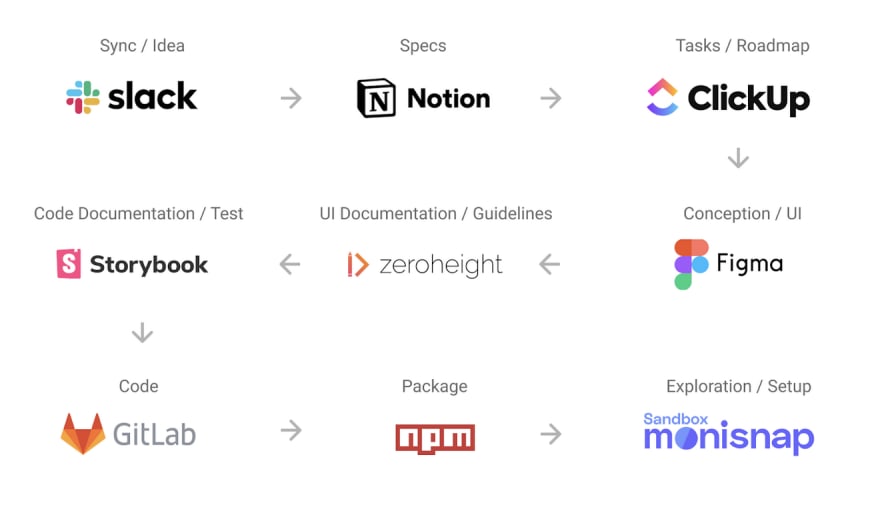 For each component we created a separate .js, .vue and .scss files, Storybook and Jest test files and TypeScript .d.ts declaration files. 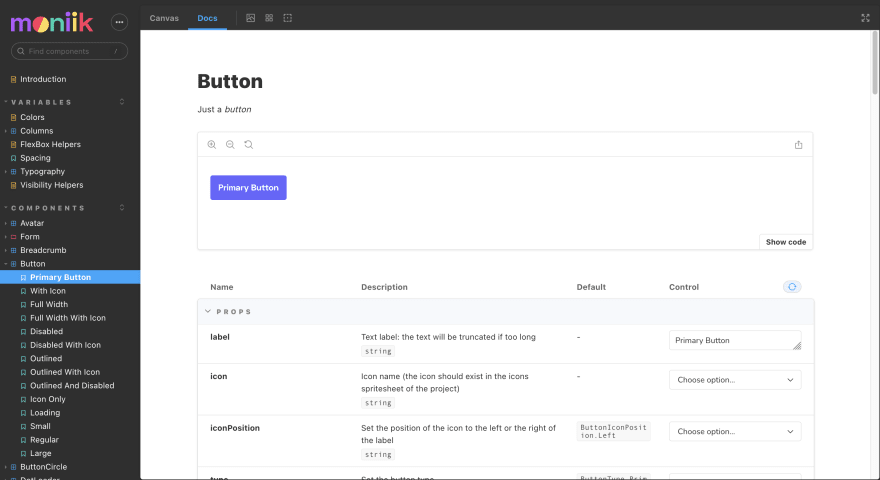 After the intial HTML + SASS integration, we extracted most CSS property values to variables that can optionally be overriden in consumer projects:

Overlapping the end of the component development period, we started our first real project with Moniik. This was crucial to uncovering any issues that only arise when building products in the real world. We fixed some issues with tracking variables and some weird Nuxt compatibility bugs but integration was otherwise very smooth.

In December 2021 we started our first partner project and took three days to add their look and feel to Moniik. This was mainly due to adding SASS variables to values we didn't initially expect to have to modify.

In March 2022 we started our third partner project and with the increased maturity of Moniik’s code base, it took us a single afternoon to customize for our partner.

Moving forward we have the following challenges:

We’re really happy with how Moniik has turned out and the projects it has allowed us to implement. We’re looking forward to building many more over the coming years while progressively improving the developer experience. If you would like to help us, take a look at our careers page

Once suspended, monisnap will not be able to comment or publish posts until their suspension is removed.

Once unsuspended, monisnap will be able to comment and publish posts again.

Once unpublished, all posts by monisnap will become hidden and only accessible to themselves.

If monisnap is not suspended, they can still re-publish their posts from their dashboard.

Once unpublished, this post will become invisible to the public and only accessible to Robin Lambell.

Thanks for keeping DEV Community safe. Here is what you can do to flag monisnap:

Unflagging monisnap will restore default visibility to their posts.