This project is a port of rails scaffold generate for React. You can learn more about Rail's scaffold generator here. I mainly used it for its MVC (model, view, controller) generator. It abstracted CRUD operations, form generation, form validation, list-detail presentation pages, database migrations, SQL queries through ActiveRecord, and styling all with one command.

This project leverages file templating, dynamic form generation, routing and CRUD state management to apply those concepts to React and supercharge any project by skipping lots of boilerplate setup. Create an entire app in one command.

Here is a deployed demo of what react-scaffold-generate can do after one command: http://rsg.drewweth.com

Here we're creating all the files required to manage an "Inventory" object. 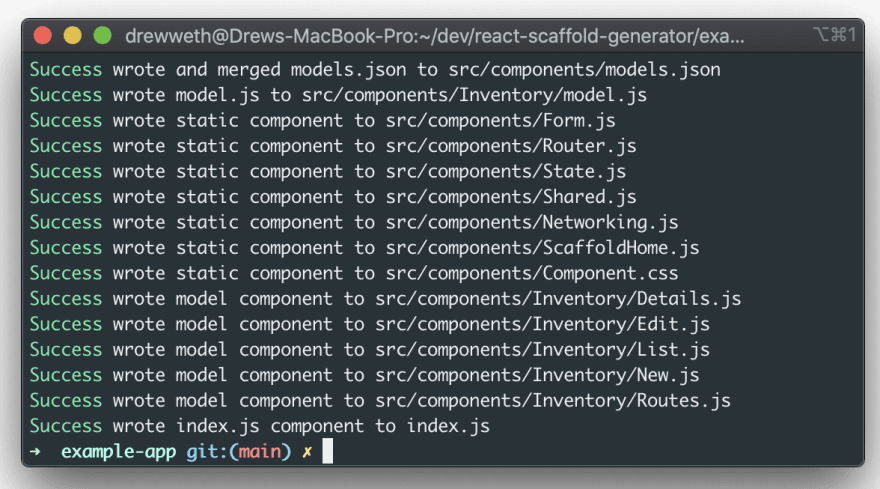 Below is a picture of 5 different pages created by the generator to manage state of a model.

Part of the templating overwrites index.js which replaces <App> with <Router> from src/components/Router.js.

The list of attributes for a model can be the following:

After generating the model, you can go to src/components/MODEL_NAME/model.js to inspect and change the model definition which includes fields, types, display format, and whether the field is required or not (default not required, i.e. false)

• There are a set of common files and model specific files. The common files will be generated to src/components and contain logic for state management, app router, dynamic form component, and more.

• The model specific files are generated at src/components/MODEL_NAME and contain components for state actions (list, detail, edit, new), a route components which contains the routing details for the model, and a model.js which holds the schema of the model in JSON form.

• There is models.json file that contains a list of keys with the name of models created with scaffold. This file is used to created the Navbar, dynamically import routes, and is merged when react-scaffold-generate is run.

• Currently' all common files (including Components.css) and the model specific directory contents (including model.js) are overwritten when the generator runs (I have not added a flag to prevent this). Please use git so you can revert your custom logic and styling, just in case.

Clone this repo then run:

setup makes an example-app and installs dependencies in that directory. watch reloads the templates and example-app when templates or cli.js are updated.

Fork the repository and open a pull request

For feature discussions or questions, open an issue on Github and label it discussion.

How to use async function in useEffect?