In this article, I will discuss what a variable is and some of it's associated features.

Variable, as defined by Wikipedia

is an abstract storage location paired with an associated symbolic name, which contains some known or unknown quantity of information referred to as a value; or in simpler terms, a variable is a container for a particular set of bits or type of data (like integer, float, String etc.)

Maybe this a bit hard to digest. Let's try and break down into simple terms.

Consider your living room. Before you moved in, the room was empty hence enough space [of certain unit i.e. yard, foot, meter, etc.] to put your bed, wardrobe, shoe rack, desk for your computer, books and other stationary and even the space on the wall for your TV and wall clock. Remember this space is limited meaning that whenever you put an item in this space, the size of the space reduces based on the unit the item covers. The bed inside your room is taking a certain amount of space probably the biggest space. And also some items can be easily moved to get more space while other items will be remain at the same location for long e.g. bed and the TV.

Now let's consider the memory in our computers. Let's say a computer has a memory of size 1024 [Bytes of units] as illustrated below 👇

Our RAM is now empty with a full space enough to hold 1024 characters. As data is stored in the memory, then it's available space reduces. So out of the 1024 available space, when you store the name John, it will occupy 4 bytes leaving you with approximately 1020 bytes.

Programming involves receiving data, manipulating that data then display the output. Let's deal with the first part; receiving data. Supposed we want to develop an app that will determine if a person is eligible to vote. A person can vote if their age is 18 and above.

In our app, we will require the user to enter only two things;

First, we have to allocate space in our memory[abstract storage location] in anticipation of the full name and age that the user will enter as illustrated below 👇 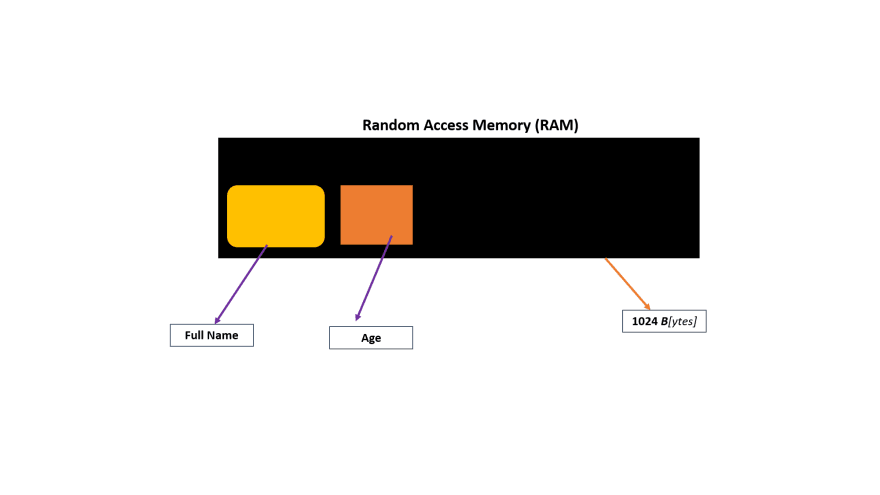 When we allocate memory space, we give it a name [an associated symbolic name] for easy reference. We now have two memory allocations that can be identified as Full Name and Age which are currently empty [waiting for an unknown value].

If the user enters "John Smith", then the Full Name space allocation will now be occupied with "John Smith" [known quantity of information] as indicated in the illustration below 👇; 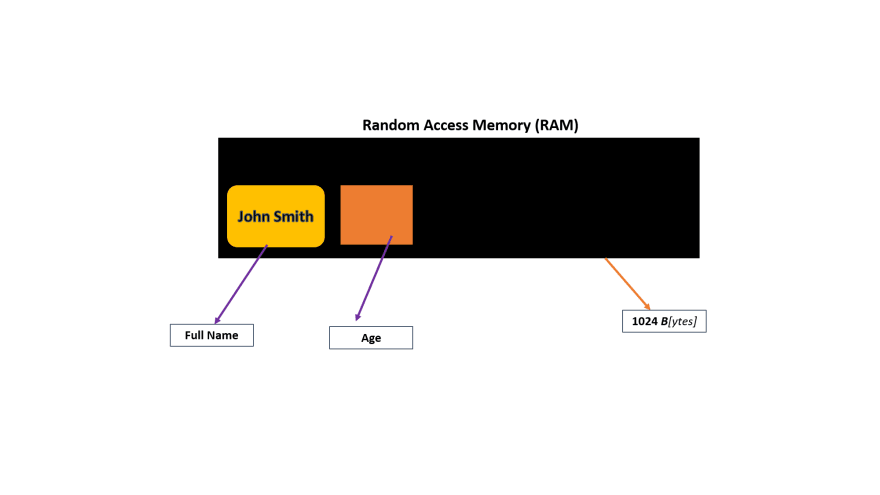 Similarly if the user enters 18 as the age, the memory allocation labelled as Age will have a known value of 18. 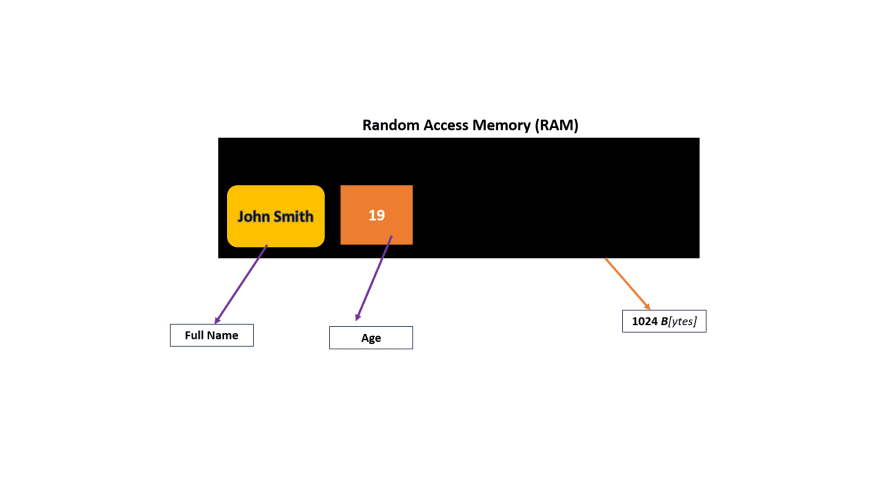 Hence a variable in programming is a space that is allocated in a memory with a symbolic name that is used to store data. Variable is equally important in programming just as data.

Typically a variable has a *name * which is used to identify the space allocated in the memory. Because no programming language is reference in this article, I will only discuss what is generally accepted.

Another note on naming a variable is that it should be descriptive. Try not to use names like DOB to name a variable that holds Date of Birth.

String: it contains values that are placed between the quotation marks i.e. " or '. It's values are series of characters from alphabet, numbers and any special characters. To identify data as a string, simply put them between double or single marks e.g.

Integer: It takes integer values such 20, 100, -45, etc. Mathematical operations can be performed on this type of variable. Think about age, population, total number of fruits, number of countries in a continent, etc. All these will serve as good examples of integer values

Double/Float: Both take decimal numbers such as 101.2, 5.0, -1.165, 3.142, etc. Mathematical operations can be performed on this type of variable. Main difference between Double and Float is in the size of value allowed.
Boolean:it holds one of two values only i.e. true or false.

There is a whole lot that you can read about variable. I hope this article will help clear some confusion faced by beginners on variables.

In my next article, I will discuss about sequence structure so see you on the next one 👋.

Setting up MongoDB and Mongoose for your project

Anwar Sadat Ayub
I have been curious about how things work, that's what got me into software development. When am not in my comfort zone, that's when I learn new things 😉
Animate Loading Indicator on Button With Vanilla Javascript
#javascript #css #html #beginners
Thinking about starting a YouTube channel. Any advise/ strategy?
#discuss #programming #tutorial
Picture algorithm with Flowchart
#beginners #tutorial #algorithms #programming

Once suspended, momokid will not be able to comment or publish posts until their suspension is removed.

Once unsuspended, momokid will be able to comment and publish posts again.

Once unpublished, all posts by momokid will become hidden and only accessible to themselves.

If momokid is not suspended, they can still re-publish their posts from their dashboard.

Once unpublished, this post will become invisible to the public and only accessible to Anwar Sadat Ayub.

Thanks for keeping DEV Community 👩‍💻👨‍💻 safe. Here is what you can do to flag momokid:

Unflagging momokid will restore default visibility to their posts.