Throughout our dev careers, we often find ourselves working for many different companies. Most of those companies we simply pass through while we continue on our career paths. However, sometimes, we find ourselves at a company that truly changes us. One that not only propels our career forward but also shapes who we are as people in the process. Kenna Security was one of those special companies for me.

When Kenna first hired me I was barely a mid-level dev working at Groupon and looking for a company to give me that sense of ownership again. Boy did I find it at Kenna. When I was hired Kenna thought I was more junior than they were looking for but they took a chance on me anyway. I could not be more grateful they did. 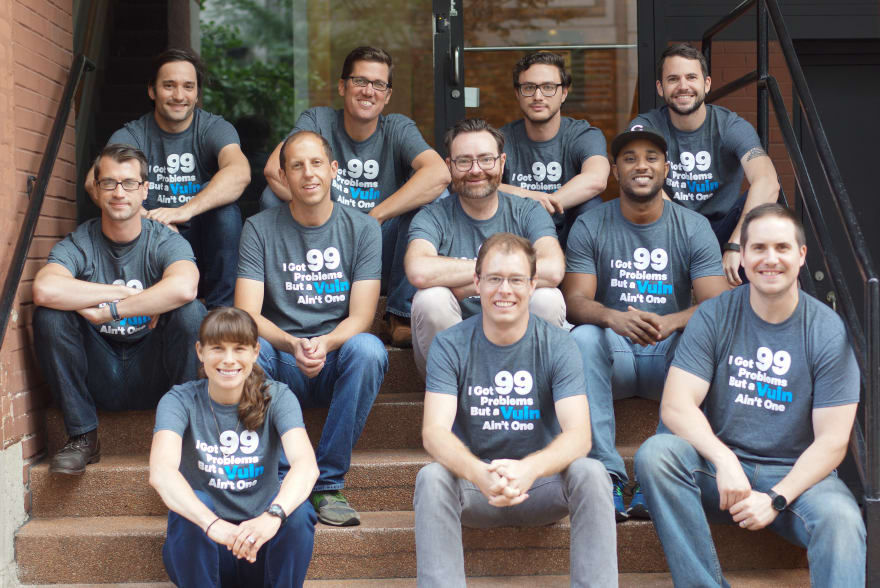 The Kenna Chicago team when I joined which consisted of engineering, the founders and our data scientist

At the time, I was the first girl on an engineering team of 7 but that didn't phase me or anyone else on the team. Everyone I had met at the interview was welcoming and treated me with respect. Back then we were cramped in a small back office with one large room and a 3 person "conference room" lovingly named the hotbox because there was no ventilation in it. 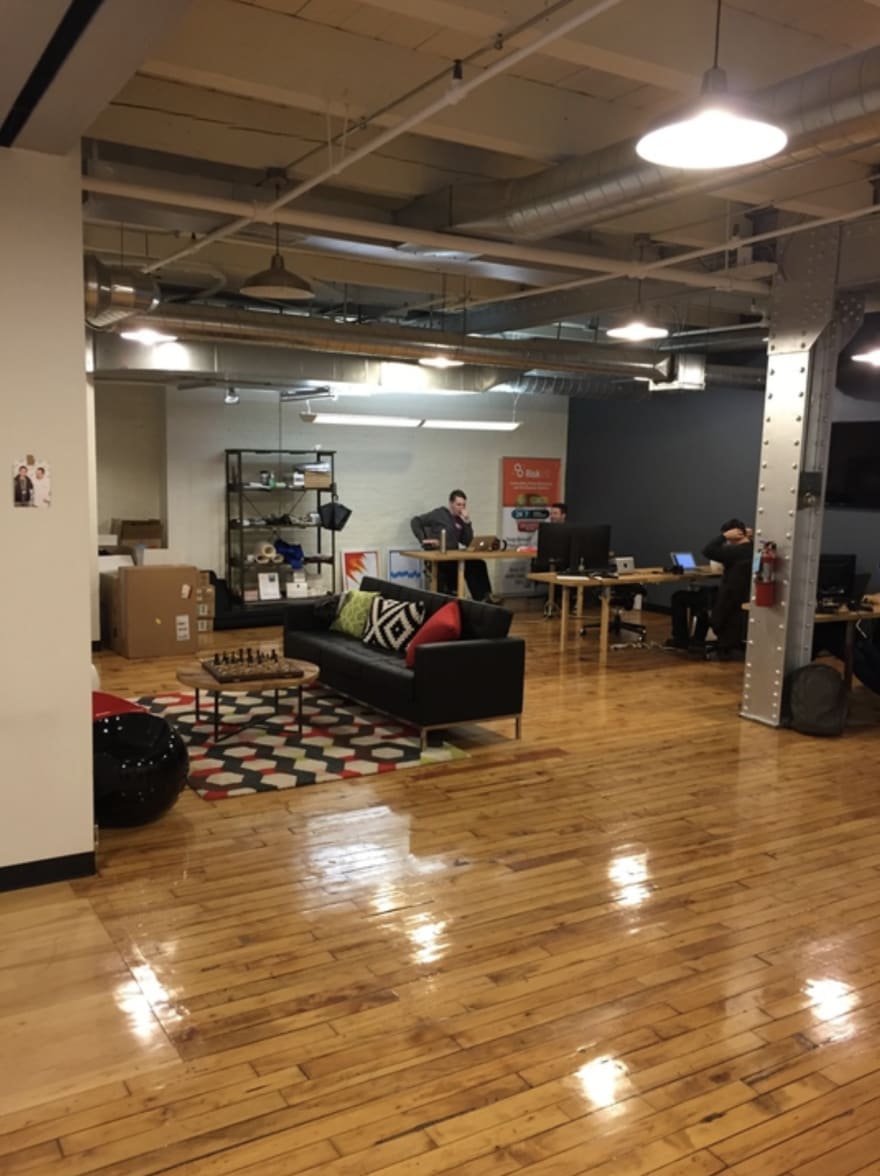 The office was very clearly marked by a paper sign taped to a wooden door. Oh yeah, and back then the company was called Risk I/O. It was in that office that my journey of many firsts began. 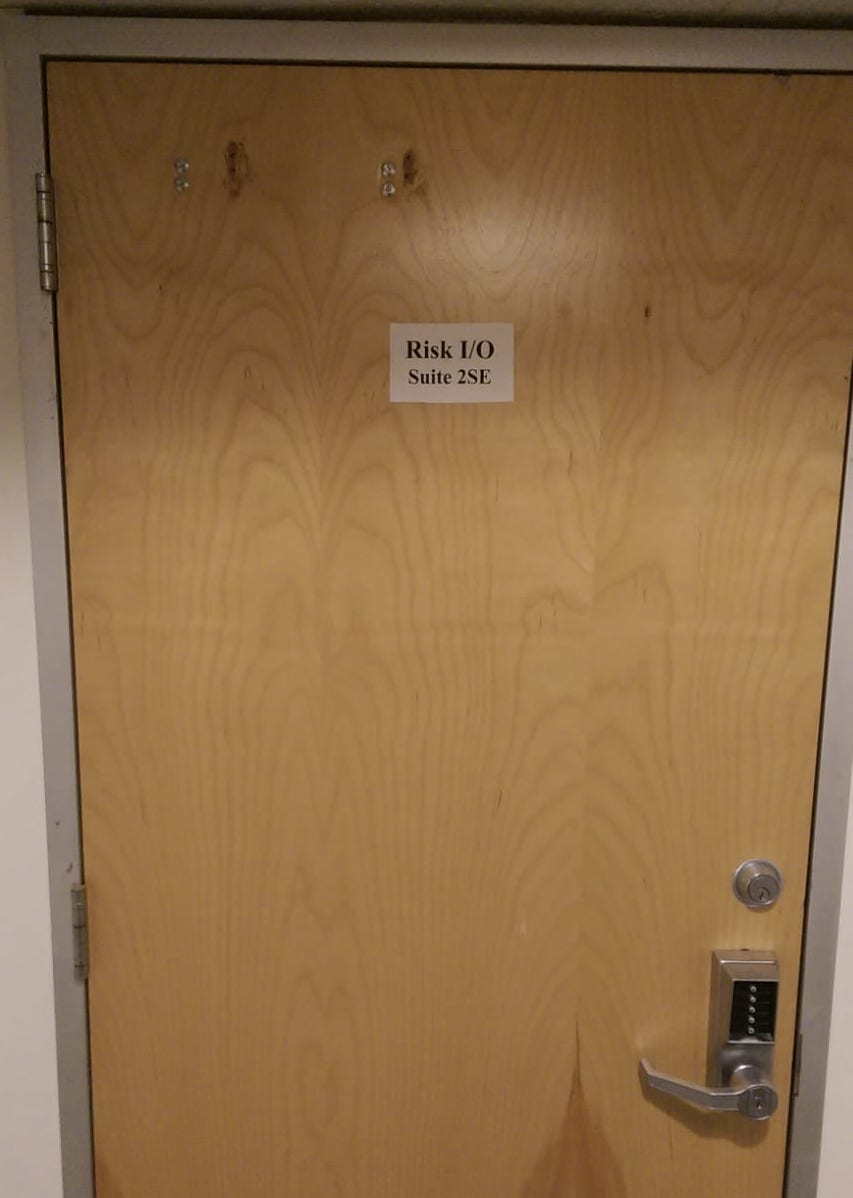 One of Many Firsts

One of those first came quite soon after I joined, my first production outage. If you want to read about the story in-depth checkout my An Engineer's Rite of Passage post. TL;DR I pushed out a migration for a table that contained hundreds of millions of records(not something I had ever worked with) and it locked that table for 3 hours. During that time we couldn't process any new customer data. I was mortified, but I was never blamed or called out. Instead, the team and I learned from the mistake and I was assured that these things happened and it was more important to learn and improve our process than dwell on who pushed the merge button.

Not long after earning my first production outage badge we graduated to a new office one floor up and at the front of the building. This office was HUGE! It had a separate kitchen and 3, 3! conference rooms. Two of which fit more than 3 people in them. We were so small at that point that we simply moved ourselves. Everyone grabbed what they could, and loaded up the freight elevator in the building. We spent a full day moving into our new huge office. 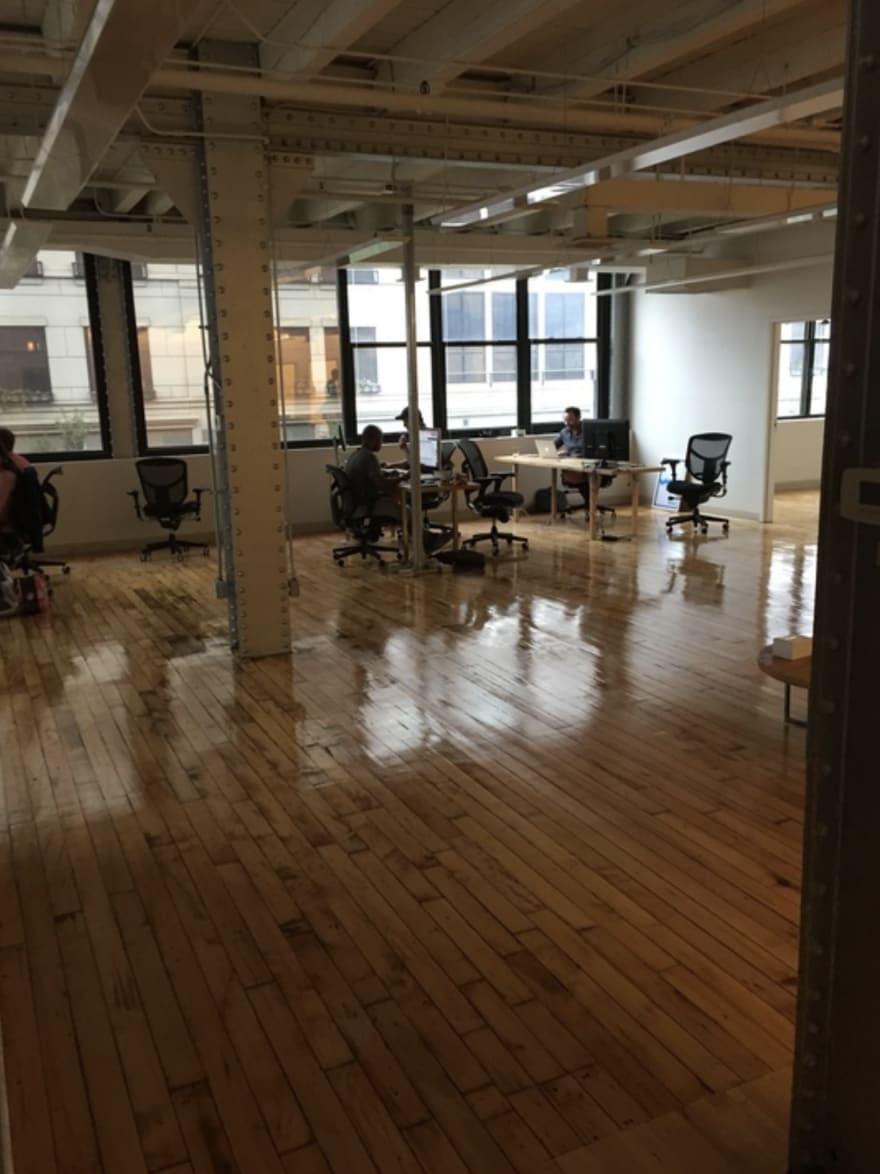 While in that new office the bricks were laid for my next big career leap. A couple of senior engineers left Kenna leaving the question open of who would own and maintain our Elasticsearch cluster. I knew NOTHING about Elasticsearch but decided to take a shot at it anyways. Around the same time, Kenna hired a new Sr. systems engineer who was also interested in learning more about Elasticsearch. The two of us decided to embark on the Elasticsearch journey together. Kenna paid for both of us to go to Elasticsearch training. It was my first ever training class and it was a 2-day crash course in all things Elasticsearch. My mind was exploding with all the new knowledge at the end.

After learning all things Elasticsearch I went on to completely overhaul our entire data and search architecture leading to big gains in performance and stability for the Kenna platform. In January of 2017 that work, in addition to teaching and spreading my knowledge to others, earned me the coveted Senior Software Engineer title. But I didn't stop there.

Kenna continued to thrive and grow and in September 2017 we busted out of our River North office and moved into a new building where we had the entire second floor. 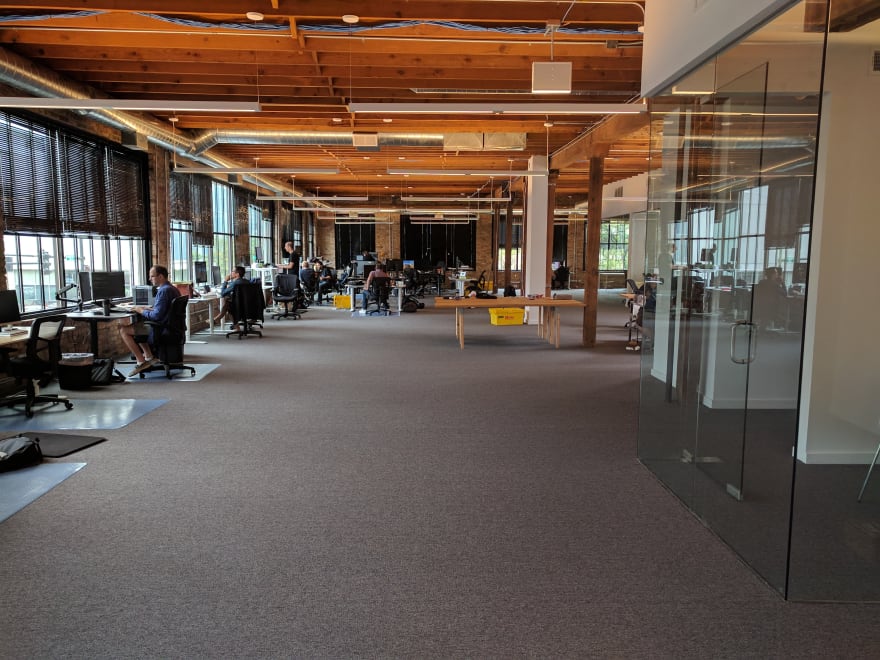 Over the next year as Kenna grew the SRE team tackled and made huge progress improving our infrastructure. I learned a lot about what it takes not only to make a system performant but how to monitor it as well. If you want more of the gory details about what we did during that first year check out my post What It Means To Be A Site Reliability Engineer. You can also hear about some of the nitty-gritty code changes we made that led to big performance gains in my Cache is King talk.

I grew a lot during my first year as an SRE and so did Kenna. By the end of 2018, Kenna's engineering department had well over 30 engineers and the number of new teams being formed was consistently increasing. During this growth, the former Lead SRE decided to change roles and become a dev manager for one of the new teams. At that point, I was ready to step up and lead the team myself. This all happened in March 2019.

Being a lead was hard. No longer was I expected to just crank out code, I also had to empower and manage others around me. I had to make sure my teammates got all the support they needed so they could do their best work while learning and growing. There was a bit of a learning curve but I soaked in everything I could and reached out to those leaders around me that I admired for advice. 9 months later I am far from an expert on leading a team, but thanks to a lot of hard work and learning for those around me I now have the tools I need to lead many more teams in the future.

Throughout my entire time at Kenna, there is one thing that makes Kenna stand out in my mind and that is the people. Our VP of engineering taught me what it means to lead with empathy and compassion. My coworkers taught me how to push and challenge myself and that it's OK to fail. Actually, it's great to fail, because that is how you learn.

The entire team at Kenna is incredibly smart, but they are also kind and always willing to help those around them. Everyone at Kenna works very hard, but at the same time, we all look out for each other and work/life balance is truly the priority. If you want more proof of that read my post I Can't Do It All: My Burnout Story.

Choosing to leave Kenna and those people that I love(yes, love!) was one of the hardest decisions I have ever had to make. But after making my decision I soon realized that even though I won't be working with these amazing people they are going to be friends for life. We will still chat(already have Slack set up 😃) and hang out. We will just have to put in a little more effort to do it now.

The End of My Kenna Journey

As my journey with Kenna comes to an end I would be lying if I didn't admit that I was a little sad on the inside. Of course I am excited for what is next but it is still hard letting go of something that has meant so much to me for so long. Writing this post was partly to share my story with others, but more so for myself to help me process all of these emotions.

No matter where I end up in this giant software world, I will not soon forget Kenna. Thank you, Kenna, for giving me a shot and taking a chance on me. Thank you for giving me the tools and freedom to forge my own path and figure out my niche in the software industry. Thank you for showing me how to be a mentor and teacher. Thank you for accepting my failures, showing me it is OK to fail, and then learning from them with me. You have helped me get to where I am today and I could not be more grateful.

I fully plan in my future endeavors to work with many of my amazing Kenna coworkers again and I can't wait until that day comes. In the meantime, I will take all my experiences at Kenna and all that I have learned and use them to continue to make the software world a better place for everyone.

The first app I ever built was called WaterCoolerMeetings.com (might take a second to load it's on the Heroku free plan 😉). The sole purpose of the app was to connect those less experienced with experts in their desired field. It's goal was to help people find opportunities their environments might otherwise not afford them. I am happy to say my next endeavor will be going back to that mindset and those ideals of helping others.

However, before my next adventure begins I am taking a few weeks off to recharge. I have never taken time off between jobs and I promised myself after Kenna I would. Thankfully my new employer was more than supportive of my decision. I wish I could say I was going to lay around and be lazy but I actually have a couple of talks I need to write and I will be competing at Nationals with my two horses, so it's going to busy! But definitely a good busy.

I am not ready to share where I am headed next because I really want to take this time off to recharge and reflect on how far I have come. There will be plenty of time to get psyched for my next adventure, but I want to save all of that excitement for when it gets closer. Don't worry, I am not disappearing! I will still be around DEV and Twitter and have plenty of little tidbits to share. I just might be taking it a little slower.

The dirty secrets of the IT Staffing industry

ChatGPT got me a job - writing my resume

How to learn in public

Stop being afraid to speak in a foreign language