This article summarizes a list of Angular interview questions which I would ask candidates and that I get often asked in interviews.

1. What is Angular? What is the difference between Angular and Vue.js / React?

Angular is an application design framework and development platform for creating efficient and sophisticated single-page apps. Angular is built entirely in TypeScript and uses it as a primary language. As it is a framework it has many useful built-in features like routing, forms, HTTP client, Internationalization (i18n), animations, and many more.

Vue.js and React are no application frameworks but JavaScript libraries to build user interfaces.

3. What are Angular’s main concepts? 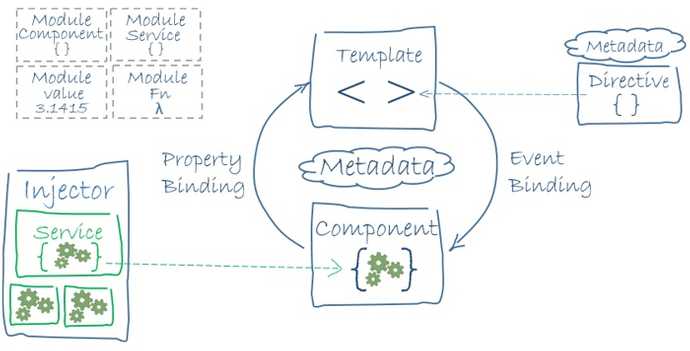 4. What is Dependency Injection?

Dependency Injection (DI) is an important design pattern in which a class does not create dependencies itself but requests them from external sources. Dependencies are services or objects that a class needs to perform its function. Angular uses its own DI framework for resolving dependencies. The DI framework provides declared dependencies to a class when that class is instantiated.

Angular heavily relies on RxJS, a library for composing asynchronous and callback-based code in a functional, reactive style using Observables. RxJS introduces Observables, a new Push system for JavaScript where an Observable is a producer of multiple values, “pushing” them to Observers (Consumers).

6. What is the difference between Promise and Observable?

7. Can you explain various ways of component communication in Angular?

8. How can you bind data to templates?

9. What do you understand by services?

Service is a broad category encompassing any value, function, or feature that an app needs. A service is typically a class with a narrow, well-defined purpose. It should do something specific and do it well.

An Angular component should focus on presenting data and enabling the user experience. It should mediate between the application logic (data model) and the view (rendered by the template).

How do you provide a service?

You must register at least one provider of any service you are going to use. A service can be provided for specific modules or components or it can be made available everywhere in your application.

Angular creates a single, shared instance if a service is provided at root level. This shared instance is injected into any class that asks for it. By using the @Injectable() metadata, Angular can remove the service from the compiled app if it isn’t used.

Provide with a specific NgModule

Registering a provider with a specific NgModule will return the same instance of a service to all components in that NgModule if they ask for it.

10. What do you understand by directives?

Directives add behavior to an existing DOM element or an existing component instance. The basic difference between a component and a directive is that a component has a template, whereas an attribute or structural directive does not have a template and only one component can be instantiated per an element in a template.

We can differentiate between three types of directives:

Angular provides two ways to compile your app. The compilation step is needed as Angular templates and components cannot be understood by the browser therefore the HTML and TypeScript code is converted into efficient JavaScript code.

When you run the ng serve or ng build CLI commands, the type of compilation (JIT or AOT) depends on the value of the aot property in your build configuration specified in angular.json. By default, aot is set to true for new CLI apps.

JIT compiles your app in the browser at runtime. This was the default until Angular 8.

AOT compiles your app at build time. This is the default since Angular 9.

What are the advantages of AOT?

By default, NgModules are eagerly loaded, which means that as soon as the app loads, so do all the NgModules, whether or not they are immediately necessary. For large apps with lots of routes, consider lazy loading—a design pattern that loads NgModules as needed. Lazy loading helps keep initial bundle sizes smaller, which in turn helps decrease load times.

After your application instantiates a component or directive by calling its constructor, Angular calls the hook methods you have implemented at the appropriate point in the lifecycle of that instance. 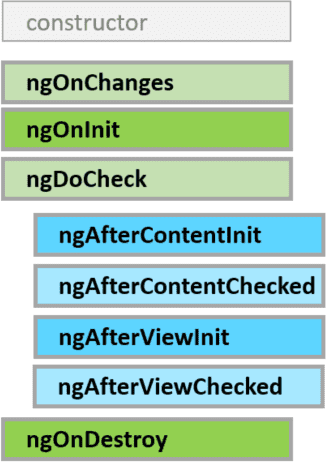 Angular calls these hook methods in the following order:

ViewChild and ContentChild are used for component communication in Angular, for example, if a parent component wants access to one or multiple child components.

15. What is the difference between an Angular module and a JavaScript module?

Both types of modules can help to modularize code and Angular relies on both kinds of modules but they are very different.

A JavaScript module is an individual file with JavaScript code, usually containing a class or a library of functions for a specific purpose within your app.

NgModules are specific to Angular and a NgModule is a class marked by the @NgModule decorator with a metadata object.

17. What is the difference between OnPush and default change detection?

Please read my article The Last Guide For Angular Change Detection You’ll Ever Need for a detailed explanation.  

The difference between var, let and const in JavaScript