Reactivity is the future of JS frameworks! Reactivity allows you to write lazy variables that are efficiently cached and updated, making it easier to write clean and fast code.

I've been working on a new fine grained reactivity libary called Reactively inspired by my work on the SolidJS team. Reactively is currently the fastest reactive library in its category. You can use Reactively on its own right now, and in the future the ideas from Reactively will help SolidJS become even faster.

Let's explore some of the different algorithmic approaches to fine grained reactivity, I'll introduce you to my new reactivity library, and we'll benchmark three of the libraries to compare.

Fine-grained reactivity libraries have been growing in popularity recently. Examples include new libraries like Preact Signals, µsignal, and now Reactively, as well as longer-standing libraries like Solid, S.js, and CellX. Using these libraries, programmers can make individual variables and functions reactive. Reactive functions run automatically, and re-run 'in reaction' to changes in their sources.

With a library like Reactively, you can easily add lazy variables, caching, and incremental recalculation to your typescript/javascript programs. Reactively is tiny (<1 kb) and has a simple API. Hopefully, Reactively makes it easy for you to explore the benefits of reactive programming.

Here's an example of using Reactively for a lazy variable:

Reactive libraries work by maintaining a graph of dependencies between reactive elements. Modern libraries find these dependencies automatically, so there's little work for the programmer beyond simply labeling reactive elements. The library's job is to efficiently figure out which reactive functions to run in responses to changes elsewhere in the graph. In this example, our dependency graph is quite simple:

Reactivity libraries are at the heart of modern web component frameworks like Solid, Qwik, Vue, and Svelte. And in some cases you can add fine-grained reactive state management to other libraries like Lit and React. Reactively comes with a decorator for adding reactive properties to any class, as well as prototype integration with Lit. Preact Signals comes with a prototype integration with React. Expect more integrations as these reactivity cores mature.

Goals of a reactive library

The goal of a reactive library is to run reactive functions when their sources have changed.

Additionally, a reactive library should also be:

Reactive libraries can be divided into two categories: lazy and eager.

In an eager reactive library, reactive elements are evaluated as soon as one of their sources changes. (In practice, most eager libraries defer and batch evaluations for performance reasons).

In a lazy reactive library, reactive elements are only evaluated when they are needed. (In practice, most lazy libraries also have an eager phase for performance reasons).

We can compare how a lazy vs eager library will evaluate a graph like this:

The charts below consider how a change being made to A updates elements that depend on A.

Let's consider two core challenges that each algorithm needs to address. The first challenge is what we call the diamond problem, which can be an issue for eager reactive algorithms. The challege is to not accidentally evaluate A,B,D,C and then evaluate D a second time because C has updated.
Evaluating D twice is inefficient and may cause a user visible glitch.

The second challenge is the equality check problem, which can be an issue for lazy reactive algorithms. If some node B returns the same value as the last time we called it, then the node below it C doesn't need to update. (But a naive lazy algorithm might immediately try to update C instead of checking if B has updated first)

To make this more concrete, consider the following code: it is clear that C should only ever be run once because every time A changes, B will reevaluate and return the same value, so none of C's sources have changed.

In a blog post a few years ago, Michael Westrate described the core algorithm behind MobX. MobX is an eager reactive library, so let's look at how the MobX algorithm solves the diamond problem.

After a change to node A, we need to update nodes B, C and D to reflect that change. It's important that we update D only once, and only after B and C have updated.

MobX uses a two pass algorithm, with both passes proceeding from A down through its observers. MobX stores a count of the number of parents that need to be updated with each reactive element.

In the diamond example below, the first pass proceeds as follows: After an update to A, MobX marks a count in B and C that they now have one parent that needs to update, and MobX continues down from B and from C incrementing the count of D once for each parent that has a non 0 update count. So when the pass ends D has a count of 2 parents above it that need to be updated. 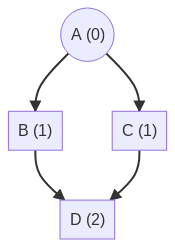 In a second pass, we update every node that has a zero count, and subtract one from each of its children, then tell them to reevaluate if they have a zero count and repeat. 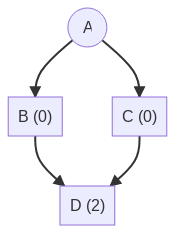 Then, B and C are updated, and D notices that both of its parents have updated.

Preact's solution is described on their blog. Preact started with the MobX algorithm, but they switched to a lazy algorithm.

Preact also has two phases, and the first phase "notifies" down from A (we will explain this in a minute), but the second phase recursively looks up the graph from D.

Preact checks whether the parents of any signal need to be updated before updating that signal. It does this by storing a version number on each node and on each edge of the reactive dependency graph.

On a graph like the following where A has just changed but B and C have not yet seen that update we could have something like this: 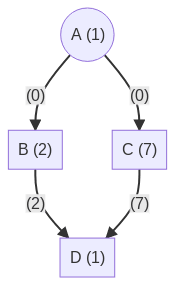 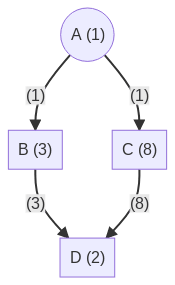 Additionally, Preact stores an extra field that stores whether any of its sources have possibly updated since it has last updated. Then, it avoids walking up the entire graph from D to check if any node has a different version when nothing has changed.

We can also see how Preact solves the equality check problem:

When A updates, B will rerun, but not change its version because it will still return 0, so C will not update.

When a node changes, we color it red (dirty) and all of its children green (check). This is the first down phase.

In the second phase (up) we ask for the value of F and follow a procedure internally called updateIfNecessary() before returning the value of F. If F is uncolored, it's value does not need to be recomputed and we're done. If we ask for the value of F and it's node is red, we know that it must be re-executed. If F's node is green, we then walk up the graph to find the first red node that we depend on. If we don't find a red node, then nothing has changed and the visited nodes are set uncolored. If we find a red node, we update the red node, and mark its direct children red.

In this example, we walk up from F to E and discover that C is red. So we update C, and mark E as red.

Then, we can update E, and mark its children red:

Now we know we must update F. F asks for the value of D and so we updateIfNecessary on D, and repeat a similar traversal this time with D and B.

And finally we get back to a fully evaluated state:

We've created a new and more flexible benchmark that allows library authors to create a graph with a given number of layers of nodes and connections between each node, with a certain fraction of the graph dynamically changing sources, and record both execution time and GC time.

In early experiments with the benchmarking tool, what we've discovered so far is that Reactively is the fastest (who would've guessed 😉).

That said, there's learning here to improve performance of all the frameworks.

It should be noted that there is a second part of the implementation of each framework that makes a big difference in performance: memory management & data structures. Different data structures have different characteristics for insert and delete, as well as very different cache locality in JavaScript (which can drastically change iteration times). In a future blog post we'll look at the data structures and optimizations used in each framework (such as S.js's slots optimization, or Preact's hybrid linked list nodes).

Once suspended, modderme123 will not be able to comment or publish posts until their suspension is removed.

Once unsuspended, modderme123 will be able to comment and publish posts again.

Once unpublished, all posts by modderme123 will become hidden and only accessible to themselves.

If modderme123 is not suspended, they can still re-publish their posts from their dashboard.

Once unpublished, this post will become invisible to the public and only accessible to Milo.

Thanks for keeping DEV Community 👩‍💻👨‍💻 safe. Here is what you can do to flag modderme123:

Unflagging modderme123 will restore default visibility to their posts.