Originally published at blog.mphomphego.co.za on July 25, 2019.

I have been constantly improving one of my side project that scrapes e-commerce websites and extracts some data then uploads the data to a Google sheet. One of my recent updates was to add email notifications, but since I use Travis CI to run the script as a cron-job I needed to encrypt my Google Dev client_secret.json file (for obvious reasons) as well as my new email configuration file such that Travis CI runs my script which contains sensitive information on a public platform.

However, Travis CI doesn't support multiple file encryptions, which took me a while to realize...

To the point, where I stopped even counting the failed builds. 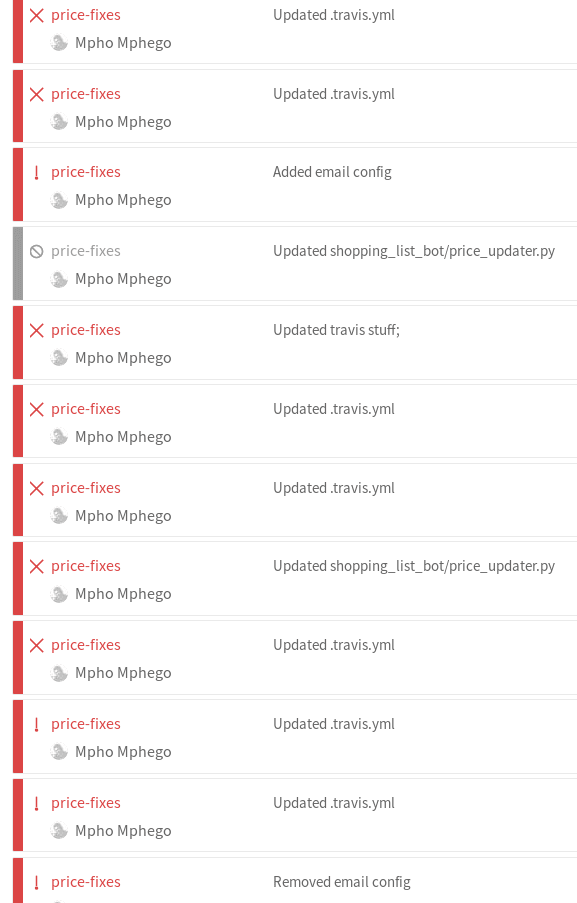 Note: The Travis CI Client overrides encrypted entries if you use it to encrypt multiple files, hence why my script kept failing to build.

In this post, I will detail a workaround to encrypt multiple files on Travis CI using the CLI client.

If you would like to check the project out, go here.

Before we continue, we need to install some dependencies.

NOTE: These instructions assumes that you are running Ubuntu 18.04.

TL;DR: On your Ubuntu installation, else continue at own risk.

If like me, you do not like installing packages in your system.
I have a Dockerfile which builds a Docker container and you can easily run travis client.

Verify the installation once it is done, run: travis version

Once we have a successful installation, login on travis using your GitHub username & password or token details.

If you need to encrypt multiple files, first we need to create an archive of all sensitive files, encrypt it, and version control it then decrypts it during the build.

I needed to encrypt my sensitive email_config.ini and client_secret.jsonfiles, and this is how I did it.

In your .travis.yml, you should notice a new command openssl ... this command decrypts your secrets.tar file and then you would have to add a command to extract the files.

That's it, below is a screenshot of my SUCCESSFUL Travis Build.

a first look at fly