The other day I had to go through a bunch of strings in a .csv file and find which ones ended with two digits.

They were all short strings created from a limited character set that included all the letters of the English alphabet, numbers 0-9, dashes, and underscores. Like:

I opened the file in Numbers for Mac, fully planning to use ISNUMBER to find if the last two characters of each string were numbers. Excel and Google Sheets both have that function. But as it turns out, Numbers doesn't 😬

The Formula and the Filter

After a little digging in the Numbers docs I came up with an alternative.

I put together this formula, which I added to column B. 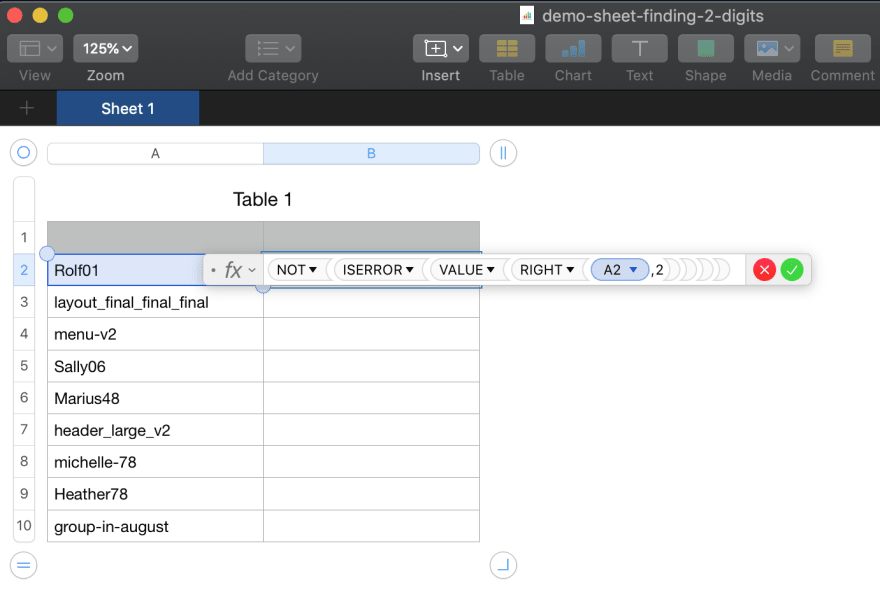 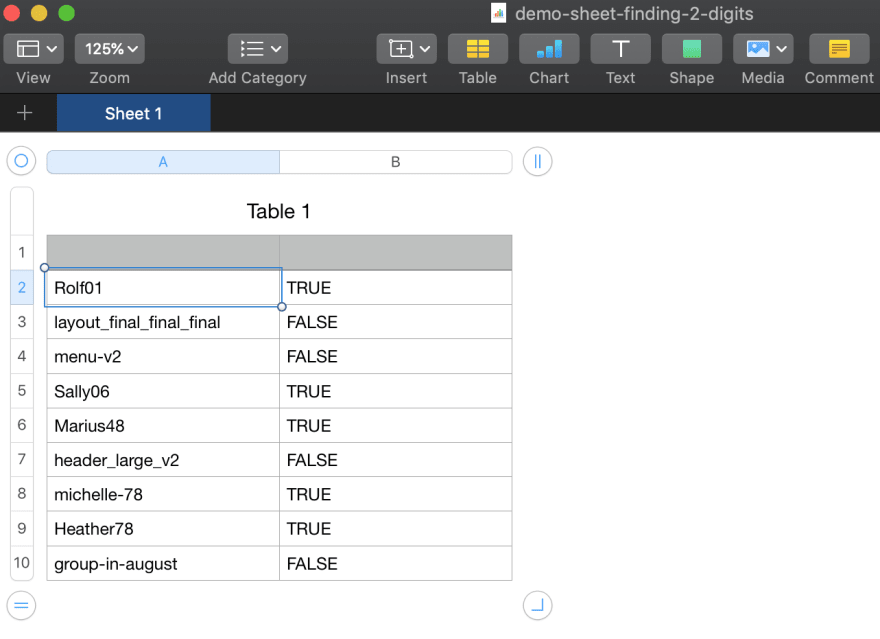 Then, using Numbers’ “Organize” feature, I filtered the sheet by Column B, where the text is not "FALSE".

That filtered out all of the rows where the strings in column A didn’t end in two digits.

How the Formula Works

This formula is a series of questions about the strings in column A. The questions start in the innermost function and works outward.

My first question is: what are the last 2 characters of the string in column A? As a function that’s:

This function returns a new string made up of the two characters at the right end of the string in cell A2. That’s another way of saying the “last two” characters in a string read left to right. 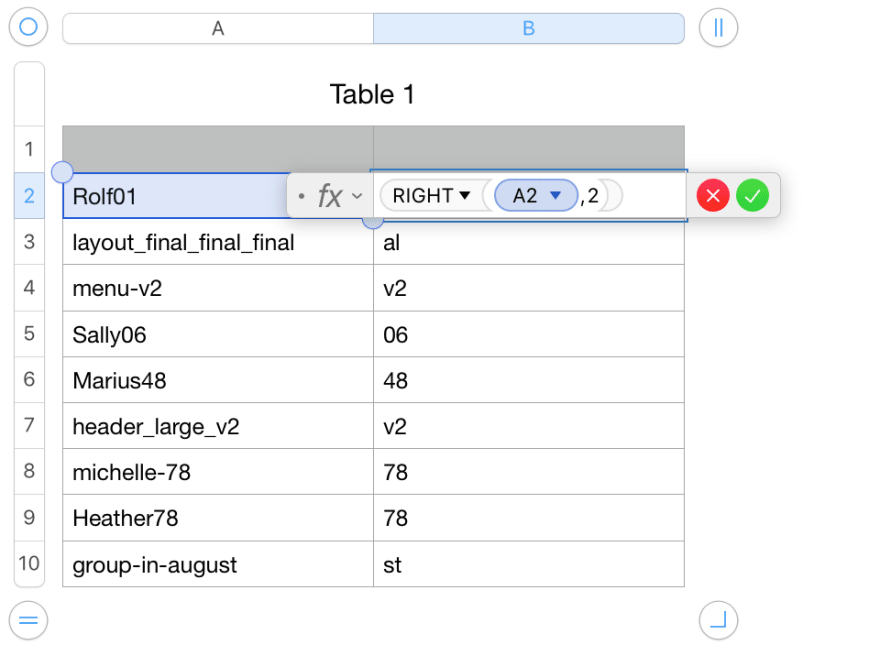 VALUE returns the “number value” of a string. It’s handy for things like getting just the number from a price string that includes a currency symbol. For example, it would return 100 from a string that read $100.

When the string does not have a number value—for example, because it’s a string of letters—the VALUE function will throw an error.

So at this point in the function, I’m using it to return the numeric value of the last 2 characters of the string in column A. 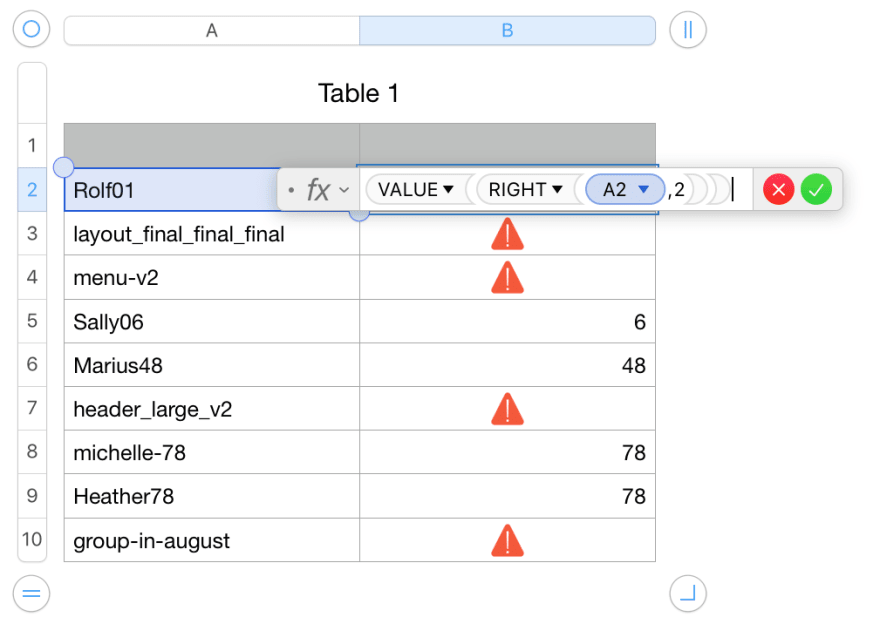 That’s technically enough to sort the sheet — I could filter out all rows where column B’s value is not within the range of 0 - 99. But it's messy.

To keep things tidy, I added a check for if the VALUE function returned an error. 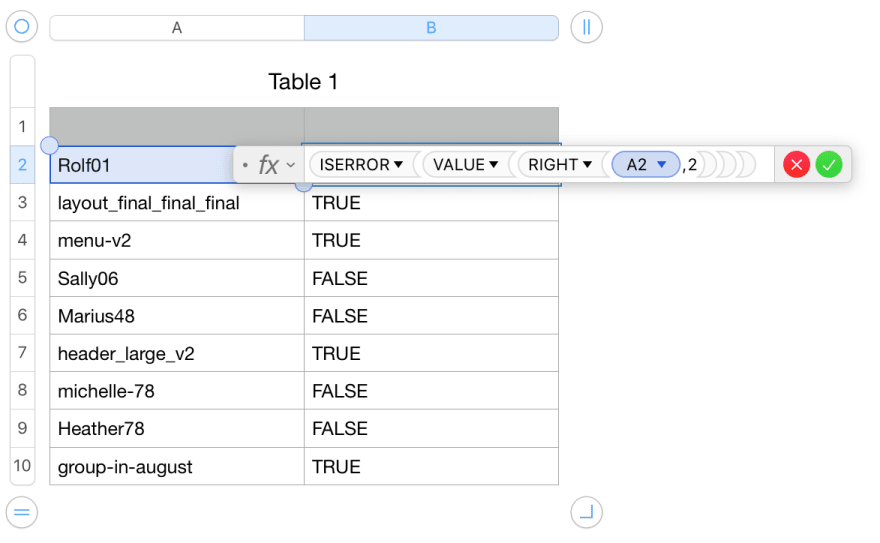 Here, I’m asking it to check if the numeric VALUE of the two characters at the RIGHT end of the string in A2 returns an error. If it does, the question ISERROR is answered with TRUE.

And, it’s enough of an answer to organize my sheet. I could filter out the rows where this formula returned TRUE .

That’s a nice short formula that gave the answer I needed, but I felt that formula brevity got in the way of spreadsheet clarity here.

Since the question I’m asking this sheet is “does this string end with two digits?”, Answering ”yes” by returning TRUE feels better than answering “yes” with FALSE.

And that’s where the last piece of the formula comes in: the NOT function.

Here, I’m asking the formula to say TRUE when there is NOT an error in the numeric VALUE of the 2 RIGHT-most characters of the string in cell A2.

This gave me TRUE whenever the string ended with two digits, and FALSE when it didn’t. 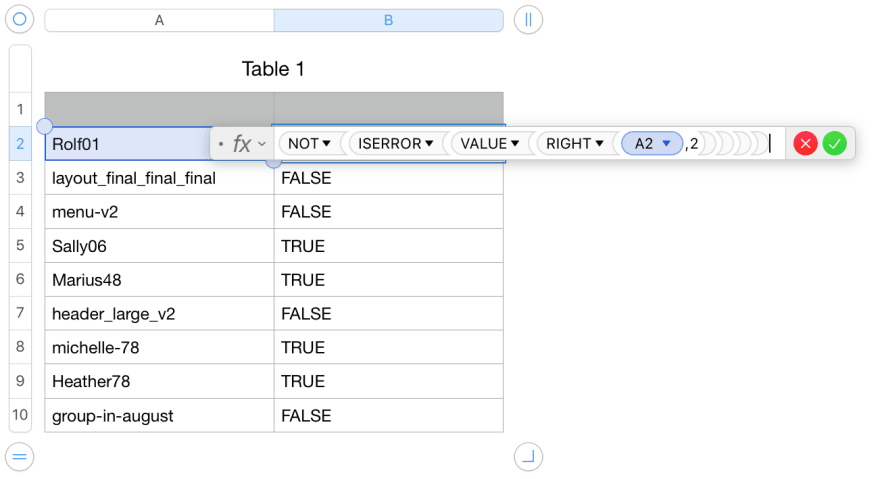 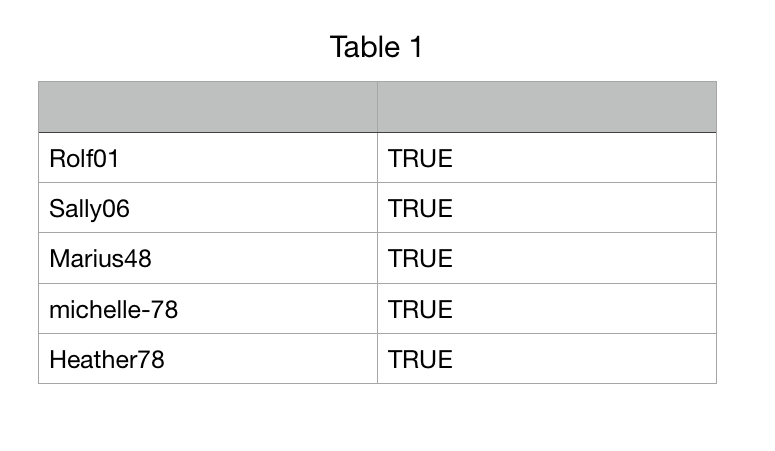 GSOC 21: My GSoC Experience So far