This time, we'll focus on running React Native on the web.

About React Native for Web

React Native for Web is an accessible implementation of React Native's components and APIs that is interoperable with React DOM.

React Native for Web translates all the references of React Native's components (e.g. View) and APIs to their HTML & DOM counterpart (e.g., div).

The React Native for Web homepage does a great job at highlighting why you should try it:

If you've already built a React Native app and you're planning to port it to the web, I recommend giving React Native for Web a try.

One of the most common mistakes people make about React Native for Web is assuming that it is React Native.

Instead of thinking about React Native for Web as a library for building mobile apps that run on the web, think of it as a website that uses React Native as a "components and API framework".

Because React Native for Web is a React website, you can use front-end tools to build and run it.

For example, you can build it with Webpack or Rollup instead of Metro bundler.

However, in this tutorial we'll add it as a separate web workspace.

React Native for Web is compatible with multiple frameworks and tools. You can use it with Create React App, Next.js, Gatsby, Expo (!), or you can create a custom build process.

To keep it simple, in this tutorial we'll use Create React App, which is a basic way to setup a simple, web-only React app with built-in support for aliasing react-native-web to react-native.

First of all, add the react-native-web library to the nohoist list in the root's package.json:

Then, from the packages directory, scaffold a new Create React App project:

To start using our React Native app within the web project, add it to the JavaScript entry point:

If Create React App supported Yarn workspaces out-of-the-box, what we've done so far would have been enough to run the app... unfortunately, it doesn't.

Luckily, we can use CRACO (or other tools such as customize-cra or react-app-rewired) to customize the Webpack configuration used by Create React App to resolve packages imported from other workspaces.

Create a craco.config.js file at the root of your web workspace.

To use the updated Webpack configuration, swap react-scripts in favour of craco in the workspace start and build scripts:

And while you're at it, update the root package.json so that you can invoke the web scripts from the root of the monorepo:

We can now run yarn web:start to run your app in development mode, and yarn web:build to create a production build. 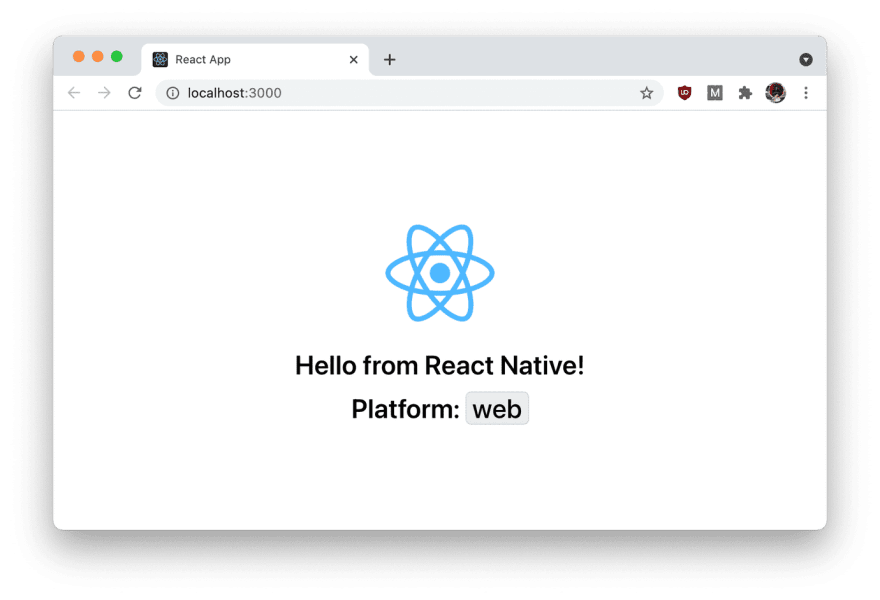 Also, like for Windows and macOS, React Native provides two ways to organize your web-specific code and separate it from the other platforms:

In this tutorial we're not using Expo because it's not compatible (yet) with every platform we're supporting. Still, Expo for Web supports React Native for Web out-of-the-box, provides dozens of additional cross-platform APIs, includes web build optimizations, and is compatible with the broader React Native ecosystem.

And thanks to @expo/next-adapter, you can even use Next.js to control your Expo for Web app.

For details, check "Using Next.js with Expo for Web".

In the next step, we'll re-use the web codebase we just created as a boilerplate to support Electron & browser extensions.