One of the key benefits of working with any Spring project, from Spring Framework to Spring Boot, Spring Data to Spring Cloud, is the developer-first focus each of those projects takes to delivering capabilities. This manifests in several ways, but the ways on which I want to focus with this series of articles are flexibility and scalability, especially with regard to database connectivity.

The vast majority of systems and the applications that constitute them provide most of their value via data, whether it be via storage/retrieval, manipulation/analysis, transport/exchange, or some combination of these or other operations. As developers, data permeates aspects of everything we do, and yet we often don't give data considerations the same level of attention that we do our apps and the logic contained therein.

Spring Boot and Spring Data enable us as developers to "get it done" effectively. Both are force multipliers, levers and fulcrums that take the heavy lifting of boilerplate and ceremony, replacing repetitious patterns to which we developers have grown numb with software-driven opinions. If you have to do the same handful of steps as setup and teardown (for example) with little or no variation every time you perform a set of basic operations, chances are those surrounding steps can be incorporated into an opinion, implemented as a convention one follows within Spring Boot (instead of a manual configuration), and streamlined away from the top level of developer concern. There must be ways to tweak, configure, and disable these steps for edge cases of course, but this is what Spring Boot does as a matter of course.

Let's talk about that Data

What Spring Data doesn't do is make determinations of scalability and suitability of various database implementations for a specific purpose or targeted use case. As technologists, that is for us to determine.

Sometimes we accurately anticipate functional and non-functional requirements. Sometimes scope and scalability requirements remain reasonably close to expectations. And sometimes, when amazing things happen and our systems gain far greater traction and a much wider user base than we could have anticipated, we must scale everything quickly and effectively, both our systems and the data on which they depend and use to provide such meaningful value. That's where Cosmos DB comes in.

Azure Cosmos DB is a planetary-scale data store that offers various ways and APIs to manage your critical data and provide access to it from anywhere at breathtaking speed. Spring Developers can leverage the power of Cosmos DB via Spring Boot starters, among other means, and those starters are built and maintained by Microsoft developers as natural complements to the opinions built into Spring Boot and Spring Data. Developing applications using Cosmos DB is easy and requires no adjustments to a developer's existing mental processes.

One powerful facet of Cosmos DB is its chameleon-like quality of fulfilling developers' needs for various APIs and storage mechanisms. Cosmos DB can operate and be interacted with as a SQL database, a MongoDB(tm) document database, a Cassandra(tm) wide table database, and more: each one at planetary scale and speed, each one with little or no adjustment to your applications needed.

For this article, I focus on the SQL engine and API for Cosmos DB, as leveraged from a Spring Boot application. Let's get started!

I use two scripts (repository link at the bottom of this article) to prepare the Azure environment generally and Cosmos DB specifically for this project: one to initialize environment variables to be used, and one to create the Azure Cosmos DB target based upon those variables.

The script CosmosInitEnv.sh should be sourced by executing it in this manner from a terminal window:

This assumes that the script resides in the current (.) directory, but if not, you must specify the full path to the shell script. Sourcing the script sets the environment variables contained therein and ensures they remain part of the environment after the script finishes, rather than spawning a different environment to run the script and having all changes made in that process disappear upon completion.

To verify environment variables are set as expected, I like to check the environment using a command similar to the following:

To create the Azure resources we will need for this project, we then source the CosmosConfig.sh script as follows:

Two things of note. First, this again assumes you are executing this script from the current (.) directory. Second, since we once again set environment variable values that we plan to use after the script finishes execution, we must source this script as well. Failure to do isn't catastrophic, but it will result in empty variables and will require manually executing the final two lines from CosmosConfig.sh in the terminal in order to proceed.

You can verify all environment variables are now set using this or similar command:

These three env vars are essential to the app we're about to create:

If all three variables' values are present, we can proceed to the next step and build an application.

There are many ways to begin creating a Spring Boot application, but I prefer to begin with the Spring Initializr. Choose a meaningful artifact name, change the group name if you so choose, then select the dependencies as shown in the following screen capture.

Create and open the project

NOTE: All code is in a Github repository linked at the bottom of this article. 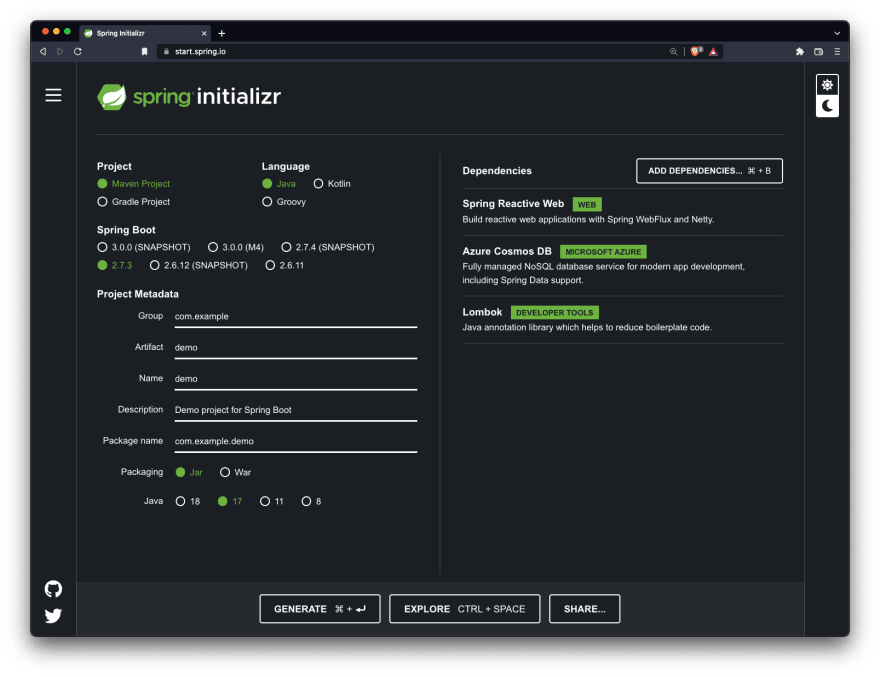 I use only three dependencies for this example:

Next, click the "Generate" button to generate the project structure and download the compressed project files (.zip). Once downloaded, go to the directory where the file was saved, decompress it, and open the project in the Integrated Development Environment (IDE) or text editor of your choice. I use IntelliJ IDEA and Visual Studio Code (VSCode) for nearly all my dev work, and for this article I'll open the project in IntelliJ by navigating (using the Mac Finder) into the expanded project directory and double-clicking on the Maven build file, pom.xml.

Once the project is loaded, you can verify that the dependencies chosen from the Spring Initializr are present within the project by opening the pom.xml file. There will be additional ones brought in for testing, etc., but these represent the three we selected before generating the project structure:

Next, we must specify a few properties for our application to use in its initialization for Spring Boot's autoconfiguration to make the connection with the desired Cosmos DB instance. Open the application.properties file in the project (under src/main/resources) and add the following parameters:

There are many ways for a Spring Boot app to ingest properties from its environment, but for this article, we'll simply use SpEL (Spring Expression Language) variables that map to underlying environment variables with values assigned by the scripts we sourced earlier from the command line.

I'll start with a streamlined example for this article and plan to build out in follow-on posts.

First, I code a domain class. In this example, I create a User class with an id, firstName, lastName, and address member variables. This class and its properties are annotated thusly:

NOTE: In this code, I use lastName as the partition key. This is a terrible choice in most cases, as it typically doesn't provide a meaningful and/or reasonably even grouping of entities for optimizing access. I use it in this simplified example for expediency and would strongly encourage the reader to research partitions with specific domains/data in mind. Choose wisely.

Spring Boot's autoconfiguration takes the power of Spring Data and amplifies it. By including a database driver in your classpath (including it as a dependency in your build file results in its inclusion for deployment) and extending a Spring Data-derived interface in your application code, Spring Boot's autoconfiguration creates the beans necessary to provide a proxy to the desired underlying datastore. In our case, this is all we need to provide foundational database capabilities:

In this single line of code, we are defining an interface called UserRepository that will inherit and potentially extend the capabilities of the ReactiveCosmosRepository, storing objects of type User with identifiers (IDs) of type String. Autoconfig does the rest.

NOTE: We can do more, of course, defining custom query methods and more. But for this example, the provided functionality is sufficient.

Next, I define the Application Programming Interface (API) that provides the means and structure for external applications to interact with this service. Once again the focus is on simplicity, and I define only a single HTTP endpoint that provides a JSON listing (by default) of all Users upon request.

The @RestController annotation is provided by the Spring Framework and combines the functionality of @Controller, to respond to requests, and @ResponseBody, to make the resultant object(s) the response body itself rather than just providing access to the object(s) via a model variable, as is the typical MVC methodology.

The @AllArgsConstructor annotation instructs Lombok to create a constructor for the CosmosSqlController class with a parameter (and thus required argument) for every member variable. Since the only member variable is a UserRepository, Lombok generates a ctor with that single parameter.

NOTE: @AllArgsConstructor has the fortunate (or perilous) capability to update your constructor automatically if you simply add/remove member variables, so remember: With great power comes great responsibility. :)

To create a bit of sample data, I create a Spring bean using the @Component annotation. This annotation instructs Spring Boot, upon application initialization, to create an instance of the annotated class and place that object (bean) into the application context, i.e. its Dependency Injection (DI) container. All beans in the DI container are managed by the Spring Boot application in terms of lifecycle and, of course, injection into other code as dependencies.

To verify the application is able to access the Cosmos DB instance and return the correct data, execute the following command from another terminal window:

Alternatively, you can access http://localhost:8080 from a browser tab or window.

The following should be displayed:

One of the key benefits of using Spring Boot to develop Java (and Kotlin) applications is its developer-first focus. Spring Boot's flexibility and scalability, especially with regard to database connectivity, makes tapping into the power of a planetary-scale database such as Cosmos DB amazingly straightforward for developers. This lets devs concentrate on functionality that meets their stakeholders' needs and helps drive their organization forward, knowing that their data is safe, scalable, and accessible from anywhere Azure is reachable, e.g. planet Earth.

Once suspended, mkheck will not be able to comment or publish posts until their suspension is removed.

Once unsuspended, mkheck will be able to comment and publish posts again.

Once unpublished, all posts by mkheck will become hidden and only accessible to themselves.

If mkheck is not suspended, they can still re-publish their posts from their dashboard.

Once unpublished, this post will become invisible to the public and only accessible to Mark Heckler.

Thanks for keeping DEV Community 👩‍💻👨‍💻 safe. Here is what you can do to flag mkheck:

Unflagging mkheck will restore default visibility to their posts.