Hey guys! What if we wrote a web application similar to a typical rails-application? I.e. it will have MVC, routing, migrations, some configs, all in all, everything like it's supposed to be (or purposed, whatever you like). But all this will be a very-very simplified version of our favorite framework. There will be no generators and interactive console, beautiful layouts and messing with assets. In short, let's go!

Let's begin by creating an empty folder named blog, in which we will work.

Let's write into the gem file:

Rack will soon turn 10 years. Way back then every framework developer had to write his own web-server engine, hoping that users will get used to the author's choice.

Though, work with HTTP is pretty simple. All in all, you receive a request and send back a response. The most common case of engine works like this: it receives CGI-like request and sends back in a response 3 values: http status code, a list of http-headers and a response body.

Here is an example of a typical rack-application:

Proc can respond when the call method is called, and in this case it will return a string with http status code, a hash with http-headers and an array with content.

Libraries for typical tasks support are built on top of this minimal API. Among these tasks are: parsing a request, working with cookies, easy work with Rack::Request and Rack:Response on the object, not http-protocol level.

This way Rack becomes a small layer between a web-server and our actual application.

If I didn't mention your favorite framework, look for yourself. It is very likely that it uses Rack, too.

Okay. Let's write our own rack-application then:

It meets all the requirements of a rack-application. Now we need to create config.ru file, which, in fact, will run our application.

Nothing special here. Connecting rubygems, connecting bundler, then Bundler.require scans our Gemfile and connects everything in here. Then we connect our application which lays here in the root folder, and then we run it using the command run App.new.

That's all! The application is done. Let's run and check it out.

Our application has started and we can take a look on it on http://localhost:9292.

Okay, very quickly, one addition. Let's use puma instead of webrick as an application server. For that to happen let's add gem 'puma' to Gemfile and execute $ bundle install. Now after restarting the application rackup will use puma.
(Vanya, WTF?! Why puma? – editor's note)

The answer: in my view of life, puma starts and works faster than webrick. During the development it doesn't matter at all that webrick is single-threaded and puma can do better. Much more important thing is that webrick is only suitable for development, and puma is suitable both for development and publishing. That means you don't have to keep in mind that you should change a web server. That's it!

We have made a simple application. It always sends a response with one and the same status, one and the same "helloworld". Let's go on. We need to receive different web pages by different URLs. In Rails it can be solved with the help of routings. It is routings where we associate url with a handler. We will use something similar to this. Also, two innovations: let's put everything concerning our "framework" into the lib folder, everything concerning the end application – in app folder.

At first let's create something like route config, and I have written it in yaml.

A very simple association. The root url leads to MainController index action. We need to connect this config in our application, and I will do it this way.

What I have done here, step by step:

All that's left is write the router class itself. And that's how it will look like:

And here it's pretty simple.

So, what is happening in point 4?
This: we look in our routes for a value associated with the url. Let's assume that this is a root request, in our routes.yml we wrote "/" : "main#index". Therefore, as a result we get "main#index".

From this string we have to get a controller, but how? It's done in a method def ctrl(string).

That's how quick we have gotten to the controllers. Let's go on?

Oh! Now we can create our first controller

We don't know how the user of our simple library will call controllers. His controllers will inherit ours, but still we need to connect them to our application. For that purpose let's add the following line to app.rb. Let's do the same thing for the lib folder as well, so that we won't have to specify what to connect:

So, what do we need from controllers? Any self-respecting controller should be able to respond to call method, know its name and action to be called with.

Speaking about routings, I forgot to mention the following: as we see from the code, a controller object will be returned to result.

Remember? Right here a router resolved our request and it will return a whole controller to result. And then we will request the status, the headers and the content from it. OK, let's go!

Just a pure prose and no romance:

After all of these manipulations, having run the application and visited an empty url, we should see Hello world. Everything works!

Let's brush up our controller a little. I chose Slim as a template engine. It is easy to add it to our framework:

Everything is pretty simple. The last thing that's left to do is add the root method to our application.

Done! Now we can register our routes, make light controllers and draw views. And the first view will look like this:

As a result, after running our application we will see: 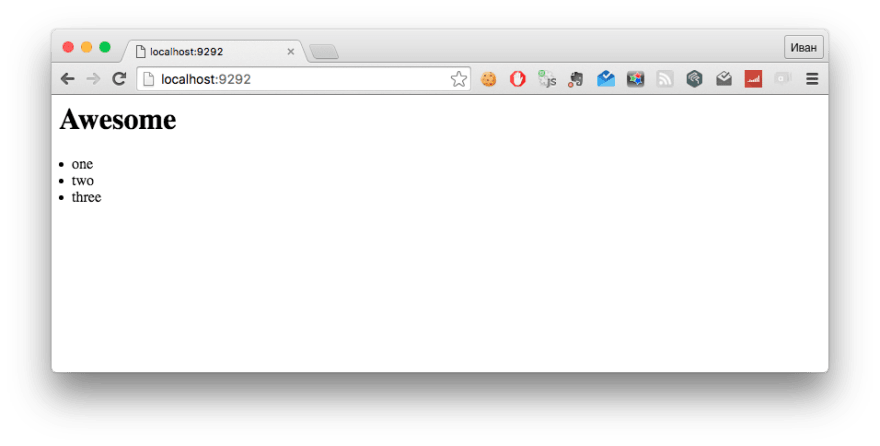 Hey, are you still here? What, you are interested in models, too?
Ok, but no ActiveRecord, mind you. We will use an excellent gem, which can do the same and even a little more sequel and db sqlite itself.

The greatest thing about it is that we won't have to create our model for other models to inherit it. And that's why let's discuss it through the example of posts model. In our routes file there is already a record about "/posts" => "posts#index". So, now let's create a controller, a model and a view.

The typical model in a rails-application (only it inherits Sequel::Model).

A typical rails controller, without a doubt.

And a very simple view. What else do we need, actually?

This: An attentive reader has already saw that our model inherits Sequel::Model(DB). And the constant DB, in its order, isn't defined anywhere. That's what our application will say after an attempt to run it. Moreover, what kind of framework is this, if we haven't defined database access configs anywhere? That's what we will start with:

Again, I have added a little piece of code to app.rb. The first line checks whether there is a config file. If there is, we read this file, parse it, creating a connection to the database and saving it to the DB constant.
That's how config file will look like in our case:

It makes sense that we need this db file to exist. Let's execute several commands.

Just a few things left. We already have posts, but we have neither the table, nor the posts themselves. The solution is not that complicated. Migrations will start automatically when the application is run. For that purpose we will need an extension for Sequel. Let's add it in one line to the block where a connection to the database is defined.

The conencted files execution order is worth paying attention to. First we check if there is a database and connect to it, because it is important for our models that DB-connect is defined.

After that we read our framework, or else application controllers won't find what to address to. Then we scan the app folder. Now both controllers and database are defined.

And after all that we just execute the migrator command run. We define that our migrations will be in app/db/migrations/ folder.

And, finally, let's write two migrations. The first will create a post table, the second will create several posts.

Let's run our application and here's what we get: 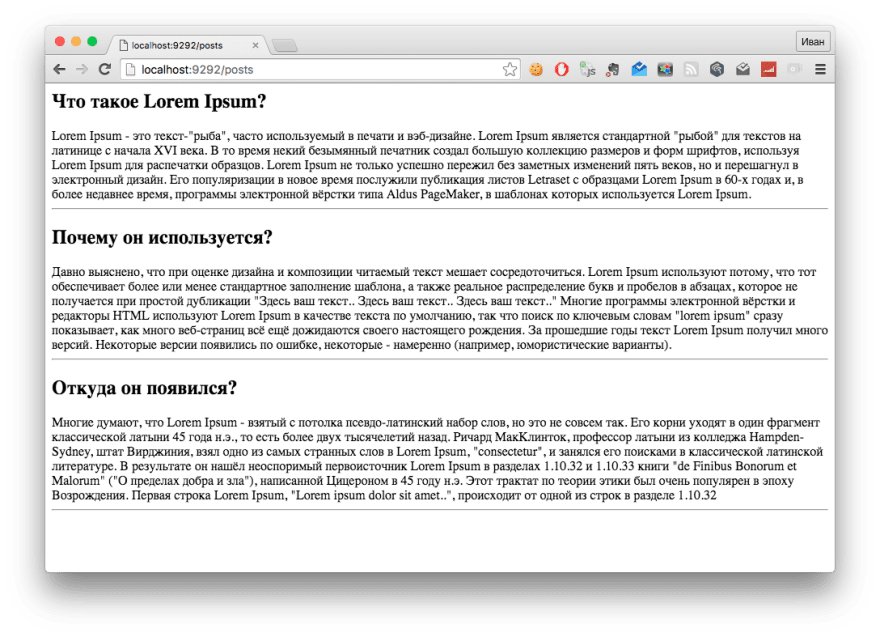 Actually, all this connection has grown well and I decided to put it into a separate file lib/boot.rb

Pay attention that we added '..' to all of the paths, that's because boot.rb itself is located in lib, and all the paths were written relative to the root.

Yes, that's all. As you see, it's not that difficult to write such an application. And such exercises give an understanding of how all this works.

I can't let you go without a home assignment. Try to implement something from this list:

I attach the link to the repository with the end version. Presto!

This is an mkdev article written by Ivan Shamatov. You can always hire Ivan to be your personal Ruby mentor.

mkdev
Innovate faster with zero compromises
How to calculate AWS & Stripe costs, define the price for your product and make a profit on the way
#rails #css #html
The Impostor Syndrome Episode: Adding features with Ruby on Rails and having fun with Figma and CSS
#rails #css #html
How to build a transcription service prototype in 90 minutes with Ruby on Rails and AWS
#rails #programming #prototype

Once suspended, mkdev will not be able to comment or publish posts until their suspension is removed.

Once unsuspended, mkdev will be able to comment and publish posts again.

Once unpublished, all posts by mkdev will become hidden and only accessible to themselves.

If mkdev is not suspended, they can still re-publish their posts from their dashboard.

Once unpublished, this post will become invisible to the public and only accessible to mkdev.me.

Thanks for keeping DEV Community 👩‍💻👨‍💻 safe. Here is what you can do to flag mkdev:

Unflagging mkdev will restore default visibility to their posts.