I get a chance to work on making an angular app CI/CD proof. I've been thinking of writing an article on it for quite some time but yeah now finally I got the time. I'll share my experience here so that if anyone in future looking for a solution they could look at it to get an idea about it.

build:ssr and build:client-and-server-bundles are ssr build commands which will make the production build every time and scripts like development and production will insert the environment after the build.
After updating the scripts we will move forward and make our application to behave what we tell it to do not what angular tells it to do.

So we came up with this solution to create and read a json file. json has to be in the assets because assets don't get minified/uglified and bundler doesn't have any effect on the assets folder so we can play with it as much as we like. In that file we put the information about the which environment and using the second script we update the json.
Create a appConfig.json file inside src/app/assets/config/ directory with the environment.

Now as we have a config file we need to read it and find the environment according to that.
Angular comes with a solution to the problem to wait before the application loads. It allows us to call functions during app initialization. Add the following function in you app.module.ts

Also, add this in your providers array

We provide the APP_INITIALIZER token in combination with a factory method. The factory function that is called during app initialization must return a function which returns a promise.
Now create a service called app-config. Which will fetch the json file from assets directory.

Now we are all set for a local environment everything will work if we do npm start but that's not what we want we want the application to work on build too. Let's work on that too.
To set the environment after build we will use fs to update the appConfig.json. In the second script, we are setting the environment using NODE_ENV which is accessible in server. (ts|js). We will fetch the env from process.env and update the appConfig.json.
In your server.ts add the following code 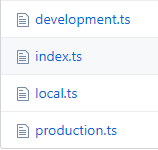 In index.ts add the following code to set env locally

In local.ts and other environments add your variables.

Create other environment files likewise and Voila! 😃 you're done.

Let's recap what we did

Once suspended, mkamranhamid will not be able to comment or publish posts until their suspension is removed.

Once unsuspended, mkamranhamid will be able to comment and publish posts again.

Once unpublished, all posts by mkamranhamid will become hidden and only accessible to themselves.

If mkamranhamid is not suspended, they can still re-publish their posts from their dashboard.

Once unpublished, this post will become invisible to the public and only accessible to Kamran Hamid.

Thanks for keeping DEV Community 👩‍💻👨‍💻 safe. Here is what you can do to flag mkamranhamid:

Unflagging mkamranhamid will restore default visibility to their posts.