I asked my friend Ben what I could get him for Christmas this year and he said that I should surprise him and make something. When I was looking at my list of projects thinking what I could make him it hit me: I had an idea of making an indicator light for our apartment so my partner could see if I was in a meeting when getting home from work1. I could do something similar for Ben and make him an "On Air" sign that turns on when he starts streaming!

The first thing I needed to figure out was the electronics. I had a couple of NodeMCU boards that have been sitting in my box of random things for years that I had yet to play around with. I could use one to act as a webserver and turn LEDs on and off using some webhooks. I pulled one of them out of the box, opened it and started looking at the documentation for them.

A lot of what I did to get the board set up is outlined in the tutorial I followed. Getting started with the code was straight forward and got me really far really quickly. At the start I needed to:

That got me to this point with the code:

After I had it connected to my WiFi and acting as a webserver I started running into problems. I couldn't get the HTTP Server Module to load, so didn't have access to nice functions for understanding the requests and responding to them. I decided I would keep it simple and do basic string manipulation to understand the requests and some basic error handling.

I also tried to use Pulse Width Modulation to control the RGB LEDs and had some difficulty understanding the documentation. Once the LEDs were lighting up and controllable I noticed that they were flickering. I stopped using pulse width modulation to control them and used a binary on/off instead. I would have liked to have more control over the colour of the LEDs, but the strip I had bought was fairly dull and didn't look that great even at full brightness.

The end result is some functional code.

I don't think I will come back to this code (or my other NodeMCU boards) any time soon for other projects.

Getting OBS to trigger webhooks

I found getting OBS to trigger webhooks was easier than I initially expected. I searched for "OBS Trigger Webhook" and came across an OBS plugin for sending webhooks to discord that made me aware of OBS Scripts. I used Parik27's code to figure out the minimum code I needed.

This was a good starting point, but the script wasn't outputting anything or running. Time to look at the OBS Scripting documentation. Reading this I saw what was causing my problems listed as a note.

NOTE: On windows, currently only Python 3.6 is supported.

After installing Python 3.6 and setting the Python install directory to point to it, my script was working!

Now that I had it logging out on events, triggering webhooks was next. Adding in a urllib request on the events hardcoded to the IP Address of the NodeMCU board was going to be more than sufficient for this project.

I want to come back to this code in the future, parameterize it and add in more events that you can trigger webhooks from.

A spaghetti of electronics isn't exactly a nice sign that you could proudly have sitting on your desk, so I needed to create a housing for it. Fortunately for me I have a Cricut that I can use to cut text out of vinyl with, and my local makerspace has a laser cutter I could use to make the housing.

Cutting the text on the Cricut was simple. My partner had already pulled it out of the cupboard so I just needed to plug it in, put the text into a project in Cricut Design Space, load my material and then press cut. The machine had been in the cupboard for almost a year, and if it was still there I probably would have painted on the text or engraved it instead. 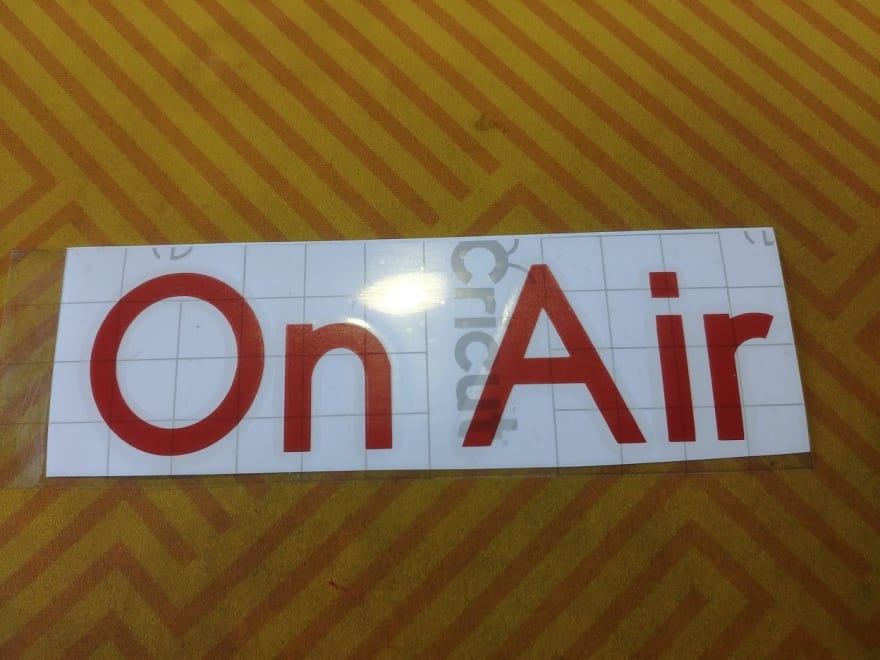 It took me two attempts to cut the housing out with the laser cutter. The first attempt failed because I had the speed too high and the laser didn't cut all the way through, and I moved the origin so I couldn't do another pass2. Attempt number two was better and I had a housing! 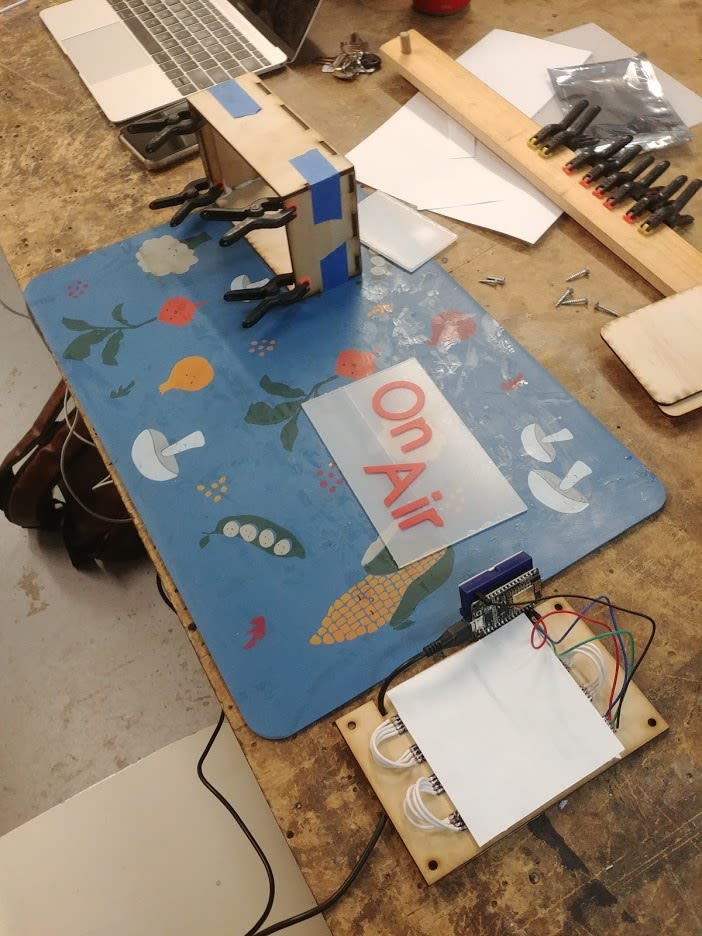 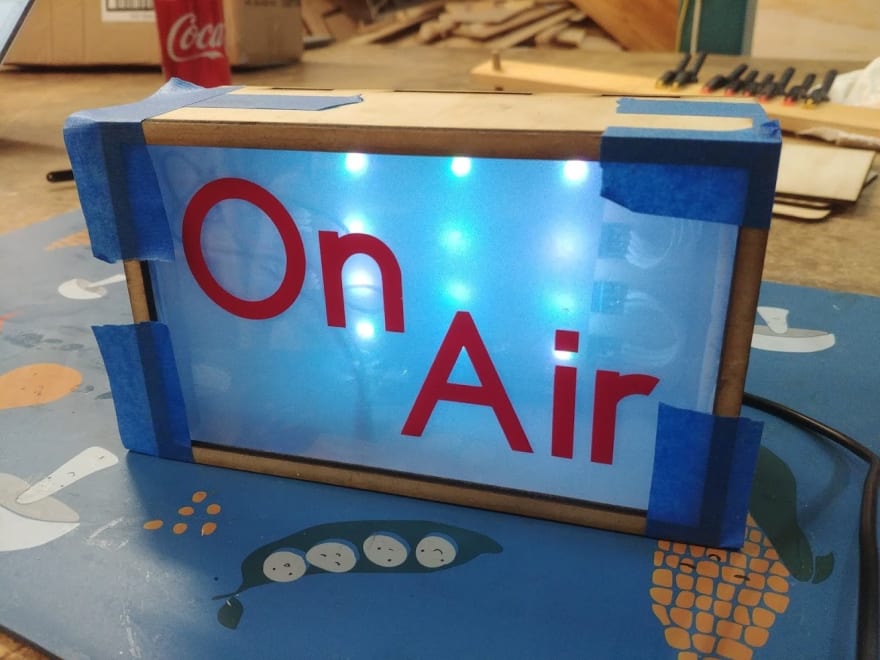 It's always good to look back on a project and think about what could be done differently next time.

Things I have thought about:

I had a different development board arrive right after I finished this, which is a better platform to work from. I have made version two, which I will give to Ben and write a follow up guide if you want to make one yourself.

Getting this to Ben and setting up OBS on his machine to use it wasn't as straight forward as I would have liked. I had to talk to his dad to get permission to add it to the network. His dad gave me permission to add it to their guest Wifi, but I need direct access to be able to call the webhooks. After talking to his dad some more and explaining what it is and how it works, he gave me the details for the main network so I could program it in. If I didn't need to upload the program to change the network it connected to, I could have given it to Ben without the details programmed in and gotten him to do that himself.

Delays caused by unexpected car trouble and an outbreak of Covid19 in Sydney mean that I didn't get to give this to Ben when we had initially planned to catch up, so instead he got the improved version two that I haven't written about yet3, and he loves it! Version two is easier to reprogram to connect it to wifi, but we encountered issues when doing that. The new board I started using doesn't like connecting to Channel 12 or 13 which it appears Ben's home network was on (it was set to auto). It took around 40 minutes of me and his dad going back and forth trying some different settings to get it to work. Ben also uses Streamlabs OBS, which is different to OBS Studio and doesn't have the scripts menu or something similar. Instead of automating it, I set it up so that he has a simple UI that he can use to control it. 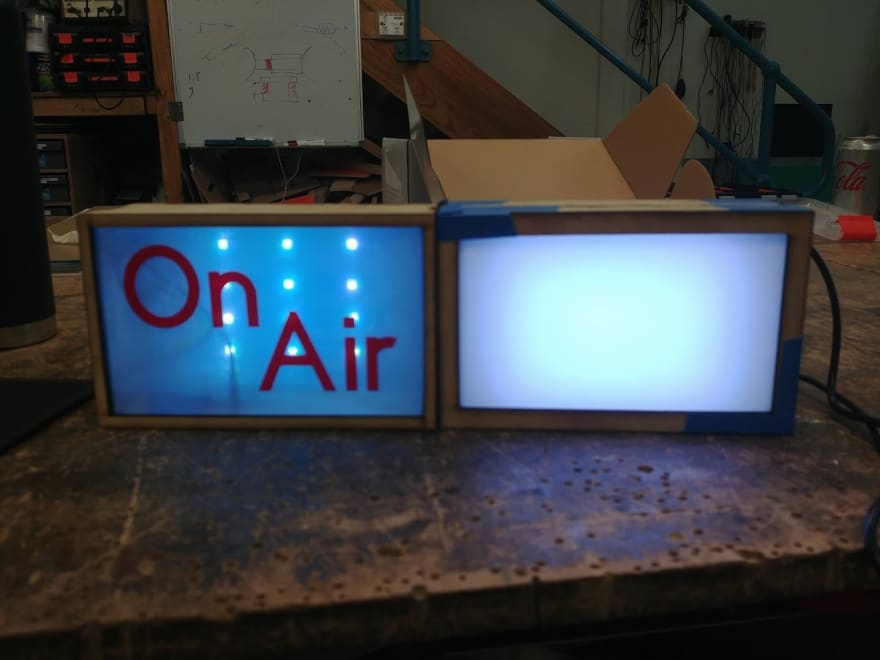 Append a file into a zip file in Python