I have been working on this site – app.sidekik.xyz. It polls the users hard-drive every few seconds and reads their code, detects changes & then rebuilds the UI to interact with that code. As you can imagine that reading large files is heavy work and the app started to become slow when reading a large number of large sized files 🐢.

In the browser there is only 1 thread, the main thread, which is the only thing taking user inputs and updating the UI. Now, if you run JS code which is eating up too much of its resources, then the app's UI will start to suffer. So yea 😬.

With web workers, we get setup another thread, then offload any amount of work to this thread, thus reducing the load on the main thread and making it not hang 🚀.

First get npm i workerize-loader. This enables loading any es6 module as a worker and then call the functions it exports. It also supports async/await, which makes it much easier to interact with the worker functions.

Here is my worker file: src/workers/bg.js

Then i load this worker in my app like this:

Note: Here I am setting up 1 worker to run when the app starts up and then letting it run as long as the app is there. I found this to perform better than creating a then terminating the worker, on a need only basis.

Upon loading the App now, we can see there is a worker. 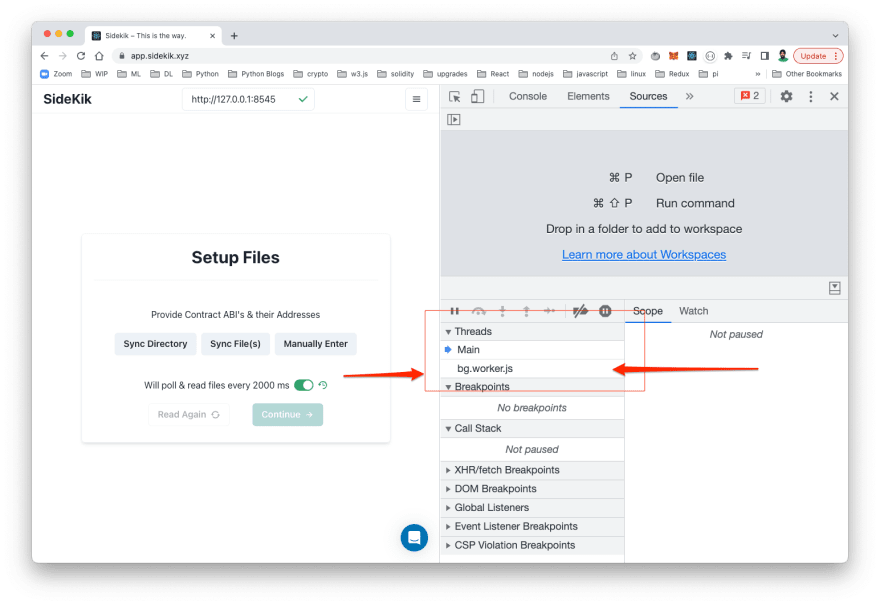 Next, we just have to use this worker in my polling function:

Now the app is no longer slow, as the main thread is no longer running code to read files & check their md5's.

Once suspended, mistersingh179 will not be able to comment or publish posts until their suspension is removed.

Once unsuspended, mistersingh179 will be able to comment and publish posts again.

Once unpublished, all posts by mistersingh179 will become hidden and only accessible to themselves.

If mistersingh179 is not suspended, they can still re-publish their posts from their dashboard.

Once unpublished, this post will become invisible to the public and only accessible to Mister Singh.

Thanks for keeping DEV Community 👩‍💻👨‍💻 safe. Here is what you can do to flag mistersingh179:

Unflagging mistersingh179 will restore default visibility to their posts.