Imagine that you're in writing a function that caches assets on S3. The function should:

Now, imagine that you accidentally write:

When things go well, there is no problem, but if something goes wrong during the write to S3, your asset cache will be out-of-sync with S3. That means that no logic will kick in to retry the upload, which means that downstream services like webpages and video renderers will not display the asset.

This sort of bug happens all the time and is the reason that videos have chunks lobbed off and profile pictures disappear even though "I'm sure I uploaded it."

You work for a price comparison tool and you're contractually obliged to present quotes from 3 vendors. You write:

This will work for a while until Vendor #3 realizes they are getting no business from your site, at which point there are lawsuits, angry consumers, and a degradation of trust in a service. This sort of thing also happens all the time.

In both cases, a company got bit by an asynchronous transaction. In one, the developer wrote something in the wrong order, and in the other, s/he left something out.

What I'd like to show in this series of articles is one strategy to reduce the number of botched asynchronous transactions. To start, I'll revisit the two examples above, showing how both errors are prevented in my IDE (VSCode) by a type-checker (in this case, PureScript).

Check out the following program in PureScript where I write to the db after I write to s3. It compiles just fine. 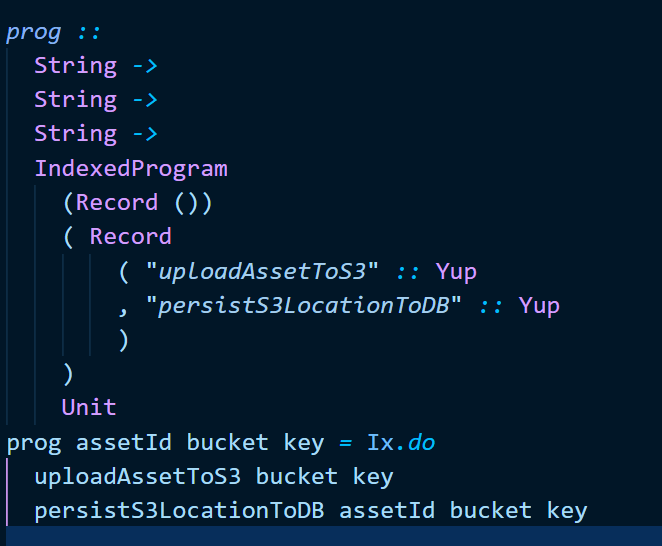 If, however, I invert the order, we get a red-squiggly. 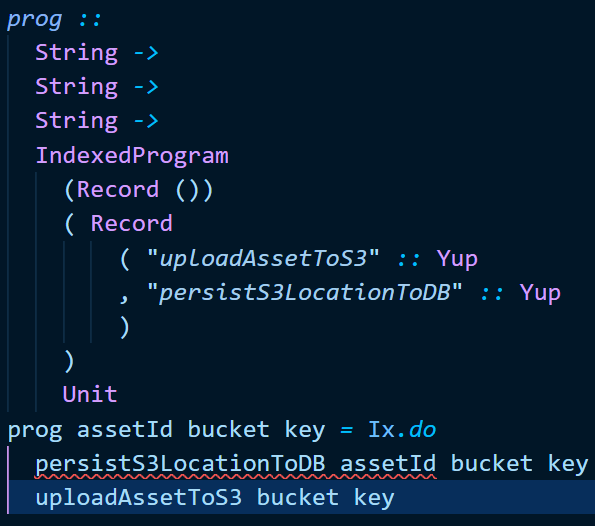 Plus an error message that tells us exactly what went wrong. 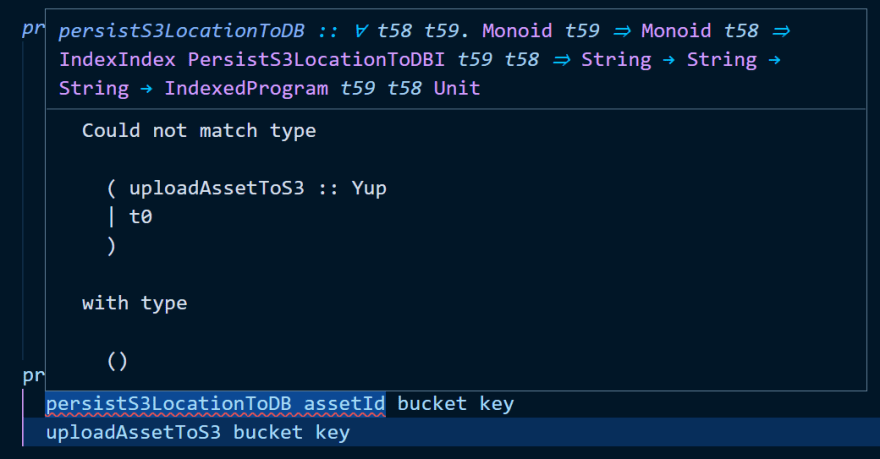 Check out the following program in PureScript where I get quotes from three vendors and only display information after I receive all 3 quotes. 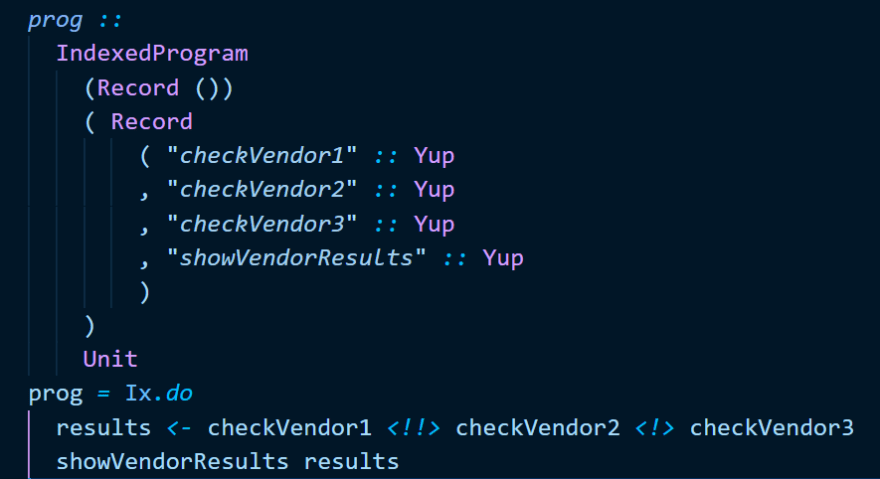 If I change the order of the quotes, it still compiles just fine, as all three are present. 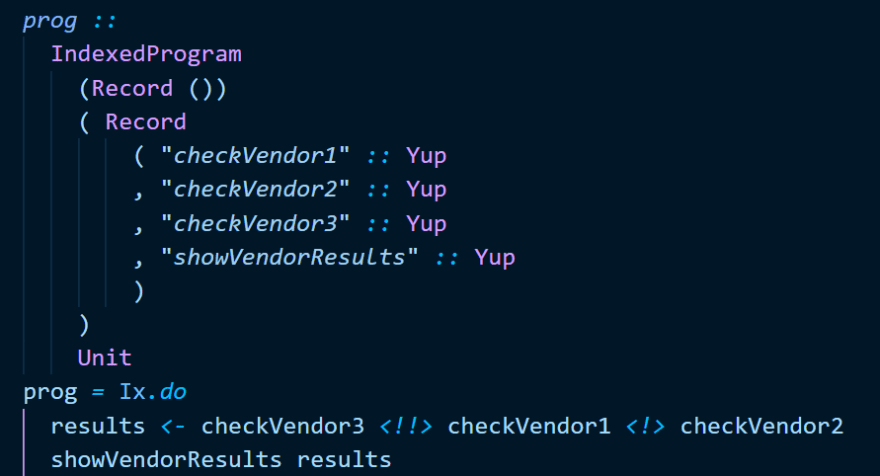 However, if I leave one out, the compiler lets me know with a red squiggle. 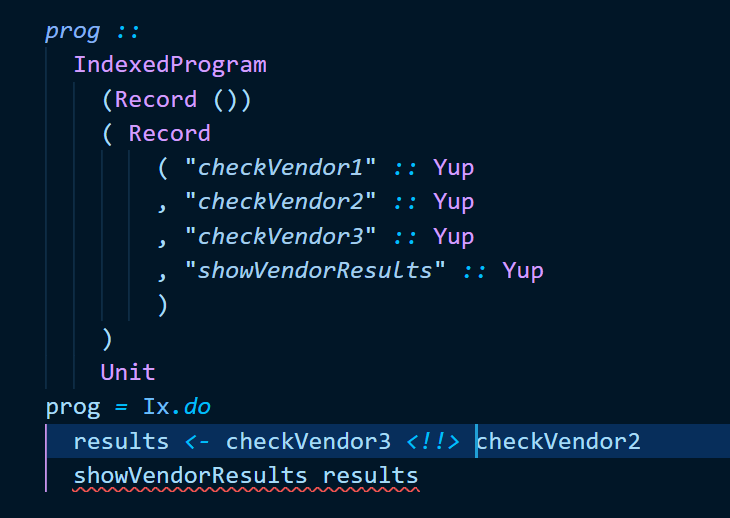 It also lets me know exactly what I left out. 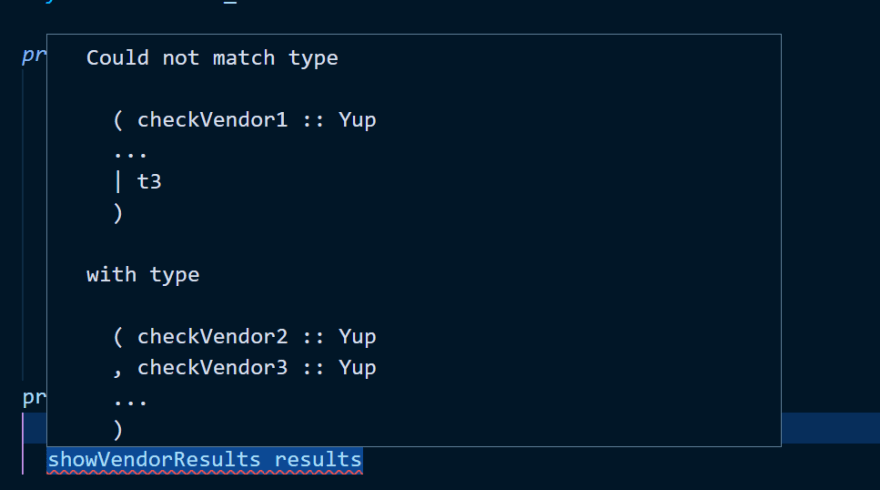 In the next article in this series (that will come out tomorrow), I will show how to build this sort of system from the ground up.

The first article will look at how rows can create "lanes" in indexed monads to allow for indeterminate order of execution where order doesn't matter (ie from our vendor-quote example above) while enforcing certain before-after relationships where order does matter.

The second article will show how these relationships can be consolidated into a type-level transition machine so that they are not defined ad hoc.

The third article will show how these relationships can be built into an ADT that is used to construct an indexed free monad, guaranteeing that they are the only possible outcomes in a given monadic context.

Why You Should Stop Using Loops?

Mike Solomon
Making machines that make machines believe the machines they make are other machines.
12 Chrome Extensions I Actually Found Useful
#productivity #beginners #career #codenewbie
Tell me about your first ever paid line of code?
#career #html #webdev #css
What would you like to know most about the future of the Forem product? Answer for the chance to be featured on our podcast!
#discuss #podcast #forem #meta