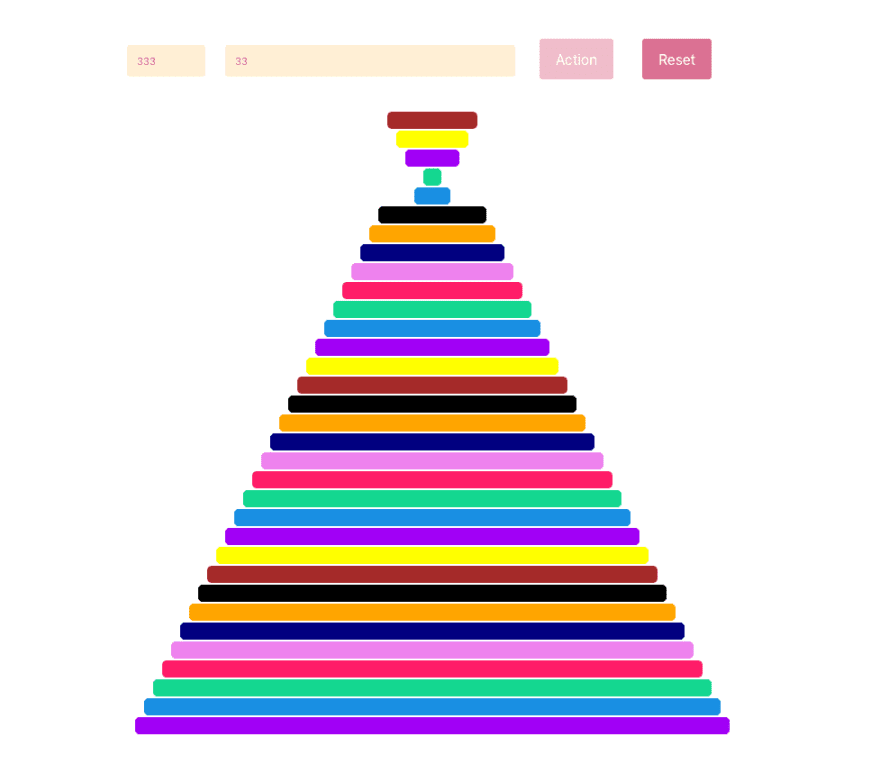 What you are going to see below was suppose to be part of my solution to an exercise given in a coding challenge. It was several months ago and I had signed in for it. Due to unforeseen factors, I haven't gone to the end. Now, after that time and the challenge finished, I can share it here.

This is not going to be a step-by-step tutorial. Rather a quick review of how can we use frameworks like React and Popmotion.io, and an algorithm. And create a nice visualization of that very same algorithm. Somehow it feels nice! 🤓

The so called Pancakes Sorting Algorithm is famous (or not?) sorting algorithm, that you can read about a lot in internet, if interested. Its nature is out of the scope of this article. Here we only see it in action with nice animations, thanks to Popmotion.io.

Here is the live demo you can play with. There are two text inputs and two buttons. In the first input, you enter the time interval
which will be used for each animation round, i.e. how fast each pancake will be sorted. It's in milliseconds, which means if you enter the value 1000, the animation will execute for roughly 1 second. The second input is used to define how many pancakes you want to see sorting. The value there must be between 2 and 50. The buttons are self-explanatory enough. One is for starting the sorting animation, the other one is for resetting it.

And here is where you can find the source code for the demo app. Feel free to check it out and take a closer look. You might try to amend the animations I did. I would be more than interested to see your versions. :)

That was all. Nice and short, perfect for the summer! ☀️ 🏖

The Difference Between Regular Functions and Arrow Functions

Mihail Gaberov
As I pee, sir, I see Pisa!
How to build a chat app with React, TypeScript and Socket.io
#chat #react #typescript #socketio
What should we test (ReactJS Components)
#react #unittesting #javascript