ScyllaDB is an alternative to Apache Cassandra which claims to have 10x higher throughput than Cassandra while remaining the same positive properties of scalability and ease of use. Scylla functions as a drop-in replacement for Cassandra applications using CQL (currently with some disparity in features). Fortunately, my past work in NoSQL schema design for Cassandra only makes use of features supported by Scylla.

I’ve been meaning to do my own tests on Scylla for a while, but recently a faculty member shared about Scylla on our group’s Slack channel and suggested I share some results. I decided to run the same set of experiments I used to evaluate a schema I designed for the RUBiS online auction benchmark. First, several column families are created and loaded with data. Next, the different types of transactions in the RUBiS benchmark are executed while measuring the response time. Before I continue, first a disclaimer that the methodology behind the results is not as rigorous as it could be, but still leaves me skeptical of some of the claims made by Scylla.

These experiments were run using single node installations of Cassandra 3.0.9 and Scylla 1.6.1. While this is not a typical setup, much of the reasons for performance improvements claimed by Scylla (e.g. lock-free data structures and improved memory management) should still manifest themselves on a single node. One of the nice things about Scylla is the scylla_setup command that attempts to configure the OS for optimal performance including benchmarking the disk storing the data directory. This configuration was used for both Scylla and Cassandra and otherwise the default settings were used for both systems.

The first striking difference is that the on-disk size of the data for Scylla (9.8 GB) is nearly twice that of Cassandra (5.2 GB). Despite this, there was not a large difference in load times with Cassandra taking 3 hours 43 minutes and Scylla taking 3 hours 59 minutes. Below is a graph with the write throughput of the SSD storing the data files in each case. Scylla seems to push the drive much harder but it’s able to keep up.

Update : After looking at the number of keys in each table for both Scylla and Cassandra, it seems as though Scylla was storing significantly more data. Stay tuned for updates on resolving this issue. 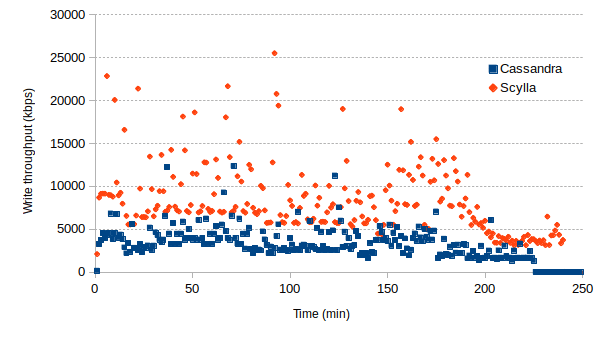 Finally, the results of running the actual benchmark. RUBiS consists of a number of “interactions which corresponds to user requests for web pages. The graph below shows the top eight interactions by frequency and the average response times for both Cassandra and Scylla. I won’t go into a detailed analysis here, but the performance claims made by Scylla don’t seem to play out here. 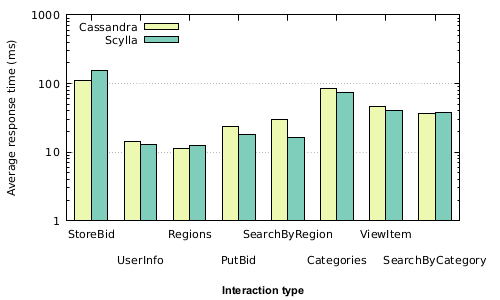 Once suspended, michaelmior will not be able to comment or publish posts until their suspension is removed.

Once unsuspended, michaelmior will be able to comment and publish posts again.

Once unpublished, all posts by michaelmior will become hidden and only accessible to themselves.

If michaelmior is not suspended, they can still re-publish their posts from their dashboard.

Once unpublished, this post will become invisible to the public and only accessible to Michael Mior.

Thanks for keeping DEV Community 👩‍💻👨‍💻 safe. Here is what you can do to flag michaelmior:

Unflagging michaelmior will restore default visibility to their posts.