Hi stranger! This will be a personal post, and will talk about things beyond coding. I hope you like.

This same date last year, I was in my country, Venezuela. Celebrating Christmas with my family and loved ones. I was doing fine, but in case you don't know, Venezuela was really doing fine. And I was looking for a job in other country, to be able to get out of there, and take my family out as well. I was earning $40/mo. Yes sir, you read right, $40 the whole month. With that salary, it's really difficult, ridiculous difficult, to save to be able to travel, through many people actually done it, and leave the country with $200 or less. Still, I knew I could get a job offer and leave with small money, because I will be earning outside.

I was coding a single page application desktop, using Angular and Electron. It was an administrative application to manage the staff in an company. It was my first job in a company, although I was exited, the situation in my country was getting harder and harder.

In February this year, I was called for a company in Cochabamba, Bolivia. And I said, this is it, the way out. I remember when they told me that I was selected, it was actually a program to bring programmers from Venezuela to Bolivia, I didn't believe it. I though that maybe it was some kind of joke, or something. I was speechless.

In April, I was traveling to Bolivia. A new culture, a new country, without friends, family, nor loved ones. I left all of that behind. It was an important step in my life, that I did not take lightly, but needed to be taken.

I enter then this big company, the biggest tech company according to they. It was my first in a big company. I was then trained and introduced to at least one hundred people that week. I entered this React project, with a Meteor server. Until then, my knowledge about JS was limited by TS, Angular and simpler Express applications. But I embraced them like I knew React and Meteor my whole life. Read about half hundred articles, tutorials and books, about React, Meteor, and Javascript itself.

It make me understand, and care about how compilers like Babel or Typescript works, how Javascript works, and then I started to hate it. Javascript is such a complicate language, that allows so many weird things. Typescript offer a way out of that madness, and I took it. But a funny thing happen, the more I learned about Typescript, the more I realize that I was just typed Javascript, and I start loving that very weird things that I hated, and started to see their usefulness.

The situation in Venezuela was not getting better, in fact, I left it in the middle of several riots, and civilian disobedience. It was hard for me to find out what was going on there on the Internet. I develop enough stress to be sick about it, that I was for a week, give or take. First I had a blackout, and went to an hospital for a night, costing $800, that single night. You may think this is not so much money, but remember I told you I earn $40/mo, and by that time I was earning $600/mo, so even if I wouldn't had expenses, still would to save for two months to pay it. I had to take a loan. All the exams that they ran on me went fine, and I left the hospital that same day. Three days latter I had another blackout. I was three days in another hospital, that wasn't that expensive, but still was about $600 those three days. Another loan.

I enter in a state of serious depression after that. Only leaving bed to go to work. I could not know about the situation on my country, because, believe it or not, it was less stressful to not know, that to know. Did I told you that I came alone here? Well, that actually is not true. I came with another contestant of the project, and I lived with him to spare expenses. He left after 3 months of being here, to Mexico or Chile or something, I don't know, but he was gone. And I was alone. Really alone.

I watched Cowboy Bebop in a week, and several other series and anime, because I did not fell well. Then I decide to go. I wanted to go. I wanted to escape. The company didn't wanted to make a proper job offer, we were there as interns, and $600/mo, though more money that I earned in Venezuela, I expend more as well, and it wasn't enough. For real, I rarely leave the bed for anything but work. I was in a bad place.

Then I had a call. A company in Germany was interested in a professional like me. It was a lift up. It really was something. It was like a little note that said: "Hey! You worth something. Actually, you worth so much, that a company in Germany is interested in take you there". I was really exited by that. Eventually, the company decline the offer. But that was enough for me.

The situation in my country didn't get better, but it got out the riots, and manifestations, not a good thing by the way. However, my mom and one of my brothers manage to get out. They couldn't come here, but a good things to know that they are safe, out there. Still, I have two brothers and other family members in Venezuela, in a really complicated situation.

It was August. My girlfriend traveled to Cochabamba, for us to live together, and I was move into another project, inside the same company. It was an AngularJS application, using several servers written in C#. It was my first enterprise web application. It was a really frustrating experience, because we needed to use a legacy application underhood written in in a God forgotten language. Fortunately, my team help me a lot in both, dealing with the frustration, and learning about the application.

I learned a lot, actually. The one thing I like the most, was how the project was organized. They use SAFe, a Microsoft agile framework for enterprise level projects. It is awesome, and though the bimonthly meetings was kind of boring, they allow us to get a really good definition of what needed to be done, and how to do it. I got a rise with the movement to the new team, and was finally able to pay Netflix, and my medical bills.

Then I quit. Actually, Friday 22th was my last day on that work. Why I quit? Maybe that's for other post.

I just wanted to share this with you. This is not a sad story, at least for me. Yeah, there are a couple bad things that happened, but for me, this year was a fucking amazing year. I learn a lot about how to work in an big company, how enterprise projects are manage, and that I don't want that. I learn that I prefer a small team, a small project, and that's one of the reasons I quit.

For 2018, I don't have any expectations. I will allow myself to be surprise. Remember: 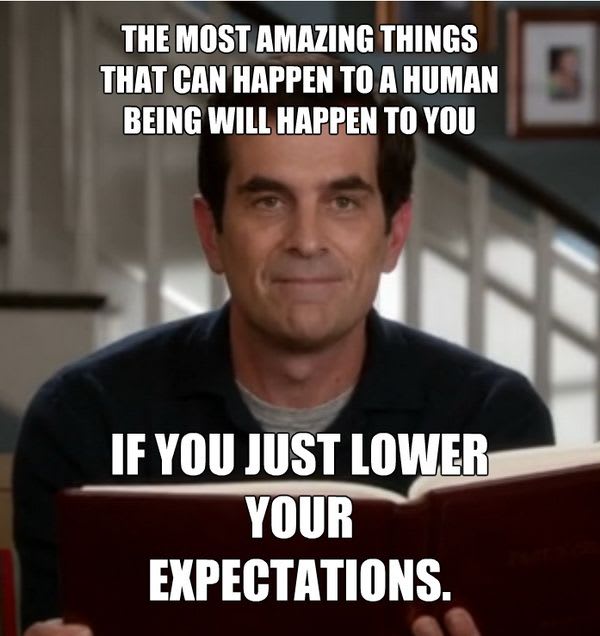 Be Secure and Compliant with GitHub

Michael De Abreu
I’m a developer that do web applications by day, and games by night. I work with Typescript every day, using tools like Angular and React. In this post I like to write about my experiences with those.
What the hell is <!DOCTYPE html>?
#html #webdev #beginners #discuss
Why doesn't useState has a dependency array?
#discuss #react
Side Project Sunday! What do you have going on?
#showdev #sideprojects #discuss #watercooler