In this post I'll try to explain how to get a real integrating between Angular and Electron, and be able to communicate using Electron's IPC.

Use ipcMain is a simple as require it, and use one of the functions that are able for us.

With that, the application will be listening a 'ping' event, and will print ping in the console. Easy peasy.

How to (normally) use ipcRenderer?

In a normal scenario, a simple require('electron').ipcRenderer would give us access to the IPC in the renderer thread. So, following the previous example, we could do something like:

This will invoke the callback function in the main thread.

But, this won't work in the Angular-CLI application. Angular-CLI underneath uses Webpack, and thus the latter will find the require key word, interpret as a call for the Node.js' require function, and will try to resolve the 'electron' module.

A Story about two requires

require as been with us for a while, since the first version of Node back in 2008, almost 10 years. But still is one of the most misunderstand functions in modern web development. With the integration of import and export keywords in Node, several articles was written to explain how the require function currently works. TL;DR: A require function is injected for every file, allowing Node to resolve the dependencies. Later, module builders will look for import and require and will try to resolve modules, assuming that's what you want.

So, now that we know that require is actually a function injected by Node, then how is require able to work in Electron renderer process. You may guessed it, Electron injects its own version of require function in the global scope of the renderer process when it loads the page. So, although it may seems like the same function, it is not.

How to use ipcRenderer in a Angular-CLI application? (Or any application bundle with Webpack)

To use ipcRenderer in our Angular-CLI app, we will leverage on the global scope. No, we won't call ipcRenderer in the global context, although we could make this works, it's not ideal. But I just told that require is a function that Electron injects in the global context. So, can we just use require? No. That's because, as I also told, Webpack will try to resolve the module requirement. There is actually another way to access a global variable, that's with the window object. The window object by default will have all the global variables, including require.

For this example we will expose the ipc as an Angular service, and will create it using angular-cli. We follow the guide about services

This will create our service, and update our app.module to include it in the Angular application.

Then, we write the code. We start by importing the IpcRenderer interface from electron module

But, we don't have any Electron module in our Angular project, how will it be resolved? We'll, actually we don't need to have the Electron module in our Angular project, because as Typescript resolver work, it will look in node_modules in folders that are children from ours project. If you want to be extra safe, or if for any reason this is not a desire behavior, you could install the @types of electron, and it won't load the hole package.

Next, we add a reference property inside the class to save the ipcRenderer function when we load it.

It's important to typed it as IpcRenderer | undefined for compile the code in strict mode, as we may or may not be able to load the ipcRenderer. We now write the constructor, to assign the _ipc in load time.

As you can see, we will first check if window object has a require property. With this we will assume we are inside Electron, then we will try to require('electron'), if for any reason it doesn't work it just throw an error, and the property _ipc will be undefined. Checking require in the window object will allow us to run the service in a regular browser context, in that case the _ipc won't have a assignment value and will be undefined.

You should have Typescript complaining about window not having a require property, so we need to update the project's typings file. Open /src/typings.d.ts and update with the following lines:

Now, Typescript shouldn't be annoying us.

I'll add a couple of functions to the service, just to test that it actually works as expected.

For testing we will call an ipc channel, and make Electron to response us back, and listen that response.

First, we will update our app.component with the following constructor function:

And then we will update Electron's index.ts file, importing the ipcMain module and setting a listener for the ping event, that response pong.

Run the angular app with npm run electron:start and in the electron application run npm start. You should see a pong getting logged. 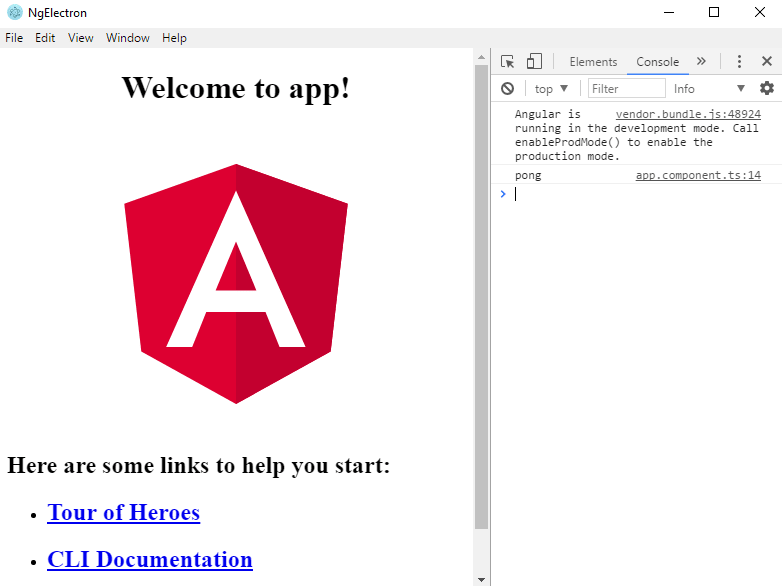 There are still somethings that can be improve in the current workflow, and some of you are having troubles with native modules. But, so far we have pass for a simple Angular app, to a complete Angular/Electron integration. I'll soon uploading all this to Github, to stay tune there as well.

As usual, thanks you for reading this, check out my others posts. Give the post love, and share it with your friends. See you next time.

Michael De Abreu
I’m a developer that do web applications by day, and games by night. I work with Typescript every day, using tools like Angular and React. In this post I like to write about my experiences with those.
How to share styles between Angular Components
#angular #css #typescript
How to prerender your Angular app using Angular Universal
#angular #ssr #typescript #tutorial
Template Forms are just as powerful as Reactive Forms
#angular #javascript #typescript #html