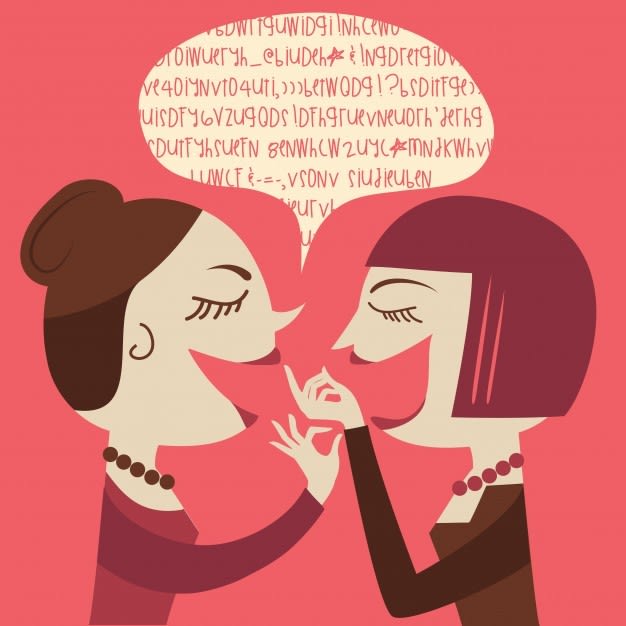 In this post we'll tackle a common issue: communication between system components. With a slightly controversial, themed, domain-driven design.

Let's say our project is an Android app, and we need a functionality that requires two fragments to communicate. You know Android, social distancing between components is the norm out there. We'll use this as an excuse to write an Event Bus.

I chose an analogy for the entire thing: Gossips; It fits with the nature of the library, and the way it'll be used–A global pub-sub component to enable cross-component communication.

The intention of this "experiment" is to explore how expressive programming languages can be. And how close can we model our real world using logical statements and constructs. It really is amusing how software engineers have created such expressive constructs that we use in our code. This experiment is heavily triggered and inspired by JavaFX's Theater analogy.

The spine of almost every event bus out there is a form of the Observer Pattern. And we won't be any different. First, We'll have to make our Observable or the Publisher as it's called in a slightly different context. Our Observable is a source of gossips, in a chatty neighborhood. Where rumors and gossips are the main source of entertainment:

Here we define our interface for the source of gossips. Like any respected event bus, Gossips should be able to publish/spread() events/gossips. We also want users to be able to subscribe/listen() to events/gossips the moment they come out, so that they can react accordingly. For the convenience of our users, we want them to be able to unsubscribe from these types of gossips.

Next, we want to implement the mechanism by which users can interact with our source of gossips. We need to create the Subscription and the Receiver components:

Here we provide our subscripers/listeners with a way to cancel their subscriptions.

And here, we provide our nosy neighbors with a way to stay up to date with the latest screw-ups in the neighborhood. By the social act of whispering and an eloquent psst() function.

Often the two are combined, and we will do just that. Whether it's a good combination of qualities or not isn't relevant to the topic of this article.

Our Neighbors thrive on a source of gossips. They also have their own way/function of reacting to them. Since a Neighbor is both a Receiver and a Subscription to our gossips, it implements their qualities: psst(), and cancel().

Now what's left is to define how our bus actually works, by writing an implementation of our Gossips interface:

We store a set of Neighbors, and we keep them up to date whenever a new gossip is out. We add new neighbors to this set whenever they are interested in listening to our gossips. We also remove them whenever they feel they had enough and want to unsubscribe.

Tying it all together

An example of how it looks like in action is quite amusing:

We define a State object, that lives the entirety of our app's life-cycle. and houses all our gossips, so that we can easily spread and listen to them (don't judge):

We listen to our gossips of interest, in an entry point in our app's life-cycle. Similarly, we can unsubscribe when we feel like it:

We can spread gossips when we need to communicate (or realistically when we're bored):

And we're done! A full-fledged event bus in a really tiny codebase. But we all know that we don't really care about the event bus itself; tell me your thoughts about the metaphor! Are you at all interested in this? Does this trigger you? I'd love a discussion in this topic.

9 Things You Should Do or Know Before Building Native Apps