Decentralized Autonomous Organization (DAO). A DAO is an organization of people, without a leader or governing body. Instead, governed (usually) by the rules of a "smart contract" on the blockchain which determines how proposals are created and votes on them are cast, often with the aid of a crypto token or NFT.

A second part of the DAO is the treasury, most DAOs have a singular wallet or a place to pool resources, that are further used based on decisions voted on by the DAO. However the management and who really has access to the treasury to commit transactions and use funds depends on how the DAO is set up.

DAOs are a new take on a well known system; democracy. DAOs envision a new way for large groups of thousands, potentially millions of people, to propose ideas and dedicate resources to a cause through mass voting. However, not all DAOs are equal, not all DAOs may be considered a "real" DAO, and there are a lot of questions to be faced with new large collectives like this.

So what do DAOs streamline, what problems do they address, and what are the pitfalls and unknowns that they suffer from?

The benefits of a DAO

Most countries across the world have a government of some kind. Whether chosen by elections, a ruling party, or by birthright, a small group of people is proposing and deciding which ideas a country enacts. Although citizens may have some influence over these decisions, citizens do not have a vote on every decision that's made. A DAO changes this.

In a larger DAO without a member limit, this could be scaled up to hundreds of thousands and provide an easy accessible way to cast votes on important decisions without barriers or intimidation interfering.

The purpose of a DAO is to remove this layer of representatives. To remove central figures, group representatives, and treat every decision with an open ballot. Using a crypto wallet to cast votes, this makes collecting and counting ballots instant and completely traceable. There's no chance of forgotten or uncounted ballots, no confusion on which option was chosen, every vote is openly available for every other person to see.

Developer DAO, a DAO with a limit of just under 8,000 members launched less than 4 months ago, put out its proposal to switch from using an NFT to using tokens to vote. In 5 days the proposal has over 1,300 individual votes. In a larger DAO without a member limit, this could be scaled up to hundreds of thousands and provide an easy accessible way to cast votes on important decisions without barriers or intimidation interfering.

When people want to form a collective; whether its a political group, a mass-investment, or an art movement, DAOs can make creating a large organization faster and easier than ever before. With no entry process, no pre-requirements, and no invite needed, a DAO can grow to incredible size and strength very quickly.

By the end of their mission on November 19th (One week after the first post) the DAO had raised roughly $47 million dollars from over 17,000 contributors

ConstitutionDAO was a DAO formed to purchase an original copy of the constitution of the USA. With its first post being on November 12th, 2021, it took less than a week, November 18th, for the DAO to raise over $40 million dollars. Although their mission fell through, by the end of everything on November 19th (One week after the first post) the DAO had raised roughly $47 million dollars from over 17,000 contributors. 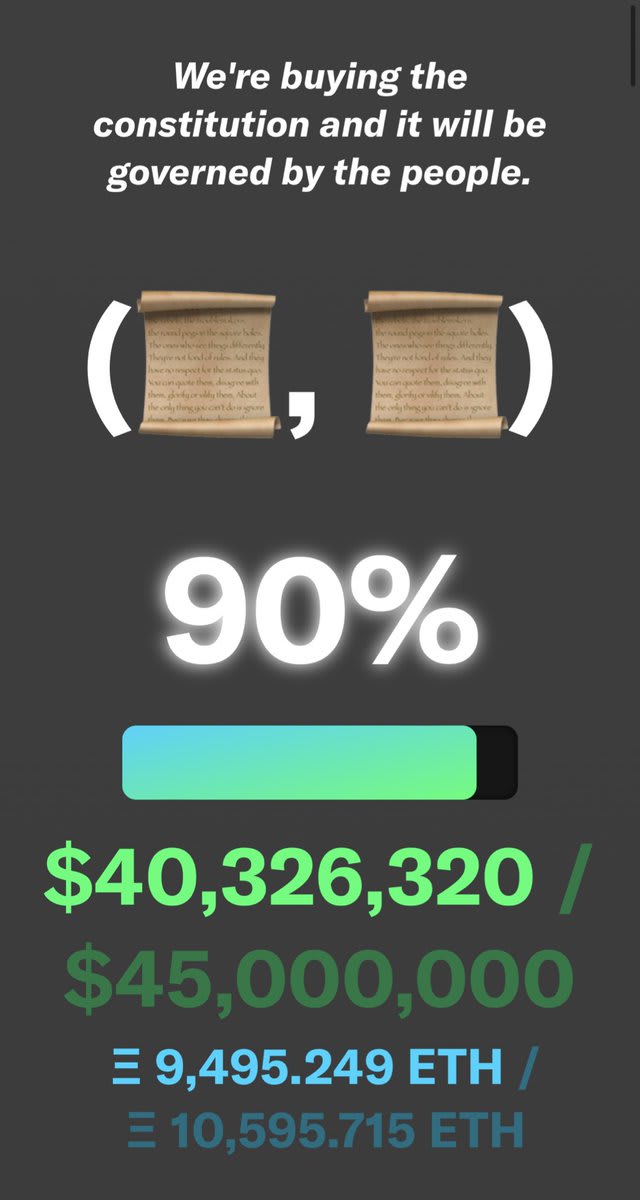 today has been absolutely incredible, but its time for me to slep

see you all in the morning, we tweet at dawn [CHIRPBIRDICON]🌞 #wagbtc

DAOs can create an almost limitless democratic system. With just a phone, an internet connection, and a way to communicate ideas, a mass-movement of people can be created and organized without physical boundaries or issues of corruption and intimidation in the voting system. Nonetheless, like any group initiative DAOs struggle in certain areas and are yet to find a way forward in some common issues.

As with any group of people, there are struggles DAOs face. Many of the biggest issues relating to governance.

When a group is decentralized and autonomous, who really proposes anything? In a group of 200,000 people, does every person have an equal right to simply create a proposal that's voted on? In most DAOs as of writing this; they don't. This means in most DAOs there's a core team, or more often the founding members and occasionally additional members who may have been active and contributing in the group for a long time.

When a decentralized autonomous group has a central team of people leading discussions and proposing ideas, can it truly be considered a DAO? Wouldn't this make it the same as any other governmental system, just with a different voting method? Herein lies a big issue of DAOs and their future, removing central bodies eliminates the risk of corruption and dictatorship, but it creates an unmanageable process of organizing the path forward.

Another issue stemming from DAOs being a massive decentralized organization is votes. Are all votes considered equal? Are all members considered equal? This depends on how votes are issued within a DAO, and this is done in one of two methods: NFTs, or tokens.

NFT voting is based on holding an NFT, with each NFT being unique and representative of one vote. But what about people who hold 2 NFTs? If the NFTs were distributed by sale, doesn't the majority of voting power fall to the richest members? In some cases, yes. Some DAOs such as Developer DAO have a system in which an address holding NFTs gets one vote, regardless of how many NFTs they have. But with the ease of crypto addresses, any person could simply make a new address and hold one NFT on each, massively multiplying their voting power.

The alternative to NFTs is a token. Tokens are not unique. Tokens simply set their supply limit, potentially millions of tokens, and require a certain amount to vote, in the Developer DAO token proposal that means 400 tokens gives someone access to one vote.

This again raises questions of distribution and equality. Crypto is known for being sold, and if governance is sold then the richest members quickly become the most powerful. When token distribution happens, who has a right to it? Do all members receive equal power? Does the founding team receive a bigger allocation and if so, what makes their vote more important? These are questions fundamental to the democratic process DAOs are trying to implement, and in the end the decision falls back to the same people creating the DAO.

Grady Booch, a well respected software engineer, posted a thread detailing many of the governance issues that DAOs will inevitably face.

Nick, I celebrate what you are doing; it is both desirable as well as inevitable.

So, to be clear, there is nothing about your process that bugs me. The point of my OP is…

How will DAOs mature

A consequence that hasn't been seen yet but will no doubt need clarification in time; what happens to a DAO as time passed? As votes are based on tokens or NFTs and these are distributed to a massive group of people, where will these people be in 10 years if the DAO is expected to last that long?

Some studies have shown in the decade since its inception, around 20% of all Bitcoin has been lost in circulation, so what happens to voting power over time? Some will inevitably be lost, some will be consolidated by users who want to have higher influence, people will become inactive or busy or pass away, wallets will be compromised and the voting power overall will dwindle to smaller and smaller amounts.

Another issue that concerns both voting rights and the freedom of ideas DAOs promote, what happens when a member betrays the mission of the DAO? DAOs are touted as a proponent of free ideas and open internet under web3, so what happens when a member, especially a core team member, goes against the tenants that a DAO stands for? If a DAO has a mission of protection of the environment, what do you do with members that support replacing forests with parking lots? If your DAO promotes inclusivity and diversity, what do you do with a member that promotes racism and genocide? When voting is open and accessible to all members, do you blacklist their wallet? Do you attempt to forfeit their tokens and NFTs? Can you prevent a subset of radical ideas become the majority, which has happened time and time again throughout history.

Keys to the Kingdom

One of the largest and sometimes least discussed issues that DAOs face; if a DAO has a treasury, who has access? Many DAOs solve this with a "multi-sig wallet", that is a crypto wallet that requires a certain amount of keys. Similar to a lockbox with 4 different keys to open it, many DAOs operate their treasury in a similar way handing digital keys to a trusted set of members. This raises the same question that's been the core of every issue discussed, is this a DAO? Can this structure really be considered decentralized? What's to stop this trusted group of members growing the DAO, gathering resources and assets in the treasury under the promise of a mission, and swiftly taking it all for themselves?

A treasury wallet can be created that responds only to smart contract code, and if done well this means that only a successful majority proposal vote can ever initiate a transaction from the wallet, as seen in this MakerDAO blog post. As always, it's up to the creators of a DAO how they structure things and if they are willing to take the effort to make their DAO as decentralized as possible and protect what the members entrust the DAO with.

The future of DAOs

Under issues of governance, trust, centralization, and limits of ideas and conduct, DAOs today continue to grow more and more numerous with each gathering larger audiences.

The purpose of DAOs are becoming more diverse with each DAO launched; OlympusDAO creating a decentralized reserve currency which has amassed $1.5 billion dollars in locked value, PleasrDAO funding the collection of rare physical and digital pieces of art including the only copy of Once Upon a Time in Shaolin by Wu-Tang Clan, KlimaDAO creating a treasury of locked carbon credits to use the market to increase the cost of carbon for businesses with over 14 million tones of carbon locked, there's no limit to what DAOs can grow to achieve.

The future of DAOs will see DAOs face new complex challenges, old challenges that have been faced by every governing system, and the challenge of time and how to handle a DAO that matures over decades of members. Only when we look back will we see if DAOs helped create a new wave of decentralized democratic co-operatives, or if the system is simply too decentralized to govern without the DAO collapsing.

what tech stacks do you use?

They say search for a new job while you still have your old job. But when do you think you should start looking?

What do you wish you had time to learn?

Describe the worst job interview you've ever taken part in