Something I really like about FastAPI and Typer, both from the same author, Sebastian Ramirez, AKA Tiangolo, is the super-convenient dependency injection. In a recent project, I wasn't able to use FastAPI, so I decided to roll my own. In this post, I'll describe how. But first, let me show you how nice Tiangolo's libraries are to use:

Typer is for building Python command-line tools. Often you want to be able to call python scripts from the command line with extra arguments to do all manner of automation tasks. Python has a low-level method of fetching the values passed from the command-line using sys.arv which contains a list of arguments:

This would print "Your number was 123"

But this gets a bit complex when you have more than one argument, and particularly with optional arguments as well. It also doesn't do anything to help you produce errors when expected args aren't provided.

Python does have a solution to this though, it comes with a higher-level library for building a command-line interface (allowing for optional arguments, help text, etc) using the argparser module:

As you can see, argparser works by having you write some code to prepare all of the arguments. And gives you an opportunity to define some documentation for these arguments as well. Running it the script using python argparser_example.py --help flag looks like this:

But, there are some drawbacks to this. Firstly, it's quite a lot of code just to accept a couple of arguments, I can never remember how to write these with argparser, particularly how to deal with optional and default arguments. Secondly, you need to define all your arguments before calling the business function (main() in this case), passing the arguments on. While this is fine for some use-cases, in others it's a bit annoying to maintain.

Fortunately there are several other libraries in python's package ecosystem, some of which are more convenient to use or more powerful. One such library I previously used is Google's Fire, while another that I use now, is Tiangolo's Typer

The Typer equivalent of the above code is substantially shorter:

Now, instead of argument parsing having to live by itself, where it's easy to forget and end up with the wrong arguments or mismatched types or help text, instead, the CLI arguments are introspected from the function's arguments including the type hints, and injected by Typer! This is the kind of injection we want to replicate later. The benefit is the CLI arguments and documentation live alongside the function arguments, making it much easier and neater to maintain.

Useful to note that you can run --install-completion to install shell autocomplete! One of the many things that Typer provide in addition to basic CLI argument handling.

It's worth noting at this point that Google's Fire library works in a similar way.

Another example of this kind of dependency injection at work, is in FastAPI, a high-level HTTP server framework, which leverages a package called Pydantic, to automatically decode an API request's parameters, payload, and path variables, saving you from a lot of boilerplate

To compare, we can look at Flask, another popular HTTP server framework, that is often the starting point for new Python students

There's a few things going on here, first, foo is taken from the path, so if I were to hit the server at /foo/hello then the foo argument would be hello. This is nice as Flask handles this for us. The next thing is, it expects a json payload, and I will try to read the "bar" key from it, defaulting to the value 1. So basically I want the payload to look like:

But, there's not much validation here. If I provide a string instead of an int, there wouldn't be an error. If I provided extra values, there's no error. While this is a trivial case to check, imagine you had tens of payload values (potentially even nested structures!) to check, and you didn't want to have to write that out in a big chain of if loop.

FastAPI's approach is to define the data models up-front with Pydantic, and use these models in the arguments of the function. Not only does this allow FastAPI to automatically decode the value and provide it to you, but it also automatically generate documentation!

Here's there's more work pre-defining a bunch of models, but this has several benefits:

Even this tiny bit of code generates a fully-fledged API documentation available when you run the server, complete with descriptions, and correct variable types: 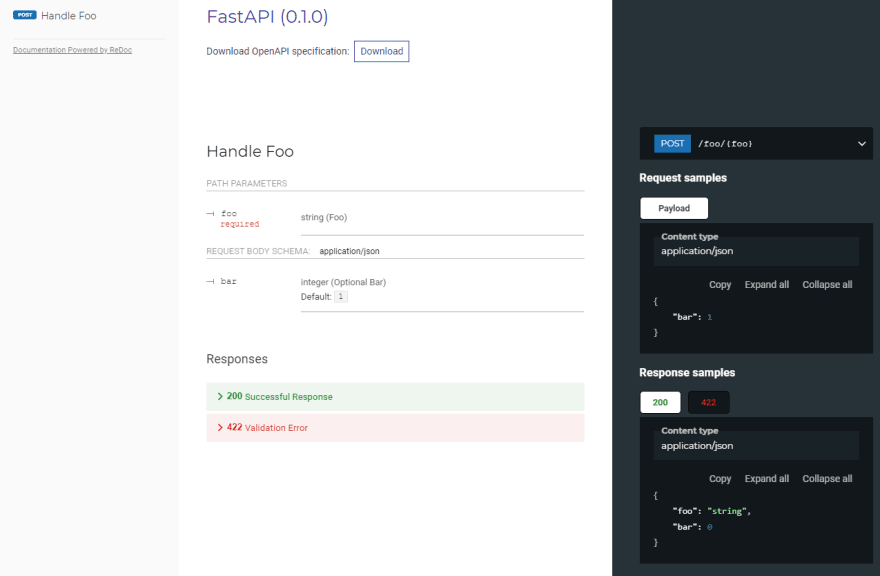 So we've seen Tiangolo's excellent work with dependency injection, making use of Python's introspection capabilities for the code to look at your function's arguments at run-time and figure out what the function wants, and injecting them.

As you can see from not only FastAPI and Typer examples, but also Flask too, that the function is wrapped with a decorator which allows metaprogramming, something Python is fairly strong at. This decorator is what allows us to do this injection, and where we'll put the introspection code.

In this example, we're going to retro-fit Flask with FastAPI-type injection of payload models. This is actually not necessary in real-life because there are many libraries out there that do this or a similar thing already, but this is here for illustrative purposes.

To do this, we first start with our previous Flask example:

For now, this does nothing at all, it passes straight through, but now that the function is being decorated by wrapper, we can start doing stuff to it. Our first job is to detect any Pydantic models in the function arguments. We can do this using get_type_hints() from the typing module, which lets us introspect our function (passed in as func):

Here, this loop is going over all the type hints in the function, and for each of them, it'll test to see if there is a parse_raw callable, and call it with the request.data, inserting the results into the keyword arguments that will be used to call the function later. This is the "injection"!

Finally, since this wrapper can handle the return value as well, we can also deal with that in a similar way, and collect the return value as a pydantic model. To do this we need an extra layer of wrapping due to the way python handles decorator arguments. There's actually neater ways to do this with some built-in libraries, but I'll show it here without:

Now, by annotating the handle_foo() function with @inject_pydantic_parse(response_model=RetModel) the wrapper will check if the return object from handle_foo was indeed the desired respones_model, and then decode this (in this case using the dict() method that pydantic models have, which the rest of Flask will handle turning into JSON for us). Doing a detection for the nominated response model is safe as it doesn't interfere with other possible return values from the function.

While this seems like a lot of extra code, this inject_pydantic_parse() function can be tidied away in a utility module, and now you can decorate all of your Flask endpoints in FastAPI style...

...though, not really. This is a super-simple example and doesn't handle a lot of edge-cases. To use this for real, you'd need to add in more error handling, and perhaps combine both decorators so you only needed one. You might as well just switch to FastAPI if you had the option! (I did not, as I was using Google Cloud Functions, and so this option helped me a great deal)

I Created an Open-Source Music Player 🎵🎶