As a programmer, two of the most useful tools in my day-to-day work are the terminal and a bowl of hot soup. As the weather gets colder, I get soup almost daily from a local Hale and Hearty shop. After realizing how often I was going to their website to view the menu, I decided to do what any self respecting programmer would do and wrote a command line tool to print the list of a specific location's daily soups right in my terminal.

I used this as an opportunity to become more familiar with the Elixir programming language. I find that building small command line applications is a great way to learn a new language while also creating something useful.

By the end of this tutorial, you'll have built your own command line web scraper in Elixir from start to finish. You'll be able to just type ./soup and be presented with a list of delicious (and sometimes nutritious) bowls of goodness.

The complete source code for this app can be found here.

Spec'ing Out Our App

Our app just needs to print the list of soups for a given location. However, we must tell it which one we care about, and we also want to set a default, because once you have a favorite location you'll probably want to view their menu in the future. I'm not going to go to one location one day, and then another the next day - that'd be crazy.

Our app should have the following API:

If you run ./soup without having set a default location, you should be prompted to select a default.

We can break this down with the following flow chart: 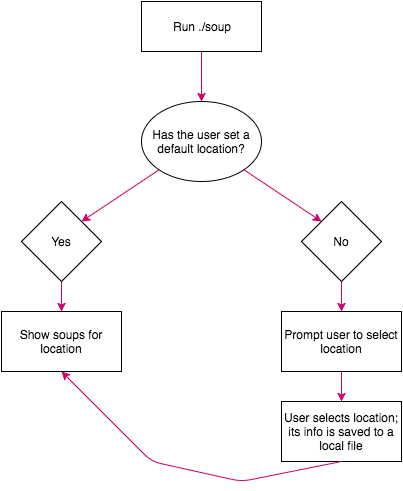 Create a new Elixir app and cd into its directory:

Open up mix.exs and add the following dependencies:

The scraping logic is the most important part of our app, so let's start there. Our first task will be to fetch a list of the locations that we can display to the user.

Create lib/scraper.ex and add the following:

Let's break this function down:

If you're wondering about the & character above, read up on the capture operator.

The one argument is a destructured tuple of the tag name, attributes and children nodes. We convert the children back into HTML so we can use Floki to drill down further and grab the .location-card__name elements. hd() is used to grab the first element of the list, which happens to be the name of the location.

Next we convert attrs from a list of tuples into a map, which makes it easier to pull out attributes by their name. Finally, we return a map of the locaton's name and ID.

That was a lot of typing! Let's see if it works by trying it out in an interactive Elixir session:

You should see something similar to the above (I've omitted some of the results for the sake of brevity.) If not, you may have a typo in the above code.

Now that we've got that working, let's fetch a list of soups for a given location. Fortunately this will be easier than fetching the list of locations. Add the following to lib/scraper.ex:

Once again, let's break this function down:

We've made a lot of progress! Let's build the command line interface.

Note: I've adapted this style of writing the command line interface from the great Programming Elixir book by Dave Thomas.

The first thing we need to do is create a module that'll be called from the command line and can handle arguments.

Create a new module, lib/soup/cli.ex and add the following:

The main function is what will be triggered when we call our application from the command line. Its sole purpose is to take in an arbitrary number of arguments (like --help), parse them into something our app understands, and then perform the appropriate action.

Let's parse the arguments. Add the following to the Soup.CLI module:

parse_args/1 uses the built in OptionParser module to convert command line arguments into tuples. We then pattern match on these tuples and return an atom that will be passed to one of the process/1 implementations defined below:

Let's test this out:

I know what you're thinking: typing mix run -e 'Soup.CLI.main(["--help"])' doesn't seem very user-friendly. You're right; it's not. But we'll only be using it like this while we develop our app. The final product will be much more user-friendly, I promise.

Now that we've got our command line interface in place, we can focus on our main module. The first thing we want to do is to prompt the user to select a default location. Add the following to lib/soup.ex:

This function will be called if the user passes the --locations argument to the CLI, or if there's no default location set when calling the CLI without any arguments. It uses our Scraper module to fetch the list of locations and then pattern matches on the result. If get_locations/1 returned an :error we print "An unexpected error occurred. Please try again.". Otherwise we:

Let's take a look at ask_user_to_select_location/1:

Notice the @config_file "~/.soup" line - this is a module attribute. It refers to the location of the local file in which we'll save our default location.

The first thing ask_user_to_select_location/1 does is take the list of locations, and prints them in the following format:

According to the docs for Enum.with_index/2, this function:

Returns the enumerable with each element wrapped in a tuple alongside its index.

If an offset is given, we will index from the given offset instead of from zero.

Since it returns a list of each location wrapped in a tuple with a number, we can iterate over this using Enum.each/2 to print out each location with the number we've assigned it.

We then use IO.gets/1 to ask the user to select a location. If they've entered a valid value (an integer that's in range of the list), we confirm their selection, save the location name and ID to @config_file, and return a {:ok, location} tuple. If they've made an invalid selection, we ask them to try again.

Notice the use of :erlang.term_to_binary/1. Because Elixir is a hosted language and Erlang already provides functions to serialize and unserialize data, we call the Erlang function directly.

The last step needed to complete enter_select_location_flow/0 is to implement display_soup_list/1.

We pass this function a location map (which if you remember contains the location's name and ID). We fetch the list of soups for that location using Scraper.get_soups/1 and pattern match on the result. If we get back a {:ok, soups} tuple we iterate over soups and print each one. Otherwise we alert the user that an unexpected error has occurred and ask them to try again.

Let's try what we've built so far. Run this in your terminal: mix run -e 'Soup.CLI.main(["--locations"])' and you should see something like the below:

When it asks you to Select a location number:, enter 3 and you should then see something similar to:

Let's move on to building the functionality to fetch the list of soups if a default location has been set. First we need a function to fetch the location's name and ID.

We use Path.expand/1 (docs) to transform a path like ~/.soup into the absolute path of /Users/steven/.soup. Next we read the contents of @config_file and attempt to unserialize the location's data using Erlang's binary_to_term/1 function. If the unserialization is successful, we return a tuple of an :ok atom and the unserialized location map, otherwise we return an :error atom. A failure to unserialize the data likely means that the user manually edited the file's contents.

This is a pretty simple function. We call get_saved_location/1 and match on its return value. If we get back a location map we display the list of soups for that location, otherwise we prompt the user to select a location. This acts as a catch-all for the following error conditions:

Time to try it out. In your terminal, type: mix run -e 'Soup.CLI.main([])' and you should see something similar to:

Remember when I told you we'd make the process of using this app more user-friendly than typing something like mix run -e 'Soup.CLI.main(["--locations"])'? That's what we'll do now.

We'll use escript to do this. From the Elixir docs:

An escript is an executable that can be invoked from the command line. An escript can run on any machine that has Erlang installed and by default does not require Elixir to be installed, as Elixir is embedded as part of the escript.

Open up your mix.exs file and add the following line to the project macro block:

The entire macro should look something like the following:

Now we just need to build the executable. Run this in your terminal:

You should now see a soup executable in your project directory. Try it out with the following commands:

And there we go, a fully functional command line web scraper written in Elixir. Now go out and eat soup until you burst!

Coming to Elixir from TypeScript

A Few Caveats to Running Elixir Tests in Containers and CI

Steven Mercatante
Hey, I'm Steven Mercatante and I build things for the web. I'm a full stack software engineer with over 15 years of experience building websites, mobile apps, APIs, CMSs, and ETL pipelines.
10+ Github Repositories You Should Know as a Developer
#webdev #programming #productivity
Guide to an Effective Code Review
#codereview #codenewbie #codequality #productivity
If you run a Github organisation you must do this now!
#opensource #portfolio #github #productivity