There are many popular license types for open-source software out there, such as the MIT, BSD or Apache Software License. When building software privately, these license types are minor. However, things get way more complicated when building a commercial product, even if it's open-source. For us as a company, that meant a lot of insecurities about how to handle these licenses.

In a nutshell, when using a dependency, you'll need to ensure that the dependency allows for commercial use. That's not a problem with the majority of the licenses, but there are some lesser-known ones that could cause some trouble.

For our tool, the Kern AI refinery, we use dozens of different libraries. Checking all the dependencies manually for all the repositories would be an extremely tedious task, to say the least. So, our machine learning engineer Felix thought to himself "why don't I automate this then?". And that's exactly what he did!

We have a lot of Python dependencies, so checking these licenses was our biggest priority. When it comes to checking licenses of Python dependencies, we've found a really cool tool called LicenseCheck, which can check the requirements.txt file of a GitHub repository and find the licenses for all the dependencies listed inside the file. LicenseCheck can simply be installed via pip and can then be used to print out all the licenses. This already helps a lot, but when you have 50+ repositories, it's still a lot of manual work.

Code snipped from the script

To check all of our repositories, our ML engineer Felix build an amazing Python script that completely automates the whole license checking of our Python dependencies. You can find the whole script here if you are interested in using it!

How does the script work? In a nutshell, you simply paste in the repositories you want to check by putting the name and the URL of the repo inside of a dictionary. Feel free to select as many repos as you like. The script then loops over all the repositories and checks the requirements.txt file from each repo. 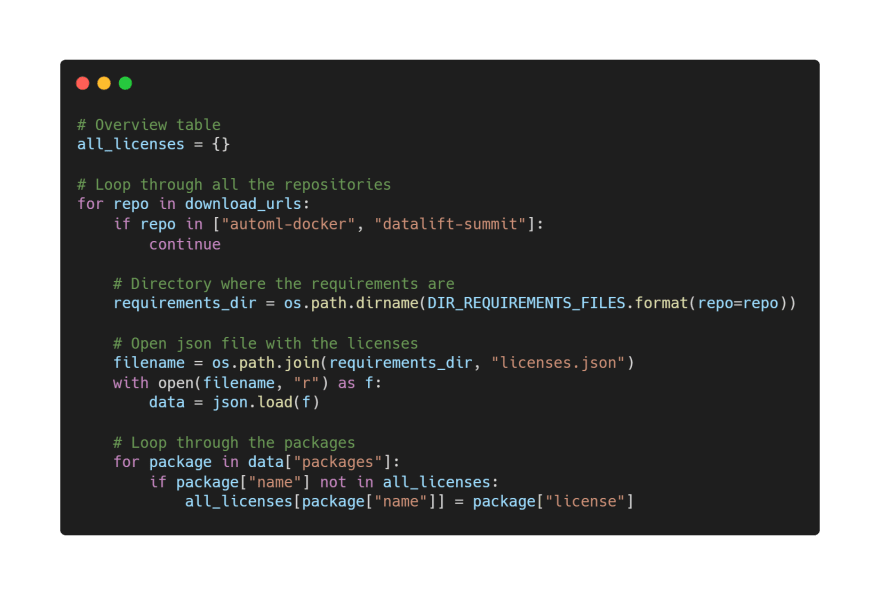 Using the script, you can simply check all the licenses in your repository

Finally, the script then saves all the results into a handy Excel spreadsheet, in which you'll get a list with all your dependencies and the corresponding license.

Python is not the only programming language that we use. Our application is also build with JavaScript, mainly for the UI and the dashboards for our admins. Sadly, the LicenseCheck tool doesn't work for JavaScript or any other language other than Python.

As an alternative, we've found LincenseFinder, which is an awesome open-source tool to check dependencies for JavaScript. The tool checks the package.json file of a repository and tells you the used licenses. You can also create a list of permitted licenses and LicenseFinder will check if your dependencies are in that list. It basically works very similar as the LicenceChecker for Python did.

We hope that you'll find this helpful. Let us know in the comments if you found similar tools for other programming languages as well so that other people can also see them.

Make sure to check out our GitHub page to find out more about our open-source, data-centric IDE which we are building!

Check out our open-source data-centric NLP tool, which helps you to build high-quality AI training data in hours!

Once suspended, meetkern will not be able to comment or publish posts until their suspension is removed.

Once unsuspended, meetkern will be able to comment and publish posts again.

Once unpublished, all posts by meetkern will become hidden and only accessible to themselves.

If meetkern is not suspended, they can still re-publish their posts from their dashboard.

Once unpublished, this post will become invisible to the public and only accessible to Leonard Püttmann.

Thanks for keeping DEV Community 👩‍💻👨‍💻 safe. Here is what you can do to flag meetkern:

Unflagging meetkern will restore default visibility to their posts.