Medusa is an open source headless ecommerce platform that allows developers to create their own customizable and extendable online store. With Medusa, developers can have a fun time building distinctive e-commerce sites.

Medusa is composed of three components: the headless backend, the admin dashboard, and the storefront.

In this tutorial, you’ll set up the Medusa backend server with Docker by running only a few commands. You’ll then install the admin and storefront and link them to the Medusa server.

A Docker image is a template file that acts as a set of instructions to run containers. The easiest way to build a Docker image is by using a plain-text file called Dockerfile that contains all the specifications for creating the image.

Before continuing in this article, you need to install a few tools and software:

Setting up Your Development Server with Docker

Once you have installed the tools from the prerequisites section, you are good to follow along to set up your development server with Docker.

Now that you have installed the Medusa CLI, create a new Medusa project using the following command:

Once the project is created, go to the newly-created project directory named my-medusa-store. This directory will have the following files and folders:

Now, you can find some familiar files like Dockerfile and docker-compose.yml as seen above. The explanation of these files is beyond the scope of this article. For the time being, you should just understand that the Dockerfile is used to build the image for the Medusa server.

In addition to this, the compose file also includes two images, Postgres and Redis, which are essential for running the server.

Now that you have a Docker Compose file, you can run a container. Before running any Docker container, make sure your Docker Desktop is running successfully.

As already discussed, you need to create the image yourself; use the following command to build the image and run containers using that image:

The command will take some time to build the image and run the required containers. If you see the following output at the end, then your local Medusa server is up and running on port 9000.

If you get any error saying ./develop.sh: no such file or directory, then replace the last line in the Dockerfile with the following:

Once done, run the previous command again to start your containers.

Your server database is empty of data as of now.

You can optionally seed your server with demo data. Since the server is running inside a Docker container, you will need to execute the seed command inside that container.

Run the following command in a different terminal to seed your database with demo data:

Once you have the server up and running, you are ready to test your Medusa server. You can go to http://localhost:9000/store/products on your browser to check whether you have set up your server correctly. If you haven’t seeded the database in the previous step, you will see the below output:

However, if you seeded the database, you will see JSON data with an array of products and other details. 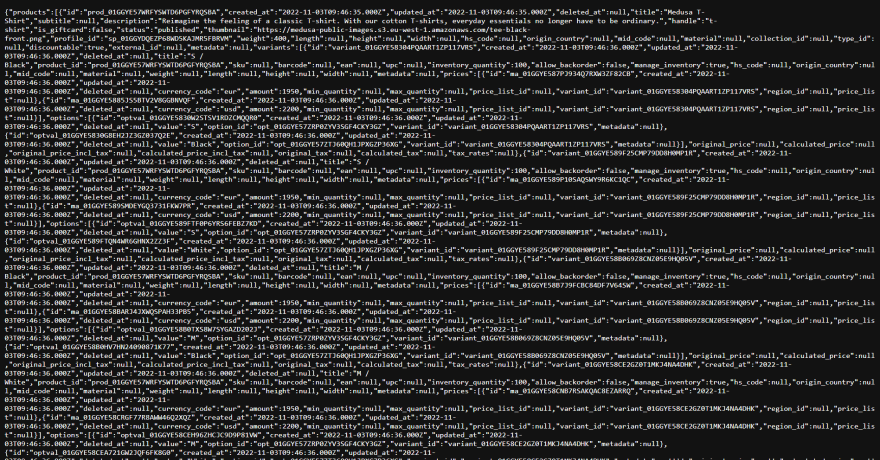 Congratulations, you just set up your first Medusa server with Docker!

Set up your Next.js Storefront

In this section, you’ll to set up your Next.js Storefront to provide your customers with a great experience browsing your ecommerce store.

Next, navigate into the cloned repository folder and get your environment variables ready using the command:

Now you are ready to start up your project using the command:

Once the frontend server starts up, you can visit http://localhost:8000/store on your browser to see your products. Your storefront will look similar to the below: 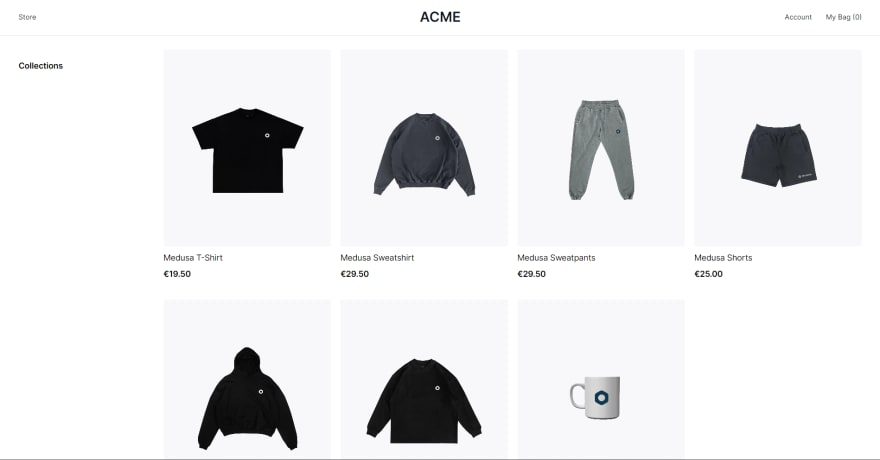 If you look clearly, these are the same products that your server has returned in JSON format.

In this step, you’re going to set up Medusa Admin. Medusa Admin allows you to manage your ecommerce store’s data including products, orders, settings, and more.

To start with, clone the Medusa Admin repository on GitHub and navigate to the cloned repository folder:

Next, install all the dependencies using the NPM command:

Once the development server starts up, you can visit http://localhost:7000 to see your admin panel. The admin panel initially asks you for login credentials. If you have already seeded the data, the admin username is admin@medusa-test.com and the password is supersecret.

However, if you haven’t seeded the data, you can create an admin user by running the below command on the Medusa server:

Once the admin user is created, you can log in and start adding products as shown in the demo below:

Note that in the above demo, the server has data already seeded.

You can add a new environment variable as KEY: VALUE. An example of the same is given below:

Once you run a Docker container using this docker-compose.yml file, your container will have these environment variables already set.

You can learn about adding more configurations to your Medusa server in this documentation.

Docker makes it very easy to pack, ship, and deliver code. In this tutorial, you set up your first Medusa server with Docker by running just a few commands.

Should you have any issues or questions related to Medusa, then feel free to reach out to the Medusa team via Discord.

Data fetching in React with SWR

Check out our GitHub repository to join our community, contribute to Medusa, and learn about our roadmap.

Once suspended, medusajs will not be able to comment or publish posts until their suspension is removed.

Once unsuspended, medusajs will be able to comment and publish posts again.

Once unpublished, all posts by medusajs will become hidden and only accessible to themselves.

If medusajs is not suspended, they can still re-publish their posts from their dashboard.

Once unpublished, this post will become invisible to the public and only accessible to Ashutosh Krishna.

Thanks for keeping DEV Community 👩‍💻👨‍💻 safe. Here is what you can do to flag medusajs:

Unflagging medusajs will restore default visibility to their posts.