In my previous post about inline keyword, I loudly wondered:

I still don't know if a function that's implicitly inline is actually inlined when it's invoked. There is this c++ maxim that says "inline is only a hint and the compiler is free to ignore it". Does that apply to implicitly inlined functions? In other words, if I were to stick a 500 line definition for a function that's defined in the class definition, will the compiler still inline it?

Turns out, this is a valid question because the compiler is NOT guaranteed to inline a member functions that are present in class definitions even though defining them in the class definition implicitly defines them as inline

The answers in this SO clearly states that it's still up to the compiler's discretion to actually inline the calls to this function. I have highlighted the relevant sections from an upvoted answer: 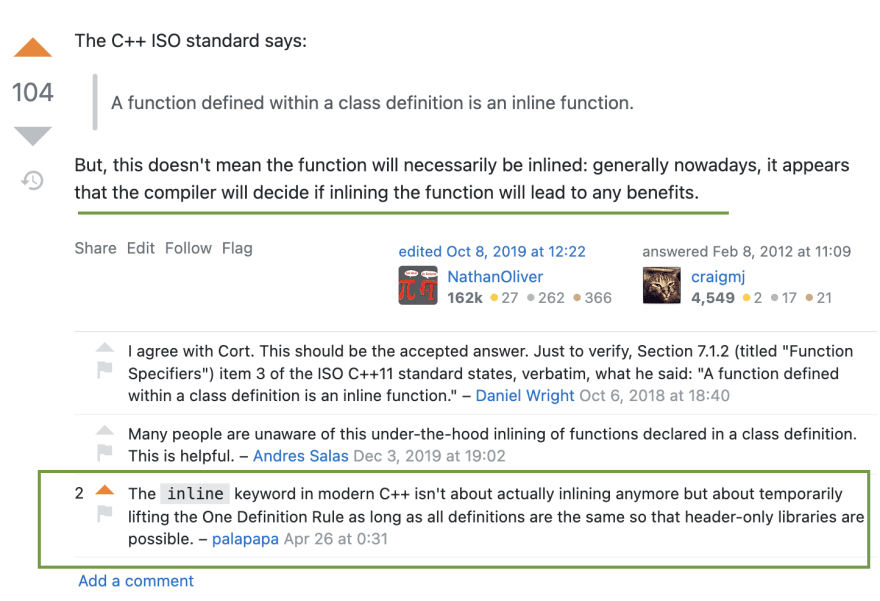 The last comment is more telling because it exactly talks about what was happening to the non-member friend function defined in Foo.h in the previous post. If you were to create a header only library, if you don't use the inline keyword for your non-member functions, you will end up make your library useless. You won't catch this error unless you include your header in multiple sources in your tests (something that's easy to do).

In short, I'm not a fan of this C++ feature. I see SO responses that go to great lengths to explain the feature, but I don't think even the gurus can point to this feature as a strength of the language.

What are string_views and why should we use them?

C++ Projects: From Beginners to Advanced

Once suspended, mdh81 will not be able to comment or publish posts until their suspension is removed.

Once unsuspended, mdh81 will be able to comment and publish posts again.

Once unpublished, all posts by mdh81 will become hidden and only accessible to themselves.

If mdh81 is not suspended, they can still re-publish their posts from their dashboard.

Once unpublished, this post will become invisible to the public and only accessible to mdh81.

Thanks for keeping DEV Community safe. Here is what you can do to flag mdh81:

Unflagging mdh81 will restore default visibility to their posts.