Fetch and the Power of APIs

fetch() is an asynchronous JavaScript function that allows client-side web applications to make HTTP Requests to a web endpoint. This is most commonly used to make API calls from the browser.

Asynchronous functions are known as "non-blocking". Rather than taking up a processing thread while waiting for a return value, non-blocking functions allow other operations to execute in the program. This results in much more responsive applications.

Fetch's asynchronous property is enables it to free the processing thread while waiting for an API response. This is a great way of handing API calls, as responses can vary in speed depending on the destination server and application.

the above example is courtesy of Mozilla

The fetch method is relatively simple. In its most basic form, fetch() has one parameter, the URL of the HTTP endpoint. Other parameters can be added to send data to an endpoint (i.e., JSON for a HTTP PUT request). This enables developers to fully leverage API requests in their front end applications.

In the example above, an HTTP GET request was made, which returns data from the server to the client. After the response returns successfully, the .then() functions parse the response as JSON, then print it to the console. However, console logging is not the only thing that can be accomplished in this function.

.then() clauses can also be used to pull data from the API response and set it as a variable. For example, in the application presented in this example, the responses from freegeoip.app/json are used to identify the location of a user at a specific IP address. The latitude longitude city and region_name fields are all variables that the API returns and are tracked by the application. Here's an example of the JSON data returned by the API:

This JSON blob is sample API response from the freegeoip.app/json API.

Variable assignment in the then() method calls enables stateful updating of the application. Each time that the API is called and returns data successfully, the instance variables are updated, and the DOM is re-painted with the new data. The render() function determines how the page will be displayed each time that the DOM is painted. Not all variables in the application achieve this behavior- only variables defined in the static get properties() method trigger the DOM to be re-painted. Note: you can also generate new variables based on the variables that are returned by an API call. For example, I set location equal to $city, $region_name which is used many other times in the application.

Let's discuss the <location-from-ip> component in more depth. Firstly, the properties listed above populate the component with the data that it needs to render. The data relies on APIs to populate. The getGEOIPData() function includes all of the logic to obtain these data points.

Firstly, a UserIP object instance is created to identify the IP address of the user. This relies on an API that returns the IP of the user making the request. This IP addres data is then fed into another API (freegeoip.app) that takes the IP address from the user and returns location data about that IP address. See the example API response above. After the response is retuned, the given variables are updated which triggers a repainting of the DOM. This update feeds those new variables into a number of services defined in the render() function: 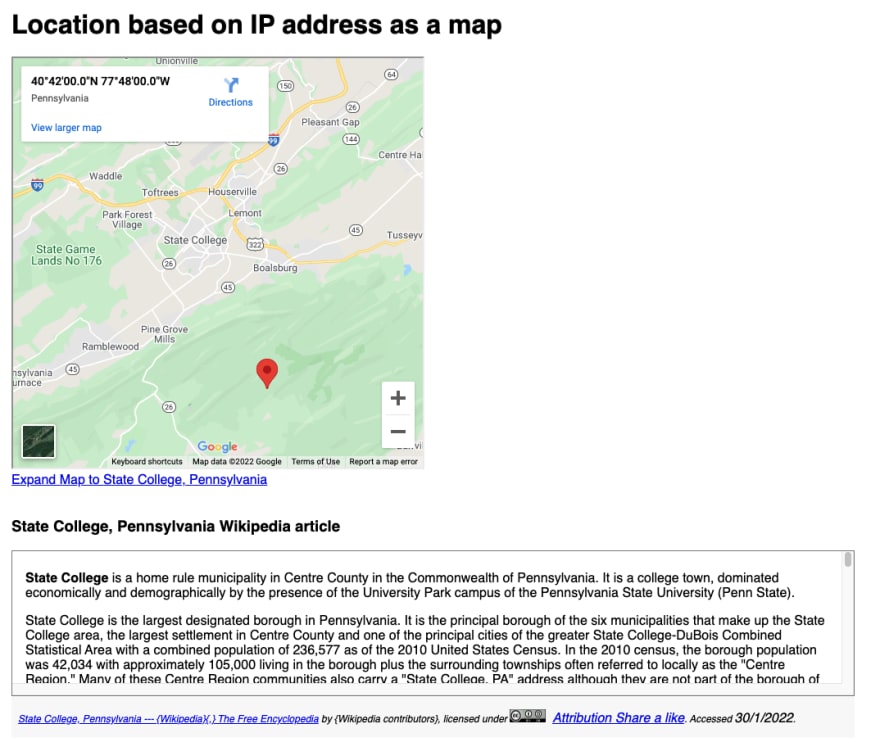 Ultimately, the use of APIs within web components can be achieved with ease and is a great way to add responsive elements to a static site.

Check out the application repository here

Chrome Extensions to make your life with css easy

What conferences/ forums do you look out for?

Once suspended, mayormaier will not be able to comment or publish posts until their suspension is removed.

Once unsuspended, mayormaier will be able to comment and publish posts again.

Once unpublished, all posts by mayormaier will become hidden and only accessible to themselves.

If mayormaier is not suspended, they can still re-publish their posts from their dashboard.

Once unpublished, this post will become invisible to the public and only accessible to Andrew Maier.