It may happen that you need to make a copy of an IAM role in AWS. Maybe you want to experiment with changing role's permission scope but you don't want to touch the role that is currently in use.

One way to approach it is to duplicate the existing role along with all its policies, make the needed change on the new role and run your tests.

There's no aws iam copy-role command though... So your only option is to duplicate the role and its associated policies manually or to script the process.

Here's an implementation of such a script in Node.js. It will make a copy of the role with its trust relationship policy, inline policies and managed polcies (both AWS- and customer-managed).

You can find the code in the repository.

You need Node.js to run the script.

If you don't have Node installed locally, you can run the script in Docker:

To copy a role, pass source and target role names (not ARNs) to the script:

You can inspect the code in the repository if you wish. In a nutshell it uses AWS JavaScript SDK to do the following:

The process is quite straightforward... The only interesting detail is steps 2 and 3 require recursive fetch to accomodate the fact that policies response can be paginated.

Finally, it was a chance to add some ASCII art: 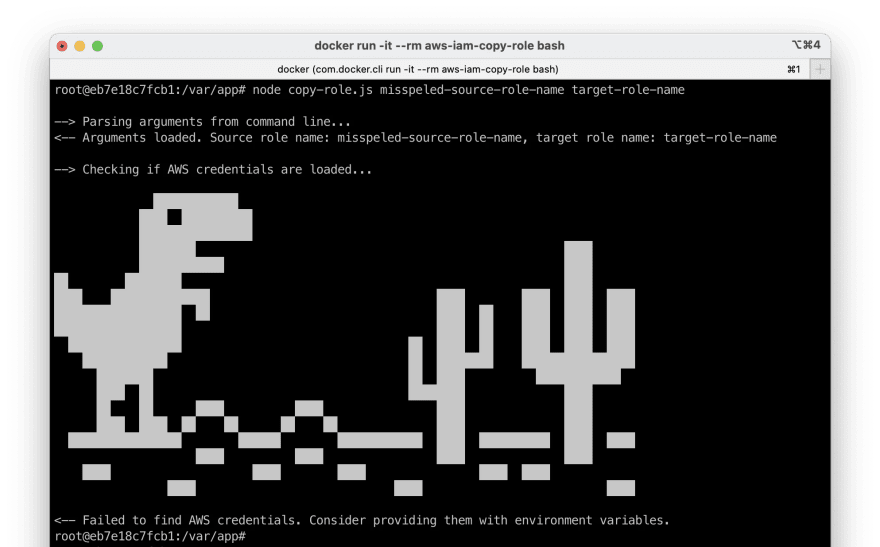 Automate once and use forever they say. Honestly I only needed to use it once so far... 🙃

Can I put it as automate once and share for everyone to use? That makes more sense hopefully!