This article was originally published at https://maximorlov.com/synchronous-vs-asynchronous-callbacks/

Asynchronous code in JavaScript can be confusing at best, and at worst, preventing you from landing your first job or implementing an urgent feature at work.

Just when you started to build a mental model of your program, asynchronous code jumps right in and messes it all up leaving you in utter disillusion.

To understand how asynchronous code works, it's important to know the difference between synchronous and asynchronous callbacks and recognise them in your code.

What is a callback function?

A callback function is a function passed as an argument to another function in order to be called from inside that function. This may sound confusing, so let's look at some code:

In practice, callback functions are often initialised anonymously and inlined in the function call. The following example is equivalent to the one above:

Here's another example you may be familiar with:

Here, multiplyByTwo is a callback function because we pass it as an argument to .map(), which then runs the function with each item in the array.

Similar to the previous example, we can write multiplyByTwo inline as an anonymous callback function:

All the callbacks we've seen so far are synchronous. Before we discuss asynchronous callbacks, let's have a look at the program's order of execution first.

In what order do you think the following console.log statements are printed?

If your answer was:

You got it right! The program starts at the top and executes each line sequentially as it goes to the bottom. We do a mental jump up and down when we call getGreeting to go to the function's definition and then back to execute the callback function, but otherwise, nothing weird is happening.

Now let's have a look at asynchronous callbacks by converting getGreeting to run asynchronously:

In what order do you think the console.log statements are printed this time around?

The right answer is:

This may be confusing at first, especially if you're coming from synchronous languages like PHP, Ruby or Java. To understand what's going on in the background, you'll have to learn how the event loop works.

How can you tell if a callback is synchronous or asynchronous?

Asynchronous functions are usually the ones that do a network request, wait for an I/O operation (like a mouse click), interact with the filesystem or send a query to a database. What these functions have in common is that they interact with something outside the current program and your application is left waiting until a response comes back.

Conversely, synchronous callbacks are executed within the program's current context and there's no interaction with the outside world. You'll find synchronous callbacks in functional programming where, for example, the callback is called for each item in a collection (eg. .filter(), .map(), .reduce() etc.). Most prototype methods in the JavaScript language are synchronous.

If you're not sure whether a callback function is executed synchronously or asynchronously, you can add console.log statements inside and after the callback and see which one is printed first.

Learn how to write asynchronous code in Node.js

Write clean and easy to read asynchronous code in Node.js with this FREE 5-day email course.

Visual explanations will teach you how to decompose asynchronous code into individual parts and put them back together using a modern async/await approach. Moreover, with 30+ real-world exercises you'll transform knowledge into a practical skill that will make you a better developer. 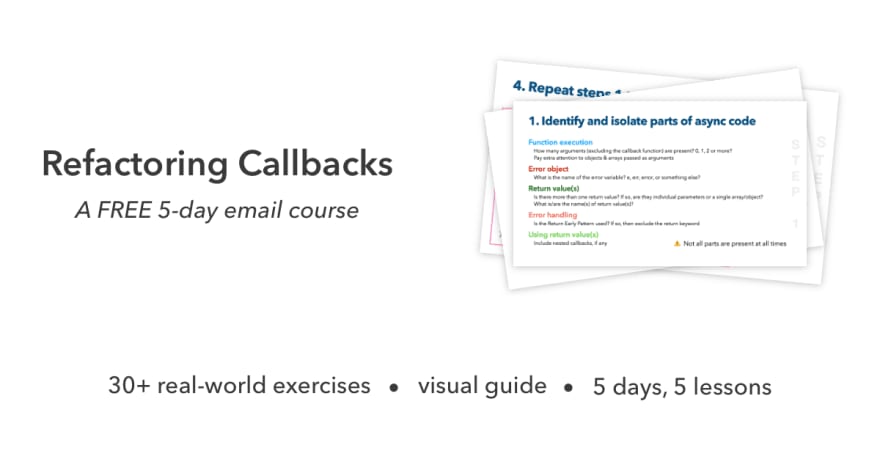 Why I Started The Odin Project and You Should Too.