Few weeks ago, I noticed while browsing Twitter that Ryan Cavanaugh had some issues with his microwave : 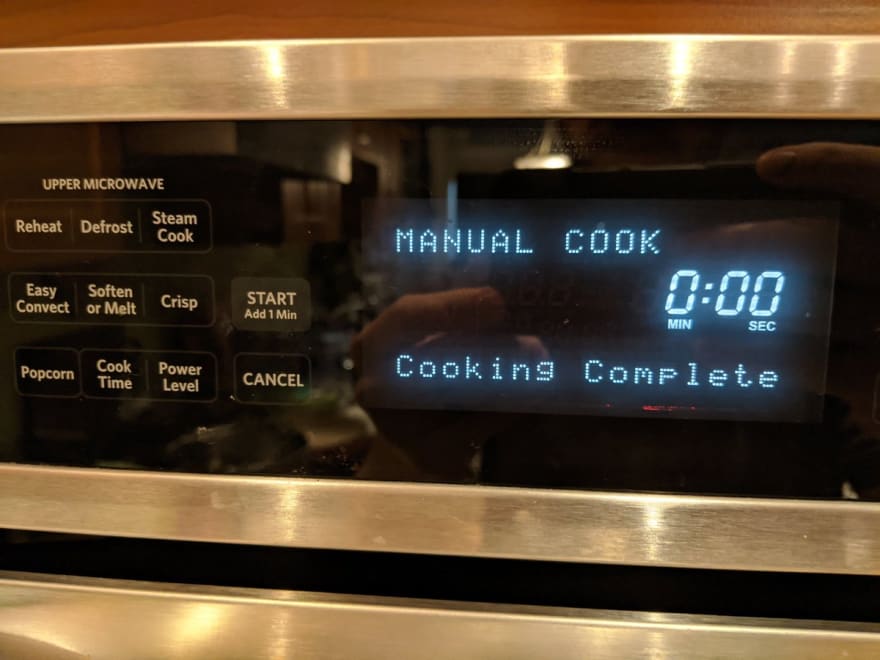 My microwave has multiple software bugs, seemingly caused by race conditions. Sometimes cooking ends with the clock not at 00:00. Sometimes the cooling fan doesn't turn on (!). Sometimes a button registers a beep but doesn't do its assigned function. Disturbing.

First, let's define the scope and requirements of our microwave.

As a user, I want my microwave to:

Typescript has to be our default 🙏.

We'll use only 1 library: RxJs.

As you've noticed in the requirements, a microwave is time based and also look like a state machine. RxJs will come really handy to handle such a case 🚀.

Before we start sketching out our main data flow, I'd like to clarify the difference between the state of our app VS the streams we can use.

A common pitfall I see quite often with RxJs is when someone creates a lot of Subjects or BehaviorSubjects to hold some state. It's making things quite hard to follow and then we have to combine multiple streams to build our main state using for example combineLatest.

While this could work nicely for a few streams, the more streams you add, the hardest it'll be to maintain. A pattern like Redux can instead be used and makes things much simpler to reason about. We'll discover a diagram in the next part to visualize this.

Before implementing all the "details", we'll think and sketch our main stream. Based on the requirements explained earlier, we know that the state of the microwave will change based on 4 different actions: 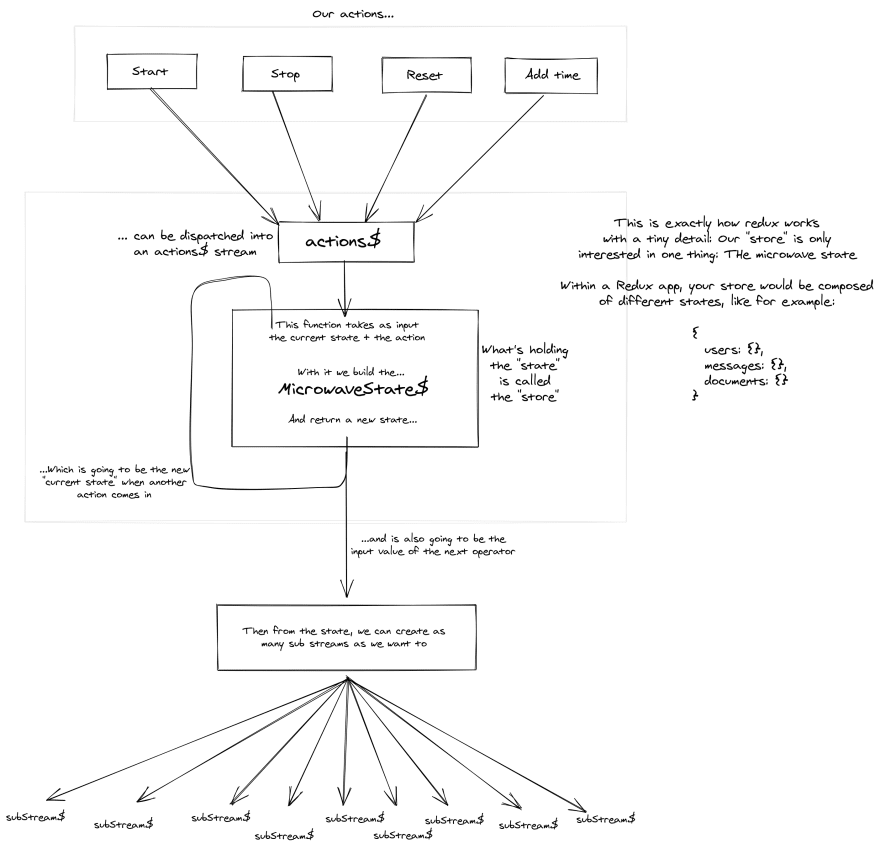 Let's now transform the above diagram into some code.

We are now aware that we need to create 4 actions.

Actions are simple objects with:

In a very simplified way, we could write them as such:

But thanks to Typescript, we can improve that code by building on top of it to make it type safe to:

Let's move on to the part where we need to handle them.

Before we define our reducer... What the fork is a reducer?!

Let's take a quick look to our previous diagram: 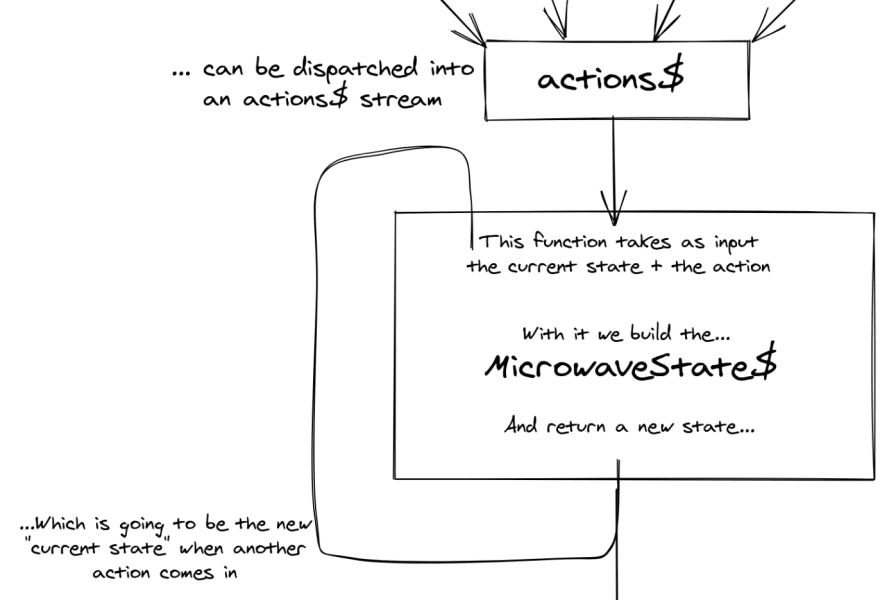 In the picture above, the reducer is the black square holding the microwave state. As you can notice, every time an action is being dispatched, the reducer will be called.

It is a simple function which:

A reducer must be pure:

We said previously that our microwave will have 4 actions available to change its current state (add time/start/stop/reset). But can the microwave status be the same as all these actions? Is it a 1-1 relationship? No, it isn't. The add time action shouldn't change the current status of the microwave.

Lets define the MicrowaveStatus for that purpose then:

Now, we need to think about how to hold the internal state of the microwave. What data does our microwave need to work internally?

Of course, it'll need the status we just created so we can start with:

It'll also need to keep track of how much time the user plans to use it (when adding time through the add time action):

And finally, we need to keep track of how much time has been spent already with the microwave in the STARTED status.

You may now think:

Why is onAndOffTimes an array of numbers instead of just the time elapsed in the STARTED status?

Lets think a bit about how a microwave works:

At no point in that workflow you press a button to keep the microwave running every second. Well, this is exactly the same for our actions.

Actions represent how we want to interact with the state and every computation should be driven from the state downstream.

In this case, we keep a record of the timestamps when the user toggle the microwave on and off. Later on, we'll see how to compute the elapsed time. In the meantime, we can still prepare the interface that will be consumed publicly when we subscribe to the microwave stream. It is pretty much the same except that instead of onAndOffTimes: number[] we'll have timeDoneMs: number.

Here's another diagram to visually represent what we're building: 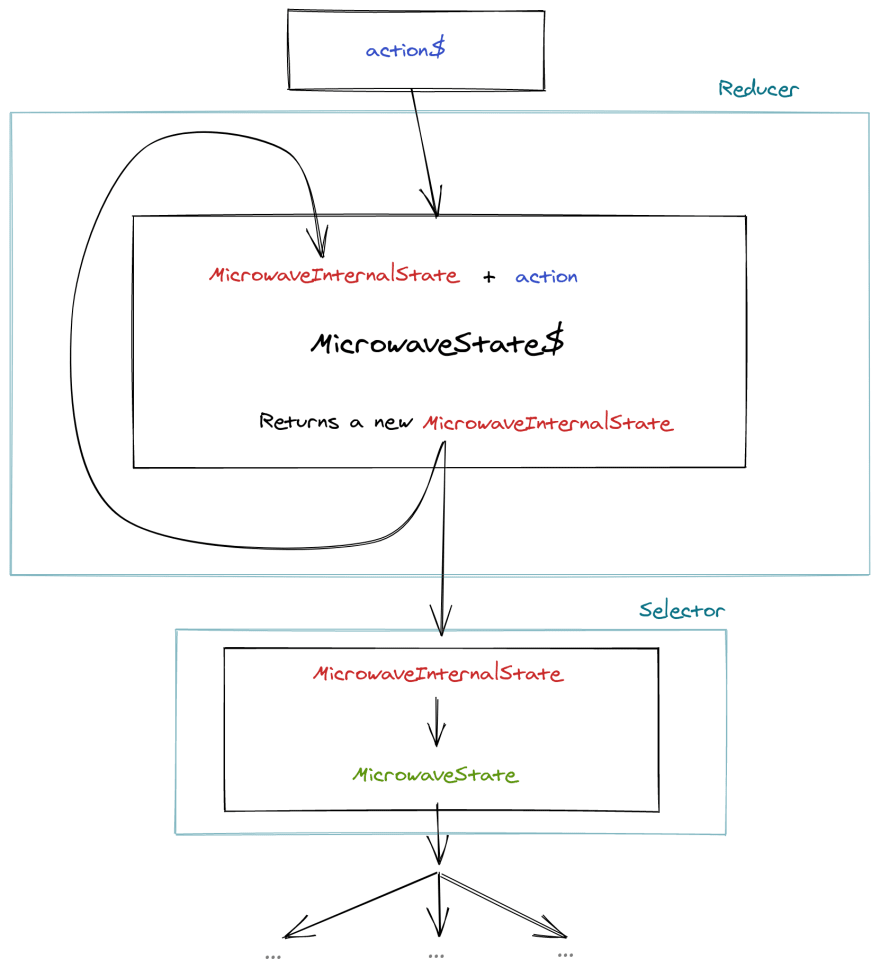 Now that we've understood the architecture we're trying to build and especially the role of the reducer function, we can start implementing it.

If you refer to the previous diagram, the reducer is a (pure) function which takes 2 parameters: The MicrowaveInternalState and an action. We'll see later on how to attach the current timestamp to each action (without having to pass it manually all the time). For now, we'll assume the current timestamp is passed within an object, next to the current action.

Before we start implementing each case, note the use of a switch statement and the call in the default of unreachableCaseWrap.

As the action.type is a union type, every time we handle one case and return a result (hence stopping the switch), Typescript is smart enough to narrow down the next possible type. By having an unreachableCaseWrap function to which we pass the action.type, we can ensure that we don't forget to implement any type in our switch 🔥! Otherwise Typescript would throw an error at compile time.

By saying that unreachableCaseWrap takes as an input a value of type never, if within our switch statement we're not handling all the different possible types, Typescript will notice that we're trying to pass a value which is not of type never.

Cool! Now let's move on to implementing our reducer. Remember, we have to return a new state, without mutating the previous one. We want this function to remain pure.

Does this mean we've got to deep copy the whole state? Isn't that going to be really expensive?

Nop 😁! And thanks to ES6 we can easily do this using the spread operator. Here's a tiny example:

And we can use the same syntax for arrays. Instead of using methods which mutates the array, like push for example, we can do the following:

As we're not deeply copying our entire state, this kind of copy is as efficient as possible. We reuse all the objects that we're not modifying and instead of making a deep copy, we just pass their reference.

Now that we know how to create an updated version of an object without mutating it, lets take a look to the full reducer:

Once again, our function is pure 🙌. Easy to understand, not a single side effect, for any input we're able to expect a given output and easily testable. Fantastic!

As a reminder, here's how the selector should look like:

Just like a reducer, a selector must be a pure function.

We don't really care about the computeTimeDoneMs. It gives us how much time did the microwave spent running from the onAndOffTimes array. As it's not what we want to focus on today, here's the code without further explanations:

We now have all the logic for our state and our selector. We can start working on our data flow using RxJs streams. For that, we'll start by creating a factory function which for a given action$ observable, will return a MicrowaveState observable.

As a first step, we'll create the function and manage the MicrowaveInternalState using our reducer:

In less than 5 lines, we've got a fully reactive approach to manage our internal state so far 🤯.

This is one of the reasons why RxJs is powerful and worth learning. But as nice as this is, it's probably a lot to process already! Lets go through it together:

So far we know the current state of the microwave, how much time is left, and we've got an array with the timestamps of when it was toggled STARTED/STOPPED.

How can we get an update every second to represent the state of the microwave while it's running (started)?

For the MicrowaveStatus.STARTED, it's slightly different as we need to update the stream every second (for the countdown):

Note that before that inner stream, we've got:

So when microwaveState$ emits new value, we'll kill all that inner stream and start a new one, which is exactly what we want.

Notice the subtle changes above?

This is the last part 🥵. Hang tight!

We have 2 stream to represent:

When someone calls the createMicrowave factory function, they'll get a stream representing the microwave. But what if they start dispatching actions without listening to the microwave first? Nothing would be taken into account which is unfortunate.

To fix this, we put publishReplay(1) at the end of microwaveState$. This operator is quite powerful and brings the following features:

The last one to understand is shareReplay({ bufferSize: 1, refCount: true }). It's applied as the last operator of the microwave$ stream. When someone calls the createMicrowave factory function and subscribe multiple times to the microwave$ stream, the microwaveState$ won't be re-triggered (as explained previously it's been shared), but for microwave$ we'd have the whole selector and observable chain for the started state running 1 time per subscriber. When we create an instance of a microwave using the createMicrowave, we should be able to subscribe multiple times to it without triggering that logic multiple times. Therefore, we use shareReplay. We set the bufferSize property to 1 so that if someone subscribes later on, he'll get the last value straight away. We set the refCount property to true (which is very important), so that if the microwave is started but no one listen, the whole observable chain with timer, timestamp, microwaveSelector, takeWhile, endWith will NOT run. Only if there's at least one subscriber. And if more than one, they share the results 🔥.

On one hand, working with observables and thinking reactively can be very challenging. There's a steep learning curve and the concept is very different from imperative programming.

On the other hand, RxJs is very powerful and once we get used to it, it becomes easier to write complicated workflows.

If you've found a typo, a sentence that could be improved or anything else that should be updated on this blog post, you can access it through a git repository and make a pull request. Instead of posting a comment, please go directly to https://github.com/maxime1992/my-dev.to and open a new pull request with your changes.

Software engineer. Trying to share more on dev.to about my discoveries and side projects. Favourite stack: Typescript, Angular, NestJs.