It's been 11 amazing years with ups and downs, where we enjoyed each other's company and had a lot of fun facing together new experiences.

On December 15, we will say goodbye.

Especially, when it involves a trustworthy "partner" that doesn't cheat on you and is always there to make you happy whenever you need it.

On December 15, GitHub plans to turn out the lights on Atom.

It was released as a free and open-source, deeply customizable, yet easy-to-use code editor. And I loved it. 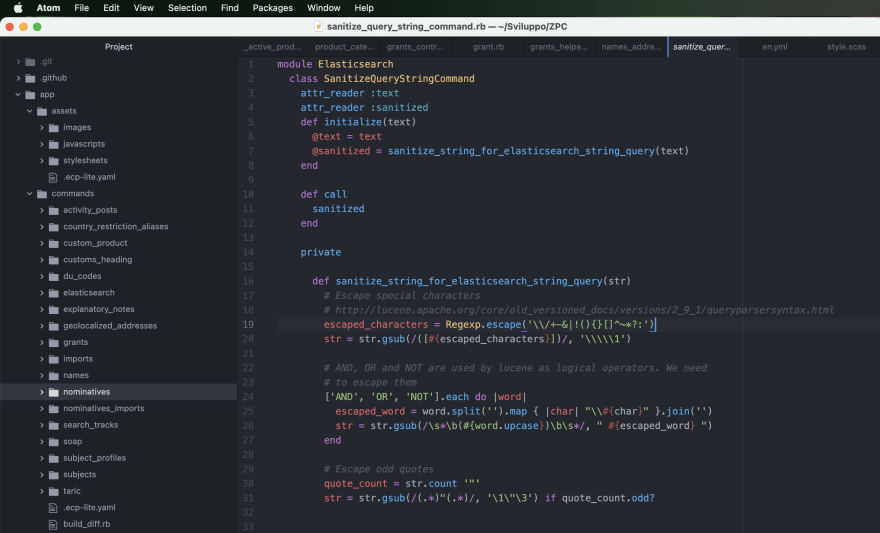 Back then there wasn't much wiggle room to handle code written in multiple languages within the same interface.

Atom was designed by Github to accommodate the needs of every developer thanks to its built-in package manager that lets you install different language interpreters and plugins like autocompletion features and so on. 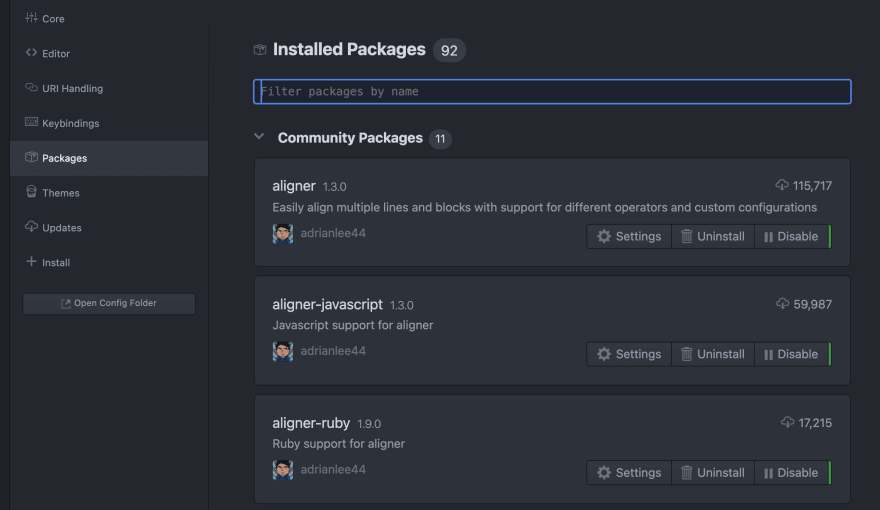 Moreover, you could directly tweak the UI and features to your liking with HTML, CSS, and JavaScript.

It quickly gained popularity, but hasn’t had any significant feature updates, except for maintenance and security patches. This is why its popularity dropped, as you can see from the Google searches from 2011 until now: 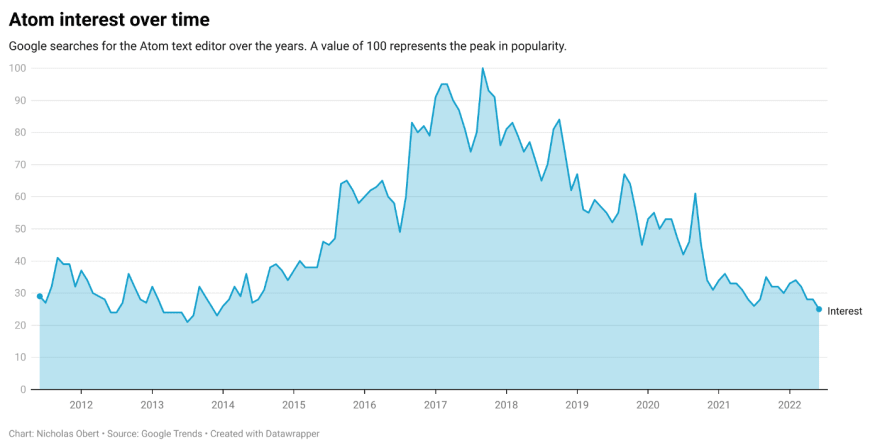 So, here I am, flirting around with yet another code editor (hoping this time it will last forever). Before revealing its name, let me explain one thing...

Prerequisites before choosing a text editor

As you might know, I am a professional backend developer and I'm also learning Vue.js. I write production code daily and I have very little patience towards slowliness of my working tools.

What code editor did I choose? 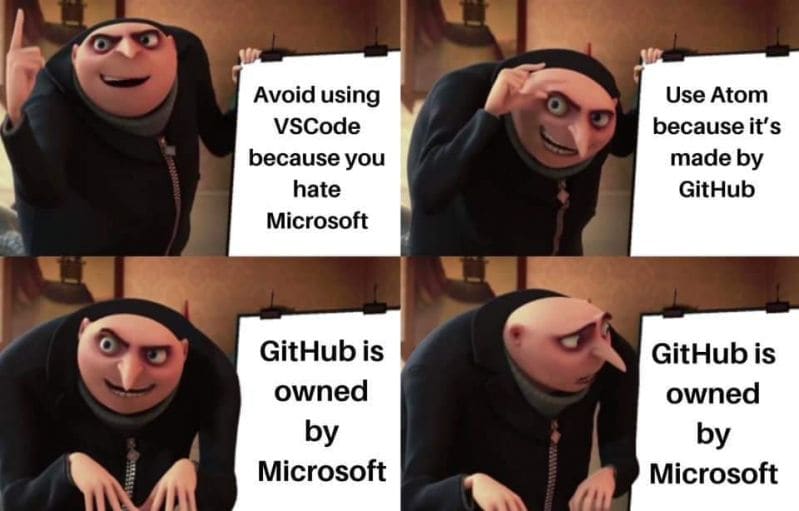 Well, Atom was developed by Github, and Github was acquired by Microsoft in 2018. By transitivity, I realized that if GitHub turns out the lights on Atom, it will focus on Microsoft's proprietary software (Visual Studio Code).

So, I did a little research.

How is Visual Studio Code adopted by the community?

By 2016, VsCode ranked 13th among the top popular development tools on Stackoverflow. It reached the #1 spot according to the 2019 Developers Survey, with 50% of 87,317 respondents using it. 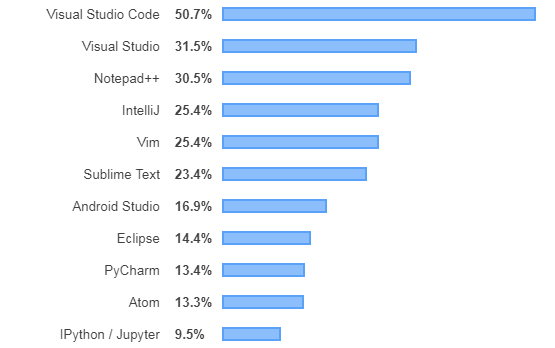 I was almost convinced.

After an internal battle between my mind and my computer (a 2021 Mac Mini) that lasted several weeks, I decided to give it a try...

And fuckity fuck.. there we go! 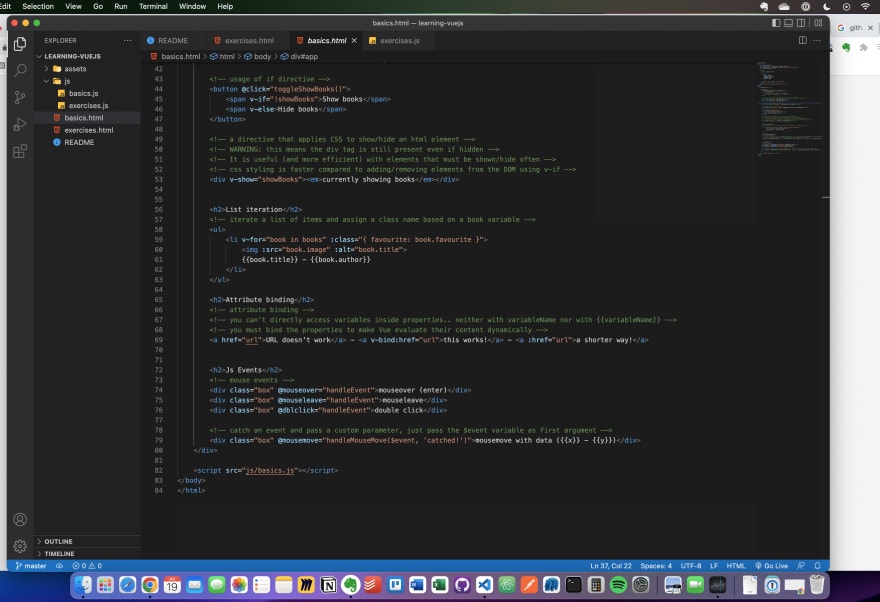 Am I liking it? Yes.
Is it fast and reliable? Yes.
Does it meet all the prerequisites? Yes.

So, Visual Studio Code has become my official editor as Ruby backend developer on a Mac computer.

Our kids will be amazing :-)

Now, I'd like to give you a few suggestions.

How to set up Vscode for maximum productivity

The extensions I'm using are...

What's your favourite IDE? Let me know in the comments.

✍️ Writing your own article is easy (we even support markdown).

Share with me your python automation ideas for your computer

Run a Power Automate flow with an HTTP request

Once suspended, mattiaorfano will not be able to comment or publish posts until their suspension is removed.

Once unsuspended, mattiaorfano will be able to comment and publish posts again.

Once unpublished, all posts by mattiaorfano will become hidden and only accessible to themselves.

If mattiaorfano is not suspended, they can still re-publish their posts from their dashboard.

Once unpublished, this post will become invisible to the public and only accessible to Mattia Orfano.

Thanks for keeping DEV Community 👩‍💻👨‍💻 safe. Here is what you can do to flag mattiaorfano:

Unflagging mattiaorfano will restore default visibility to their posts.