What are Lambda Layers?

Creating a Lambda Layer with Docker

For this post we're going to create a layer using Flask as an example. Creating a Lambda Layer with Docket has four main steps:

The next few sections will describe each of these steps in more detail. The last section will show how these steps can be combined into a single bash script to make deployment even easier.

Setting Up Your Layer Directory

The first step is to build the local directory structure that will contain all the artifacts for our layer. In the terminal enter the commands below. A new directory called flask-layer is created along with a subdirectory python/lib.python3.8/site-packages where we will install our Python packages to.

If you want to create your Layer for multiple Python versions you can repeat the last command and change "python3.8" to whatever other version of Python you want to include.

Within the flask-layer directory create a requirements.txt file that includes the following.

One thing to be aware of with layers is that when they are loaded into your Lambda function they cannot exceed 250MB in size. A Lambda function can include up to 5 different layers. Given these limitations, having smaller layers you can mix-and-match across your functions is preferable rather than building large, single-purpose, layers.

Installing the Requirements with Docker

After running the command you should see the site-packages directory you created in the previous step populated with all your dependencies.

If you have additional versions you want to create your Layer for make sure you substitute the occurrences of "python3.8" with the correct version you want to use.

Uploading Your Layer to AWS

AWS requires all the layer code to be in a zip archive, so we need to zip everything in the python directory.

All the contents of the python directory are included in the zip archive called flask-layer.zip.

Now the layer can be uploaded to AWS using the AWS CLI. You need to provide a few parameters in this step:

Enter the following into the terminal to publish our layer to AWS:

And with that your Flask layer is published to AWS! Now let's simplify this process a little more by packaging some of these steps into a single bash script.

Creating Your Own Lambda Layer Directory

To manage my layers I created a single bash script packaging most of the steps above together to make deploying layers easier. I have a directory where I manage all my layers. Below is a sample of those layers. Each layer has its own directory and the create-lambda-layer.sh script handles installing the layer dependencies and uploading them to AWS. 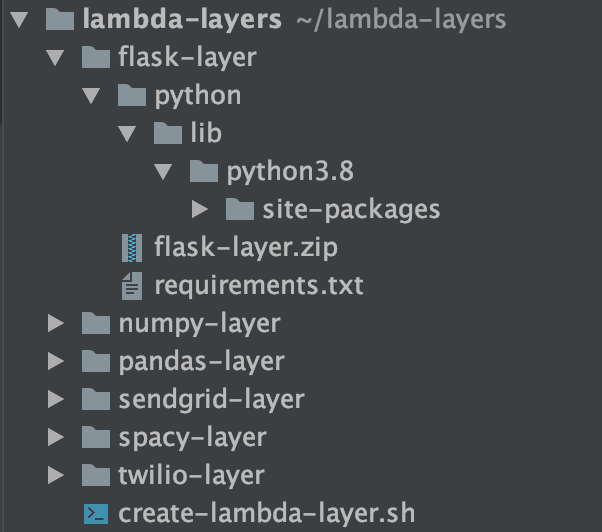 The script accepts parameters for Python versions (you can provide multiple!), a name and description for your layer. From those parameters the script will generate the file structure, run the docker command for each Python version, create the zip archive, and then update the layer to AWS.

We can test this by installing the Twilio helper library. In the Terminal, create a directory where you're going to store your Lambda layers.

Create a file inside that directory, create-lambda-layer.sh, and paste the code above into the file.

Each layer needs to have its own directory, run the following code in the Terminal to create a directory twilio-layer.

The last bit of setup is to create the requirements.txt file, which should include:

Now we can call our bash script to finish creating and deploying our layer (again, make sure you have Docker running before executing this code!)

And your layer is deployed to AWS!

If you want to create your layer for multiple different Python versions all you have to do is specify additional -v parameters with those versions. The example below creates a layer for the Python 3.6, 3.7 and 3.8 runtimes.

In this post I showed you how to deploy a Lambda Layer through the commandline using Docker. The bash script provided isn't fully featured, but in its current form provides a convenient way deploy your Lambda layers. Layers are a neat tool that can help you add functionality to your Lambdas. Docker simplifies creating layers so you can manage your own library of layers that you can share with your friends and coworkers!

Once suspended, matthewvielkind will not be able to comment or publish posts until their suspension is removed.

Once unsuspended, matthewvielkind will be able to comment and publish posts again.

Once unpublished, all posts by matthewvielkind will become hidden and only accessible to themselves.

If matthewvielkind is not suspended, they can still re-publish their posts from their dashboard.

Once unpublished, this post will become invisible to the public and only accessible to Matthew Vielkind.

Thanks for keeping DEV Community 👩‍💻👨‍💻 safe. Here is what you can do to flag matthewvielkind:

Unflagging matthewvielkind will restore default visibility to their posts.