Earlier today, fellow Umbraco package dev Nathan Woulfe blogged about his struggles with getting versioned deployments working in Azure DevOps and in the spirit of sharing, I thought I'd outline my approach to solving the same problem.

As package devs, you really want to be spending as little time preparing deployments as possible as the quicker it is to deploy, the less of a problem it is when you need push changes out quickly.

The best way to achieve this is through automation, using tools and scripts to generate builds and deploy them for you.

With our package Vendr, our approach has developed over the years, but today we have a pretty nice setup which means for us, releasing nightly/unstable builds is as simple as committing changes to our code repository (we regularly share this with developers so they can quickly review code fixes) and pushing out a release is a matter of merging into our main branch and tagging that merge with a version number.

The first step to getting things automated is setting up a build script. A number one requirement for me that I've grown to learn is important over the years is having the ability to run a build script locally.

Previously we have used MSBuild for this, however as this is XML based, it's really quite cumbersome and takes a lot of trial and error to get things working. More recently we've started to use an excellent tool called NUKE Build which is a C# based build automation tool that lets use write our build scripts in C#, benefiting from strongly typed variables and the ability to use any existing C# library for custom build requirements.

I won't go into a ton of detail on how to use it, but essentially you install the global build tool via the command

And then running the command nuke :setup to initialize your project. This will run you through a wizard to setup the build project in your solution.

In Visual Studio you then have a new _build project added to your solution, and a Build.cs file in this project that is your build script. 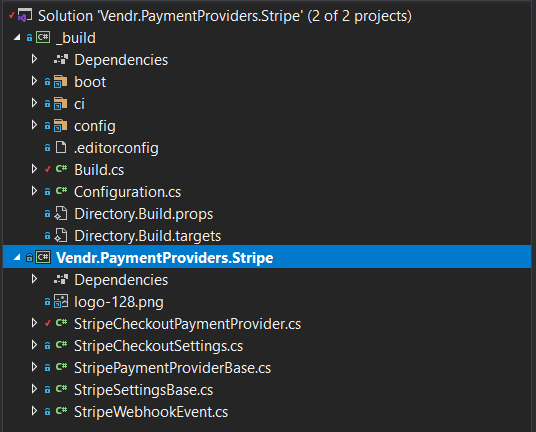 NUKE will have already stubbed out a build script for you, but you can use the following as a basic script.

There is a lot going on here, but ultimately it's defining a number of "Targets", each performing an individual task in the build process. The tasks we have defined are:

NB this script assumes you are using the new .NET SDK style projects and your solution is committed to a git repository

With this build script defined, in your project root directory, you can then run the command build pack to trigger your build process starting with the Pack target.

Once the build script runs, you should then find your generated NuGet packages in your artifacts directory.

When automating build scripts like this, one of the biggest pains, and the pain Nathan had in his build setup, is managing the version number of your artifacts being generated. For use, we find the use of a tool called GitVersion a god send.

GitVersion is a tool that looks into your git repository, and uses a number of conventions to determine the next version number to generate. It's a pretty powerful tool, and quite a lot to go through in one blog post so I'll just suggest you head over to the GitVersion website to find out about more of the intricacies.

For our purposes though, we can just know that whenever we commit to the dev branch, it will generate an alpha build with the build number appended on the end, and when pushing a git tag such as v1.2.0 on the main branch, it will create a full release build. Also, the very presence of the v1.2.0 tag, will also increment the dev branch versions from that point on, so it always keeps our version numbers in the correct build order.

A nice thing about NUKE build is that GitVersion is a first class citizen and so requires minimal setup to get working.

In the build script above, you can see the term "GitVersion" used in a few locations. At the very top, we define a GitVersion variable, which basically tells NUKE we want to use GitVersion and then in both the Compile and Pack steps we access multiple defined properties to set things like the compiled assembly versions (GitVersion.AssemblySemVer) and the version of the generated NuGet packages (GitVersion.NuGetVersionV2).

With the above in place, we have the ability to build our packages locally which is really useful for testing or needing to create one off builds for someone, however we don't want to have to be running the builds manually every time, so this is where Azure DevOps comes into play.

Azure DevOps is a lot of things (we actually use it to host our private git repos too) but the thing we are most interested in for automated deployments is Azure Pipelines. Azure Pipelines is basically a configurable build server that can monitor our git repository and trigger builds to occur automatically when certain criteria is met.

Azure Pipelines can be configured via the Azure portal, but it's often easier to use an azure-pipelines.yml file in the root of your project.

In Vendr, for our payment providers, we have something like this.

Again, there is a fare bit to dig into here, but ultimately this script is first of all configuring which changes in the git repository should trigger the build, then setting and importing some variables and then moving on to the build process.

For the build step, we trigger our build script we previously defined, and then publish the generated artifacts as Azure Pipeline artifacts (this just makes them available to other build steps)

I've tried to summaries a lot of information here so there is probably a lot you might need to look into further, but I hope I give just enough to see how things are working together and the benefits of doing things in this way.

Create your own Kubernetes Cluster in 15 Minutes on AWS EC2

Coding My Way Into The Magic Kingdom

Once suspended, mattbrailsford will not be able to comment or publish posts until their suspension is removed.

Once unsuspended, mattbrailsford will be able to comment and publish posts again.

Once unpublished, all posts by mattbrailsford will become hidden and only accessible to themselves.

If mattbrailsford is not suspended, they can still re-publish their posts from their dashboard.

Once unpublished, this post will become invisible to the public and only accessible to Matt Brailsford.

Thanks for keeping DEV Community 👩‍💻👨‍💻 safe. Here is what you can do to flag mattbrailsford:

Unflagging mattbrailsford will restore default visibility to their posts.