The last few years have been a great development for mobile video. Not only for Instagram stories and Youtube vlogs but also for capturing sports or funny things in slow motion. Because I find slow-motion videos entertaining, I wanted to try one myself too and share my experience. I decided to combine this with one of my favorite hobbies, Legos. Long story short, if you want to see how I totally smash the building complex in the next photo, go to see this video. The music of the video is from Bensound 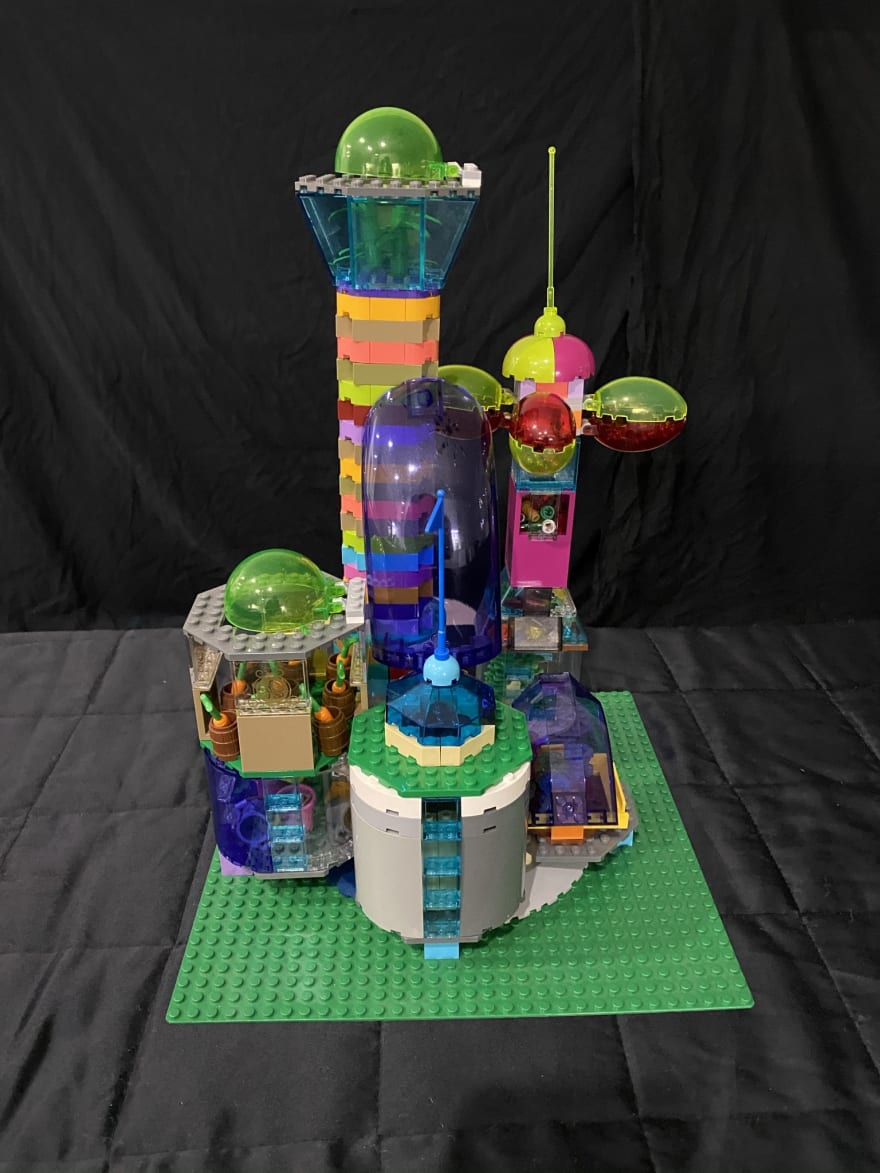 This complex is an imaginary build of a terraforming facility on Mars and withholds thousands of plants. I didn't use a super long time for building it just to destroy it. The complex itself and its total destroyal were inspired by Australian Lego Masters, season 1, episode 2. The assignment was to build a space-themed complex just to be destroyed by either dynamite, baseball bat, falling from high, or smashing towards the wall with high speed on rails. The closest I found doable inside my house was to smash it with something. I don't own a baseball bat and had to figure out something else. My weapon of choice is in the following pic. 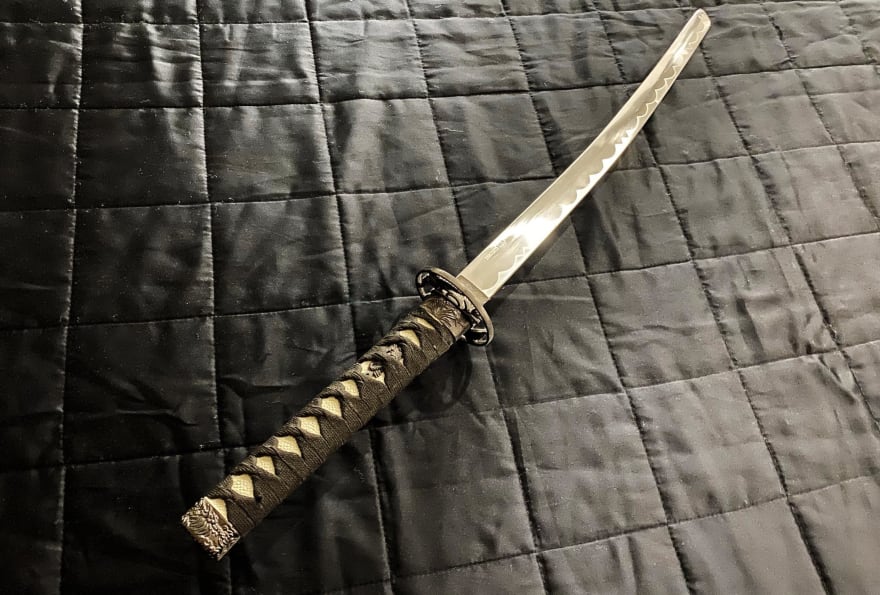 It's a decorative wakizashi, the middle one from the decorative set having katana, wakizashi, and tanto. Katana was a little bit too long, and I was afraid that I would hit the photographer. Even though it's not very sharp because it's decorative, I still decided to use the dull edge to do the actual hit so my Legos would get the least damage. In the following image, you can see my setup. As a background, I have two black queen-sized bedsheets. On the table, I laid a black bed cover. That stool is there for me to stand on. I wanted to do the hit myself, so I asked my husband to operate the camera. I wore some black clothes too so only my hands are clearly visible in the video. 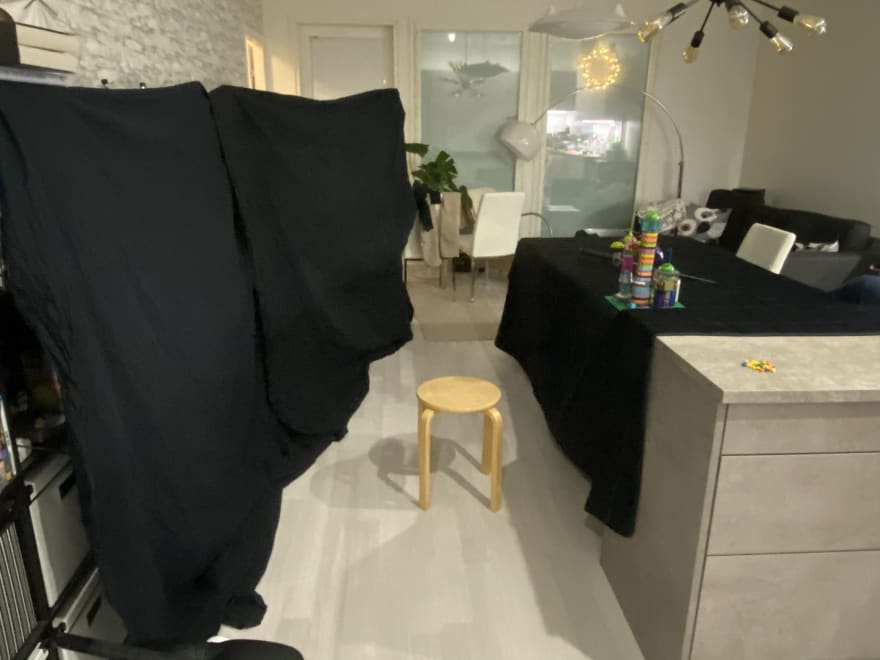 The best mobile phone cameras can do either 720p or 1080p with 240fps, which roughly means you can get 8 x slower than normal video speed. You can get even slower if you are willing to cut down the resolution. Some apps also use trick techniques to achieve an even bigger slow factor. My video is shot 240fps on 720p. First, we did a dry-run to see what is visible in the frame and how the lighting works. These poor bastards in the following image got to be the guinea pigs before destroying the real building. I just tossed them in the air and, we checked out if they are clearly visible in the video. We also checked if they look cool enough on the 8x slowness to see if it's worth doing the whole thing at all. After all, there was a lot of collecting small Lego pieces from the floor at stake. I don't want to do that for anything. Luckily dry-runs supported going on with the real thing. 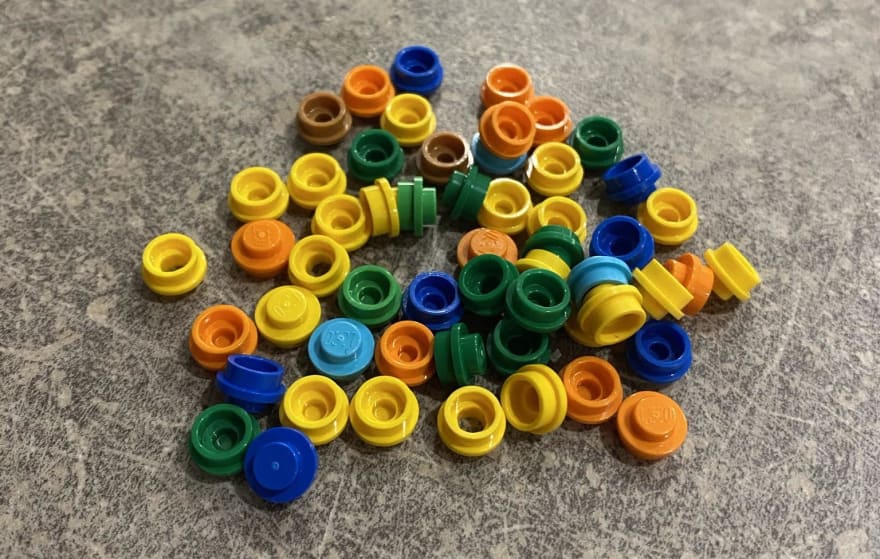 The actual photo shoot went pretty well. I had designed the building to have a lot of bits and pieces hidden in its towers and domes, just to look nice when bursting around after the hit. The break happened quite evenly and almost all the tiny things got out. Even though I tried to build the towers quite flimsy, they did not mostly fall apart. That kind of turned out ok because I love that final tower rolling to the floor at the end of the video. Here you can see some details of what I had hidden into one of the towers, including some shiny gems! 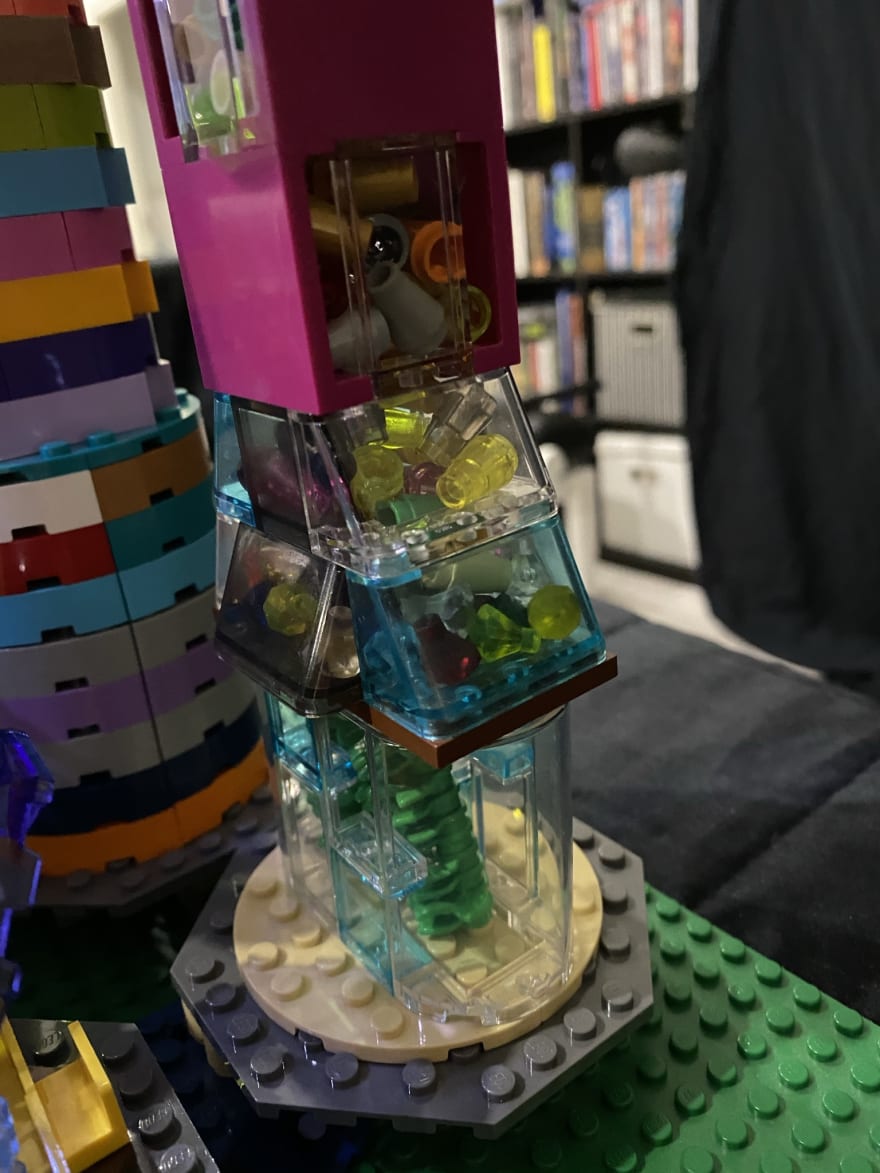 For the post-processing of the video, I first tried Vegas Pro 14. The app crashed every once in a while, so I had to be saving the whole thing pretty often. At some point, I lost my nerves on the crashing and decided to use Adobe Premier. Unfortunately, I did not find all the same functionality for slow-motion video editing from that. The best thing in Vegas was the speed envelope. You could add it to the whole clip and then add additional stops on the curve. You could then move those stops to achieve different speed at different parts of the clip. I googled a bit and ended up with the impression that Adobe After Effects has similar functionality. I tried that, but it was not so intuitive to use and, I did not manage to get the same outcome, so I came back to Vegas after all. This is a partly screenshot of the Vegas timeline. You can see the green line with dots over the video that is the varying speed curve, the higher the faster.

For the sound part, I removed the original sound. I replaced it with a free (with attribution) epic track I found online. There was still one thing to fix. In one part, a tiny piece of white wall on top of the bedsheet was visible. Luckily I knew that it was possible to add solid color boxes wherever you need in the clip. They can be used e.g. to introduce a speaker, to have a box behind the text, and some graphics when someone new is speaking in the video. I used the same functionality for adding a tiny box on top of the video and matched its color with the background. That's the topmost track in the timeline. There, fixed! That was my experience with the slow-motion photoshoot and editing it. I sure had fun, even though I had to collect all the pieces everywhere from the house afterward. It would be nice to hear your experiences and tips in the comment section. Where do you get ideas and resources (music etc.) for this kind of entertainment?

🤓 What's on your GitHub Profile README

Take command of your go programs with Cobra 🐍