This post will show you how to take an OpenAPI Spec file and automatically generate a Postman Collection of API tests with minimal configuration. This is especially helpful for a CI/CD pipeline that runs automated API tests after a deployment.

Since this takes an OpenAPI spec as input it doesn't matter if you're automatically generating the OpenAPI spec, manually writing yaml (🤢) or exporting it from something that's already deployed.

For some minor housekeeping, I bumped the CDK dependencies. The old version of this project's @aws-cdk/aws-lambda-nodejs dependency still used parcel to bundle its lambdas. Parcel was PAINFULLY slow, so I'm glad the CDK team switched to esbuild. It is extremely fast, assuming you have it installed in your project. If you don't have it installed it uses a docker image, which somewhat negates the speed benefits.

The rest of the dependencies are straight from postman:

Using this project, a CI pipeline flow for API testing would look like:

🚀 Note: None of this has us editing json/yaml by hand! Everything is generated via code! 🚀

src/newman/newman.ts is the main file.

This file uses a list of tests that it iterates through to generate the customized postman collection. It uses the test's path and method to find the corresponding test from the OpenAPI-generated file. If that doesn't exist (for example if you rename an endpoint) the generator will return an error:

This would break a PR's CI prior to getting merged anywhere.

Postman tests are a little unnerving in that they just execute a list of strings as javascript for their test. The benefit of this is that all we need to do is have a bunch of string generators to produce the tests we want to run.

Each endpoint test we run is defined by the ApiTestConfig interface:

This names the test, uses the /example/:hello/basic POST endpoint defined here, makes sure it returns a 200 and the message ultimately matches what the inputs are. This corresponds to the test output of:

The test interface's status and response values get turned into the string arrays used by newman/postman.. The src/newman/checks.ts file has the generators for those tests, and it's easy to see how these could be extended. For example you could check specific items in a json response using dot notation since they are simply evaluated directly. 🤦‍♂️

Since the previous project automatically generated the OpenAPI spec, we just need to add two more commands to test the deployed API:

😍 Notice how much faster npm run test is thanks to esbuild? 😍

But what if we don't want to deploy the API first? No problem! Instead of npm run newman:test use npm run newman:pr. This will make sure the extended Postman Collection is in sync with the generated OpenAPI spec. This only protects against basic endpoint changes such as renames. I talk about some strategies at the bottom of this article for how to potentially make this more robust.

If the full API test is run, the output will look like this: 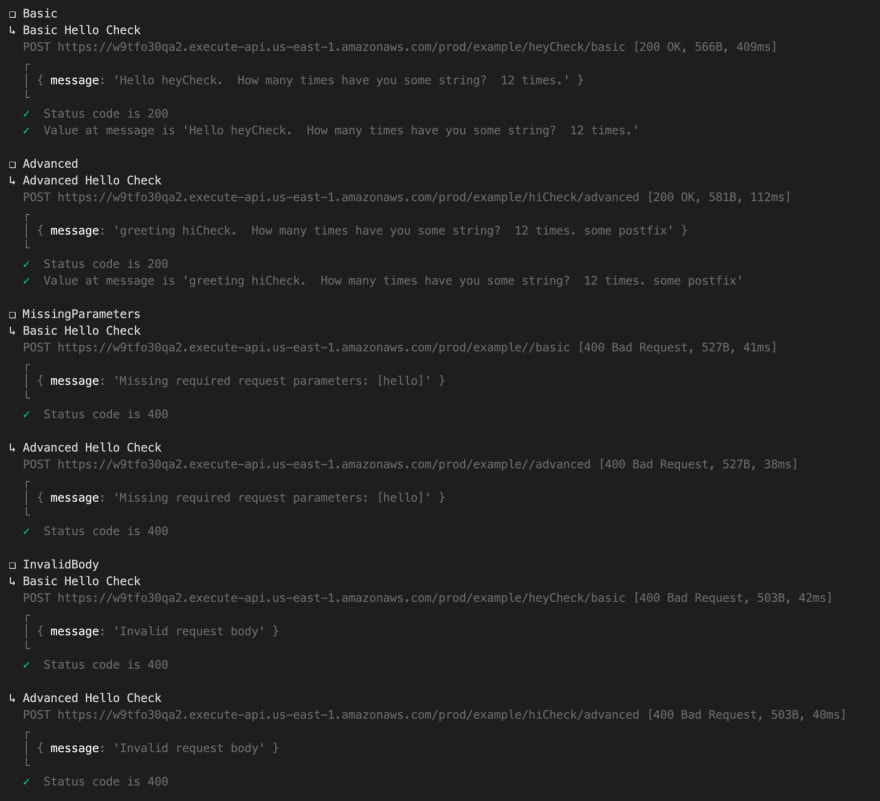 The newman library also has the option of exporting the new collection with all the tests.

You can take this file and import it into actual Postman and run the tests / hit the APIs in there: 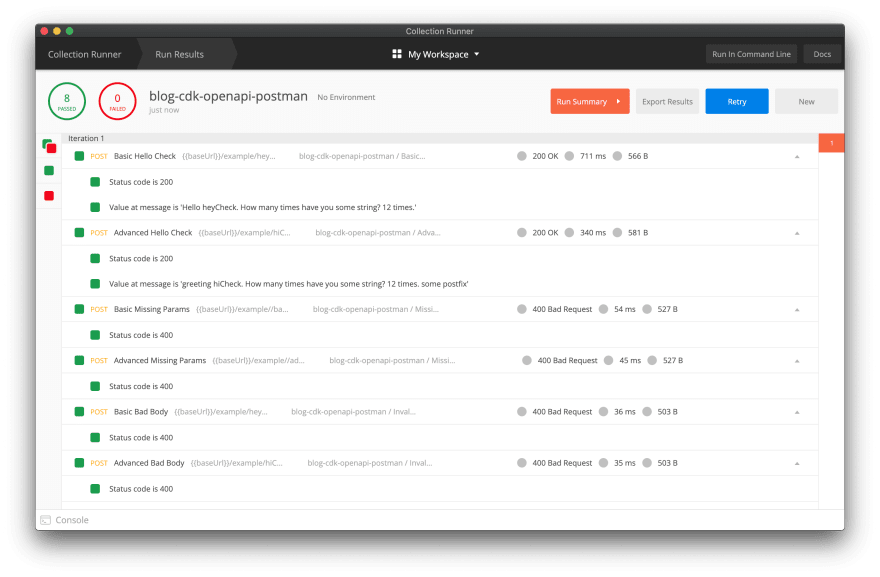 Depending on your level of customization... this file could contain some secrets so it's .gitignore-ed

This doesn't fully automate our API testing (yet), but it does ensure that our API tests are in sync with the OpenAPI Spec file AND we don't have to touch a line of yaml... which is at least an improvement.

There's a lot that could be done to extend this. For example:

What other ways could this be extended?