I graduated from my SWE degree around 6 years ago (almost to the date). The uni I went to wasn’t one of those fancy big names you’d recognise but a rather small one in Wales, UK. It had a fairly decent curriculum and gave me the necessary skills to get a job in London. Lately though, I’ve started questioning what it means for me personally to work as a software engineer.

The loop
For the past 6 years I’ve been working my way through various companies. In each one I’ve felt like something just isn’t enough. I would reach a point where I’m not learning anymore given the constraints of the company I’m in, look for a new job with newer tech and a bigger salary, rinse and repeat. I feel I’ve been stuck in this loop for a while now. I’ve reached a point where I have a good understanding of some of the most complex types of systems. I’ve worked with monoliths, microservices, various different databases and message brokers and have reached a salary which for a non-lead/management role would be somewhere in the top percentiles for the city I live in. 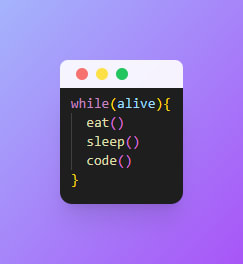 Perhaps, I’ve been searching for the feeling of meaning through the work I do. There have been times I’ve felt this but as time goes on it feels like I’ve been lying to myself in those moments. ‘If I work for a company that gives credit to small businesses, this directly benefits the economy and has a net positive impact of the wider society I live in’ is what I would tell myself and it would give me this sense of pleasure for a while. This period always ends though and I feel meaningless over and over again. Why is that?

The moments that I’ve felt amazing about what I do were always the ones where I would try to create something new - hook up to an interesting new API, a proof of concept for an idea that sounds fun to me or (more recently) making music. It seems to me that the common denominator between these was always the creative aspect of building something which doesn’t exist. Literally something which has not existed that I’ve been able to create. How amazing is that? This is what I love about software engineering - you create something from nothing! One might argue that that’s exactly what you get even with a regular job, but at the end of the day, unless you’re in a really early stage startup, there will be someone giving you a list of requirements that you just need to implement. Of course there’s nothing wrong with that but for whatever reason, I no longer find it exciting… At one point I was obsessed with the idea of getting into one of the FAANG companies. That desire seems to have faded as well.

However, I’ve always been drawn to that act of creation which feels like art. I think all humans are intrinsically creative creatures. As Yuval Harari describes in his book Sapiens, imagination is one of the key drivers of humanity’s progress. We can literally conjure an image of what tomorrow or the day after will look like and make this a reality. This is how creativity and art work! Many people talk about potential joblessness as more things in the world are automated by robots and AI, but I think humans are creative enough to always think of ways to spend their time and make a living out of that...

So now, after I’ve realized that I dread this endless while loop of the 9 to 6 grind every day working for someone, I finally have the clarity to say I want to pursue something that is both creative and can generate revenue. I don’t yet have the confidence to build a game-changing product like Amazon or Tesla like all the Silicon Valley dudes aim for. I think there’s an alternative way though - a portfolio of smaller indie products that I’d be happy to work on seems like a good alternative right now. I’m sure it’s not easy to achieve that and I won’t be quitting my job soon. For the time being I plan to try build side projects and grow them. Have you ever had similar thoughts and experience? Or perhaps you’ve already gone through this type of transition? I’d be happy to connect on Twitter here and chat about that!

The roadmap to technical writing

Once suspended, martinzokov will not be able to comment or publish posts until their suspension is removed.

Once unsuspended, martinzokov will be able to comment and publish posts again.

Once unpublished, all posts by martinzokov will become hidden and only accessible to themselves.

If martinzokov is not suspended, they can still re-publish their posts from their dashboard.

Once unpublished, this post will become invisible to the public and only accessible to Martin Zokov.

Thanks for keeping DEV Community safe. Here is what you can do to flag martinzokov:

Unflagging martinzokov will restore default visibility to their posts.