TLDR: We were having a bad time with Blockchain smartcontract's development, and fortunately we had found solutions to save our asses. We'd like to share it with you, so maybe it could be useful to you also.

It's a huge public database (chain of data blocks), which is being shared across many computers. Everyone can query data inside it, or add a new record by sending transactions. Everything is stored historically, so you can trace the changes easily.
With ethereum chains, it's even funnier with SmartContract - a program that runs on chains. Developers can write and compile a program, and upload it into the chain. Then everyone can run it to read its data, update its data with transactions, or even use it to run another program.

Tips: You can use this tool Smartcontract UI to interact with smartcontracts easily.

We were working on many projects based on blockchains, mainly in decentralized finance. Many of them are programs (written with Solidity) that involve managing users' account balance, allowing users to trade their assets, or to stake their assets to the liquidity pools and gain interests.

Problems with our development/deployment

However, we were usually facing a big problem: Smartcontracts in ethereum chains are immutable. It means once you deployed it on the chain, there is no way to change it. It works just like a contract we have in real life: you surely won't change the contract's contents once you signed it, if you want to, you'd need to have another contract. Same in ethereum chains, if we make changes in the contract code, we'd need to deploy it again to a new smartcontract.

And since a smartcontract has its data, when we deployed to a new smartcontract, we'd need to migrate all data from the old contract to the new one, while keeping support on both contracts until all users moved to the new contract.

Another problem we were having is the contract's deployment. After finishing the code and passing all tests on the local environment, we rely on someone to deploy it to the test chains so we can test its communication with other contracts. And since the contract's address will be changed each deployment, it's a really big pain for us to update all the addresses on each deployment.

SmartContract's development is fun, but its deployment was a pain for us for a long time.

We've decided to improve our deployment process. Thanks to OpenZeppelin, we're now able to upgrade our contracts smoothly.
When we deploy the contract on the first time, OpenZeppelin will create a Proxy Contract, points it to our actual contract, and finally, it deploys all contracts. Later, every time we make changes to the contract's code, OpenZeppelin will deploy it, and points the Proxy Contract to the newly deployed contract, keeping the old contract's state. Now we don't have to worry about the migration between contract's deployments. Our users and devs always connect with the Proxy Contract address, which points to the latest deployed contract.
It was a good change, that helped us during the release process. However, we were still having other problems with the deployment: We'd still need someone to build the contracts and deploy them to the chains. It requires access to our deployer's wallet, and we cannot give the wallet access to everyone in the team.

After many tries, we finally integrate our build & deployment process with Github workflows. We also added some tweaks (like caching dependencies for faster build in future, configuring Truffle environment correctly, having wallet's private key in Github's secret,..)
Our deployment is automatic now! Every time we merge features into a development branch, a workflow will be triggered to build the contracts and upload them into the test blockchain. And when they are ready for production, we just need to tag the version. Github will deploy the contracts into the production blockchain.
We also release the contract's built artifact to Github release page every time we release the contracts to production, along with the prerelease of the contract's ABI on each push to the development branches. In this way, our users and devs can always update the contract's ABI quickly and easily. 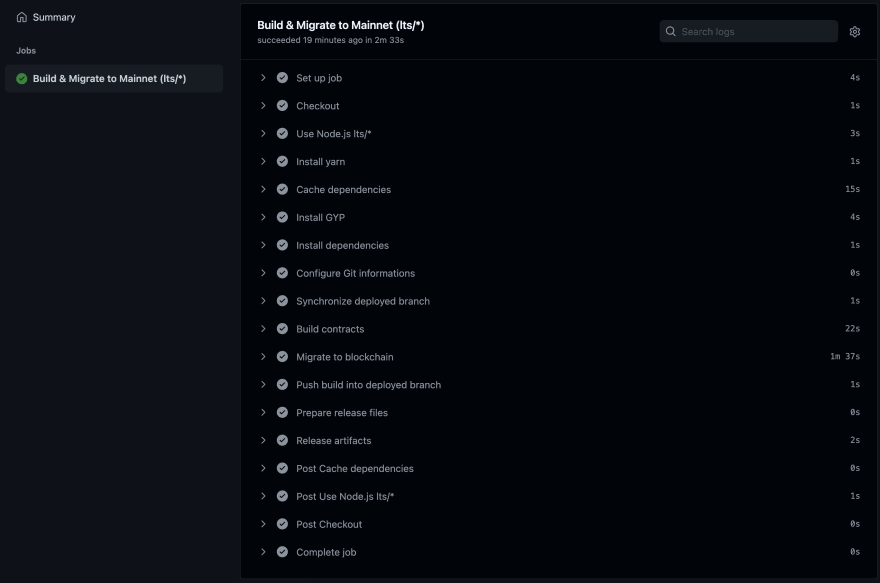 Everything seems OK, but actually, we're still missing a piece: We use actions/cache@v2 to cache the Truffle's build. So in the next deployment, we can continue the migration without doing it from the beginning.
However, the cache will be removed after some inactivity time, and when it's removed, or if there is some problem in the cache (cause of a wrongly configured deployment), our migration process will be restarted from the beginning. Therefore, all the proxy contracts will be changed. We will need to notice our users and devs, and migrate all contract's state.
Again, we had to try other approaches, and finally, we found a solution: Saving the Truffle's build on a deployed branch. So for each deployment, instead of taking the previous build from the cache, we will pull it from the deployed branch, and continue with it. It has some more advantages:

Use GitHub Actions and Workflows to build and deploy upgradable smartcontracts into the ethereum blockchains. After its deployment, the contract's ABI will be released, and the artifacts will be saved into a deployed branch. 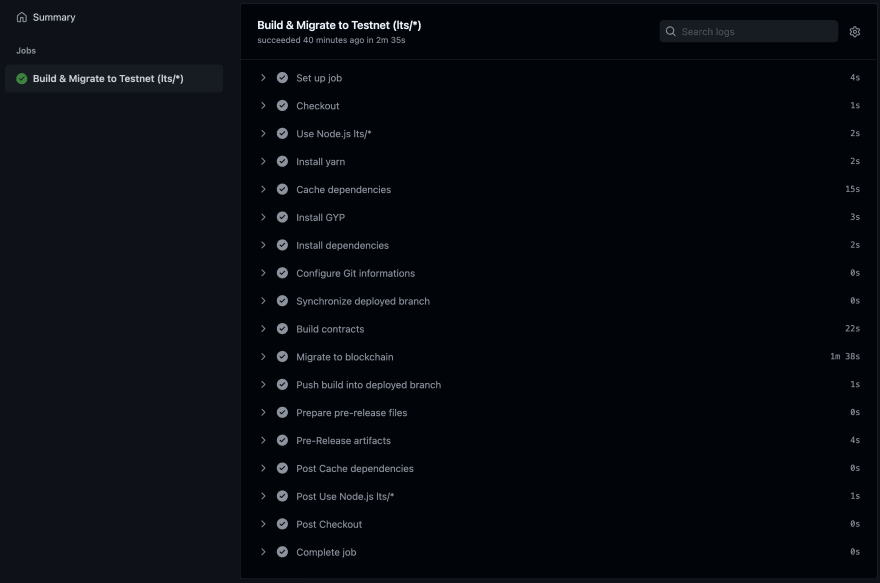 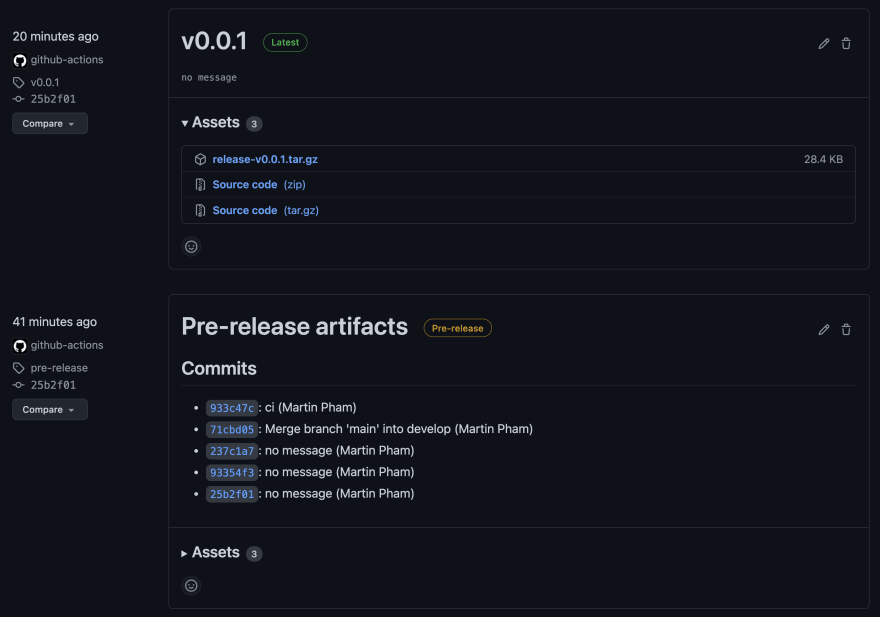 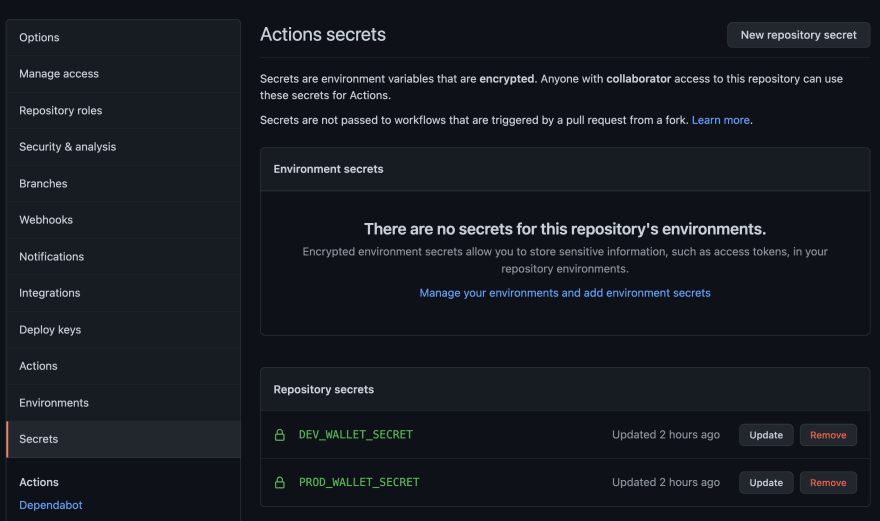 Keep your research reproducible with conda-pack and GitHub Actions

Why You Should Learn Functional Programming