When I was learning JavaScript and first encountered the concept of callback functions, I was still trying to wrap my head around the whole "asynchronous" idea.

In fact, I've seen a lot of tutorials and courses that tell you that a callback function is a type of asynchronous function.

Well, this is actually not true.

It turns out that callbacks aren't necessarily asynchronous at all.

What's the definition of a callback function?

You're in the presence of a callback when you can see this situation in your code:

The shape of the code looks like this (which is the syntax of a function call with one argument):

If the situation matches the those three conditions, then Bravo is a callback function. It's being passed into a function call as an argument with the expectation that it will get called. That's a callback.

Let's take a look at an event handler example and we'll confirm that the above points are there.

If you're waiting for a mouse click on your page, you might use the addEventListener method. If you're using a framework like React, then the onClick prop works in almost the same way.

In this example, do we have...

So we can conclude that yes, it's a callback function.

To clarify the 3rd point of the definition, it's helpful to ask: who is calling the callback function?

So, we can conclude that addEventListener is the one who will be responsible for calling doSomethingAfterClick. Because even if we don't see the explicit function call, we know that addEventListener can take our callback and can do whatever it wants with it, which includes making sure that it gets called when that click event happens.

After talking about the definition of a callback function, we can see that callbacks don't have anything to do with the async concept at all. They're just regular functions, and they don't know or care whether they're going to be called asynchronously or not.

How to tell if it's an asynchronous callback?

Instead of going deep under the hood to find a technical definition of what asynchronous code means, I think it would be more helpful to stay close to the surface and ask: what can we actually observe that's different between sync and async callbacks?

To figure it out, we need to know what happens and in what order. Let's write a timeline based on the above scenario with functions Alpha and Bravo.

The important thing to notice is the order of #2 and #3. First, Alpha returns. Then, Bravo is called at some later time.

This tells us that it's an asynchronous function. The reason is that the only way for Alpha to return before Bravo is if it puts Bravo into the asynchronous queue, causing it to be called at a later point in time.

Here's how the relationship between the callback and the parent function looks on the timeline: 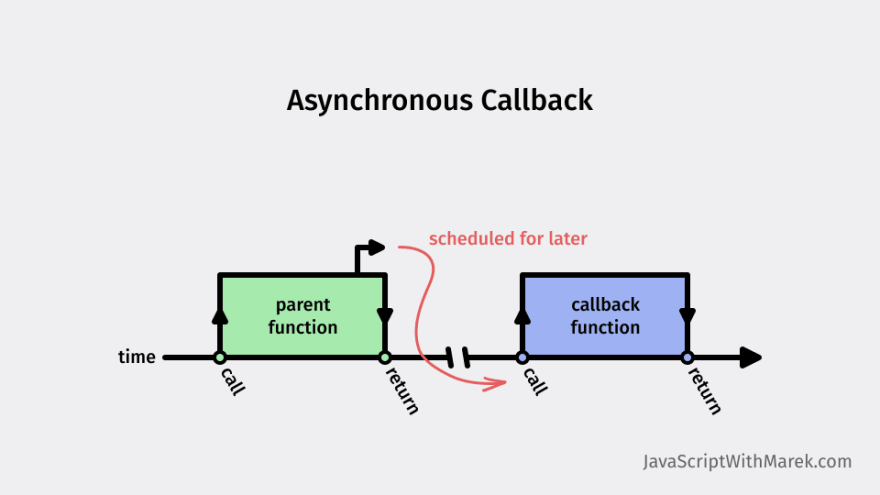 On the other hand, if we had a synchronous situation, then it would mean that Alpha is calling Bravo directly and therefore needs to wait until Bravo returns before it can return too.

How to tell that it's a synchronous callback?

How would that timeline look if we had a synchronous situation?

So the relationship between the parent function Alpha and the callback function Bravo now looks like this: 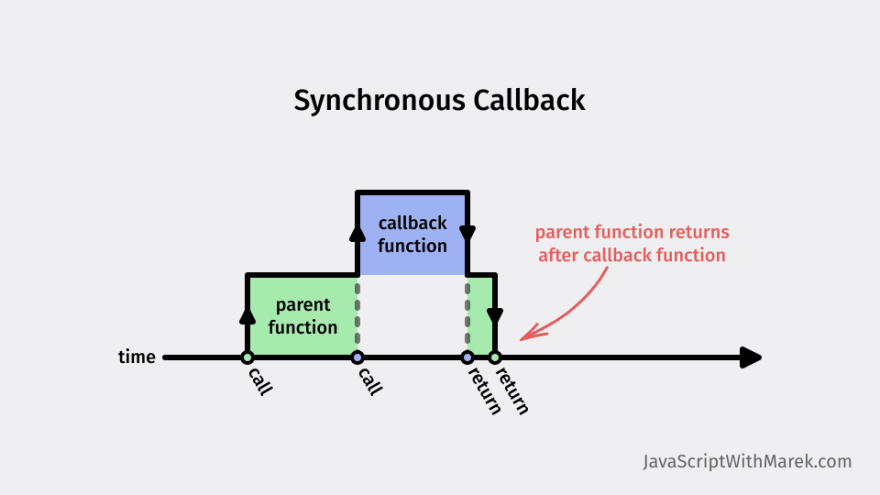 Here are some great examples of synchronous callbacks:

If we were to draw these examples, we'd actually draw the blue box being called multiple times, and those calls would all happen before the parent function returns.

You can also look at the code of a function to figure out if it uses sync or async callbacks. If you can see the callback being called directly, with the function call syntax (like callback()) then you know it's synchronous.

Here's a function that uses a callback synchronously, and we can know this with certainty because we can see that the callback gets called directly:

This matches what we see on the diagram, because the call to callback(output) must be completed before the JavaScript engine can reach the end of the parent function and return from it.

What's the relevant part of this story? Let's recap the main points.

My next articles will cover more topics on the fundamentals of JavaScript execution, so click Follow to get notified about them.

Building A Career In Tech As A Newbie

Originally posted on my blog Introduction The tech industry is ever evolving, what this m...

Algo Challenge-- Capitalize each word in a string

How to Host A Website On Google Drive for Free

DEV is visited by over 2 million software developers per month. You are welcome to publish here or simply read great content.