I think it's not an exaggeration to say that most of the content on Flutter is about state management. Being a reactive framework for the client side, Flutter has integrated the concept of state since its birth. But if you do a complex project, setState won't solve your problems, that's why there are state managers.

Flutter's most popular state management tool is Provider. I don't say it, science says it:

Followed by packages like Bloc, which even depends on the same Provider, that's how useful it is.

I'm not going to talk much about Provider because I already made a clarification that I consider important in my article on StateNotifier, it's a must read since it clarifies quite what Provider is (I'm sure you already know what it is) and it is one of the packages that Riverpod incorporates.

But... what is Riverpod and why do I like it so much?

In the StateNotifier article I explained that Provider was a tool that allows us to easily use InheritedWidget, which is the class in Flutter that gives access to its properties to its children in the widget tree.

Provider itself has a lot of problems because of this relationship with InheritedWidget.

First, doesn't allow us to create two Providers of the same type. If we have a class from which we want to create two separate objects to handle similar logic in different modules of the app, it's impossible for us because an InheritedWidget is found in the tree looking for a specific data type -or class-. This also causes Providers not to be found and leaves us runtime errors that could be avoided in compilation. Strike one.

Then combining Providers can be cumbersome, more complex than it should, and throw unexpected errors from the same unusual InheritedWidget manipulation. The common way to make a Provider aware of changes in another to react in its logic is by using a ProxyProvider orChangeNotifierProxyProvider and yet these aren't the best alternatives in synchronization or syntax (it gets very nested) , they are a dependency injection and not exactly a listener for events. Strike two.

Finally, depending on InheritedWidget, it depends on Flutter, which isn't the best if you like to encapsulate your business logic in a separate package and maintain a separation of concerns with your logic independent of the SDK of the user interface. Strike three ... well, not necessarily, but do you see that there are many opportunities for improvement?

All these problems make the creator of Provider -I stand up and applaud- Rémi Rousselet, had the initiative to reengineer InheritedWidget from scratch, thus creating Riverpod.

Riverpod is currently in a stable version for production use, but as such it's an experimental project that isn't an official replacement for Provider, yet.

In this link you can see the status of Riverpod according to Rémi.

In simple words, Riverpod doesn't depend on Flutter so it doesn't depend on InheritedWidget, it allows us to combine Providers to listen to and react to its changes and it guarantees us reliable code from the compilation stage.

Yes, it solves Provider's problems, and very well if you ask me.

Let's see it in action and its equivalents with respect to Provider.

Which package do I use

If you do a search in pub.dev, you will find 3 versions of Riverpod, let me explain what each one does.

And if it wasn't clear, this image is in the documentation, to make it more graphic:

Migrating from Provider to Riverpod

Initially when we wanted to insert a Provider in the widget tree, we did something like this ...

Here we could have a list of our Providers and it depended on the MultiProvider, a single Provider or ChangeNotifierProvider. This way gave us a scopethat determined where in our widget tree we would be able to use our logic holder.

In Riverpod, our Providers can be seen as global variables that we can also consume in a global scope called ProviderScope and this scope can be overwritten as necessary in the tree.

Once our ProviderScope is declared, we can use any Provider below it. Now let's see how we make a Provider.

In the case of Provider, we create a class that inherits from ChangeNotifier, StateNotifier or a repository or service class of its own. Riverpod comes with StateNotifier by default, so it's better to implement this alternative, same way there are more types of Providers than we will talk about in a moment.

We can use this NamesNotifier both in Provider and Riverpod because the logic components are not affected by the package, which already takes care of incorporating this component into the widget tree for use.

In Provider we need to include the packages state_notifier and flutter_state_notifier, in Riverpod does not need them since flutter_riverpod contains the ConsumerWidget (equivalent to the Consumer widget in Provider but used more similar to StatelessWidget).

💡 I quickly clarify that the core of the packages is in riverpod and state_notifier, and the other packages that I mentioned that are called the same with the difference of the flutter prefix contain the widgets to communicate the logic of these packages with the interface.

To create a StateNotifierProvider on Riverpod, use the following way...

Once declared, no matter what file it's in, the Provider is in the ProviderScope and is available wherever it is needed via ProviderReference.

I want you to analyze the syntax a bit.

See why it was good to separate him from Flutter? We no longer need BuildContext.

Use of Providers in the graphical interface

In Provider we use the BuildContext of the build() method of any widget to access our Provider since it is anInheritedWidget.

Yes, there's a ConsumerWidget that is very similar to aStatelessWidget, but adds a ScopedReader as a parameter to the build() method. This new parameter allows us to access any Provider that we create and be listening (or observing) the changes it may have.

Likewise, we can use a StatelessWidget in conjunction with the Consumer widget that works in the same way as in Provider, only that it gives us our ScopedReader instead of the type that we define, since there can be multiple Providers with the same type and that no longer guarantees that we will get the value we want when sending the type.

💡 In this section of What Marcos Recommends...

I use ConsumerWidget since I don't like to nest more widgets with Consumer, the code seems much more readable to me and it is easier to find where your Providers are used having classified your widgets in StatelessWidget, StatefulWidget and ConsumerWidget.

One of the solutions that Riverpod brings to Provider problems is easier communication between Providers. We achieve this thanks to the ProviderReference.

The creation of a Provider gives us by default its possible combination with another that is in the reference. This is how we can inject dependencies of Providers and establish behaviors based on those changes.

Suppose we have a Provider with authentication functionality, which we call authProvider, we use its login() method that returns an access token. Having the token, we can update the state of our tokenProvider, which saves the value for us to use in other queries.

What? What's that StateProvider and FutureProvider thing? Glad you ask...

Everything is a Provider

As you can see, there are many types of Providers, and it's a word that's going to come up everywhere if you work with Riverpod.

I'm going to present you the most common and used types of Providers so far.

How to structure Providers

Riverpod has the peculiarity that, as we saw previously, it covers many use cases with different types of Providers, from app state to ephemeral state.

The problem is that there is no guide on how to structure Providers, so I always recommend separating your logic in a good way.

I summarize it in my personal rules:

With the rules that I mentioned before, we have a folder structure like this... 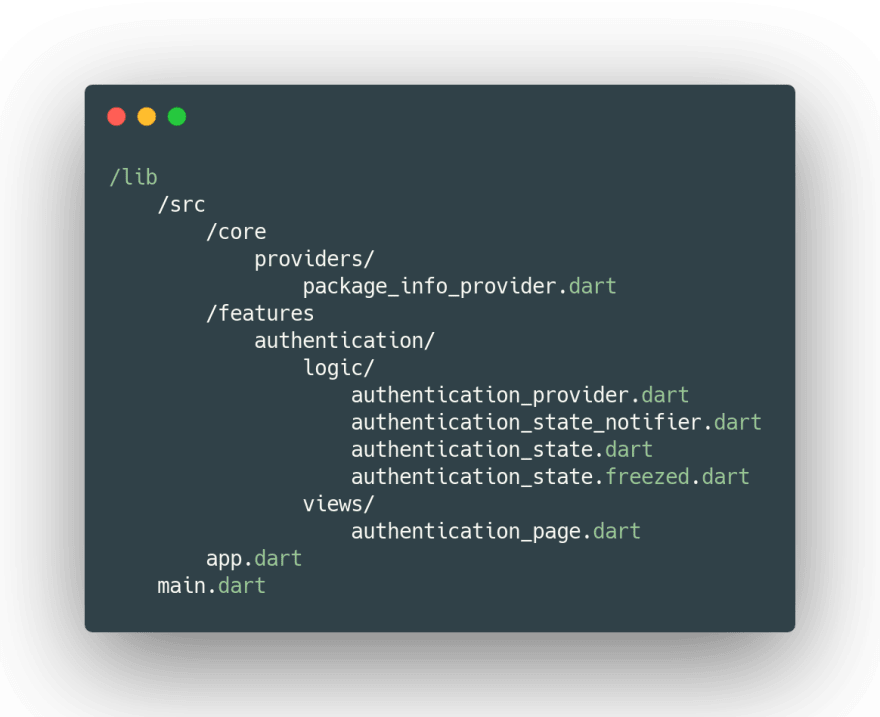 Some things to consider

I was thinking for a long time if there are any downsides or something to say as a warning about Riverpod. Being honest and objective, I don't find many things and the ones I do find aren't critical.

Riverpod is already in a stable phase, as you can see. They can implement it in your projects from now on and I dare to say that it may be a better option than Provider. It's a package that can take your time to master, but once you do, it becomes a very capable tool.

I also clarify that it isn't a replacement for Provider yet, since Provider still solves many needs. For me, Riverpod is going to be the new standard once more developers are mastering it and the problems it solves are understood, as many have yet to find scenarios where Provider shows its flaws.

You can share this article to help another developer to continue improving their productivity when writing applications with Flutter.

There's a Spanish version of this article on Medium. You're welcome. 🇪🇸

Also if you liked this content, you can find even more and keep in contact with me on my socials: