So, What is Ansible?

Ansible is simply an Automation Tool, which handles automation of your IT infrastructure, like:

Ansible is an agentless automation tool that you install on a control node. From the control node, Ansible manages machines and other devices remotely (by default, over the SSH protocol). 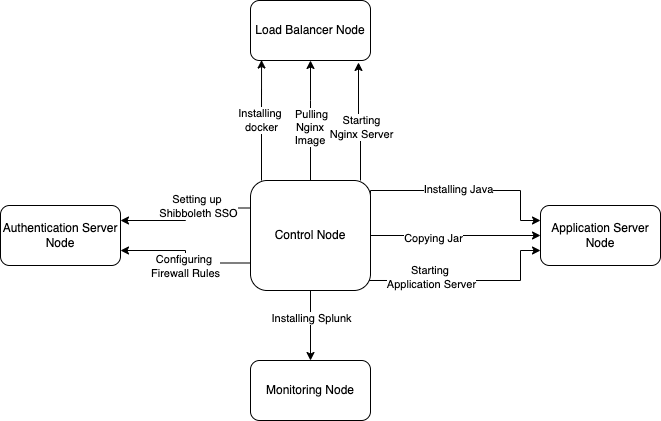 Ansible is supported on the majority of general-purpose Operating systems. A few of them are Linux (RHEL, CentOS, Fedora, Ubuntu, Debian, Arch), macOS, Windows...

There are several ways to install Ansible on your control node. If your OS supports a rich package manager that comes with Ansible binaries, go for it. If not, Ansible and its required binaries can be easily installed using python's widely used package management tool, pip.

Ansible works by connecting your control node to managed nodes and pushing out small programs, called "Ansible Modules" to them. Ansible then executes these modules (over SSH by default) and removes them when finished. The configuration of all the managed nodes can be done in the inventory file. Ansible even supports Jinja2 templating to enable dynamic expressions and access to variables and facts.

So How do we tell Ansible to execute these modules?

Let's see an example in action:

Presumably, you have already installed Ansible on your control node, we will go through the process of running the Ansible playbooks step by step.

The Ansible 'ping' module is a simple but useful tool for testing connectivity with a remote host. The module will attempt to connect to the remote, validate a usable 'python', and return 'pong' if successful.

2. Create a managed node and set up the SSH keys

Multipass is a lightweight VM manager, and we can launch Ubuntu instances using the multipass cli.
Installation Instructions: https://multipass.run

3.A Create an AnsibleWorkspace directory

'ansible.cfg' is a main configuration file that governs the behavior of all interactions performed by the control node.

Ansible works against managed hosts that are configured in your inventory file as a list or group of lists. The default location for inventory is /etc/ansible/hosts, but we can override this by updating path value of inventory field in ansible.cfg file. Let's first create an inventory file for our multipass ubuntu instance.

Open the ansible.cfg file and set the following values under defaults section

Since we have already configured inventory and private key path, we are good to verify connectivity with our multipass instance 'nginxserver'.

Playbooks are the language by which Ansible orchestrates, configures, administers, or deploys systems.
Let's write a playbook to setup an Nginx server.
Create nginx-setup.yml file in your AnsibleWorkspace directory with tasks to install and start an Nginx server.

Let's take a look at each and every part of your playbook file:

hosts: The name of the node or node-group configured in your inventory.
become: The become flag instructs ansible to connect as a root user.
tasks: tasks is a list of modules that we wish to run on the managed node in a specific order. Every task will include a 'name' field as well as a'module' with configurable arguments.
apt The apt module will install the newest version of Nginx using the standard Ubuntu apt package manager.
service service module controls services on managed node.

Ansible is packaged with a set of binaries, We can run an ansible playbook using the ansible-playbook command.

Playbook executed without any error, and we can see it has installed and started nginx service. Now, let's verify the output, go to http://192.168.215.15 (multipass instance ip, default port 80) in your browser. 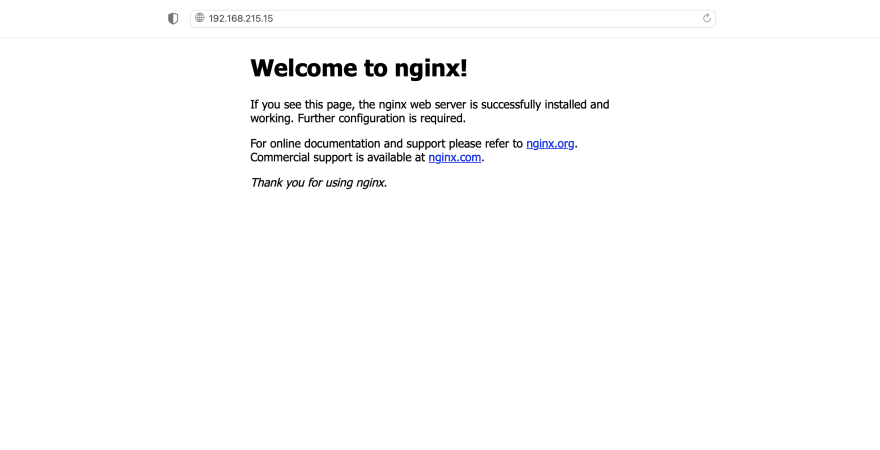 Ansible is a straightforward yet powerful automation solution for automating your IT infrastructure. It can manage modest to large-scale systems. We can use ad-hoc commands to meet simple demands or construct complicated playbooks to set up a multi-node orchestration.
Resources to learn more about ansible

Build and Deploy a Nuxt3 app to Netlify

Once suspended, manojshr will not be able to comment or publish posts until their suspension is removed.

Once unsuspended, manojshr will be able to comment and publish posts again.

Once unpublished, all posts by manojshr will become hidden and only accessible to themselves.

If manojshr is not suspended, they can still re-publish their posts from their dashboard.

Once unpublished, this post will become invisible to the public and only accessible to Manoj Sharma.

Thanks for keeping DEV Community 👩‍💻👨‍💻 safe. Here is what you can do to flag manojshr:

Unflagging manojshr will restore default visibility to their posts.