Things rarely go as planned, especially in the world of programming. Errors are unavoidable when writing code, which can be frustrating at times.

In this article, I'll show you how to handle exceptions in Python.

What is an Exception? 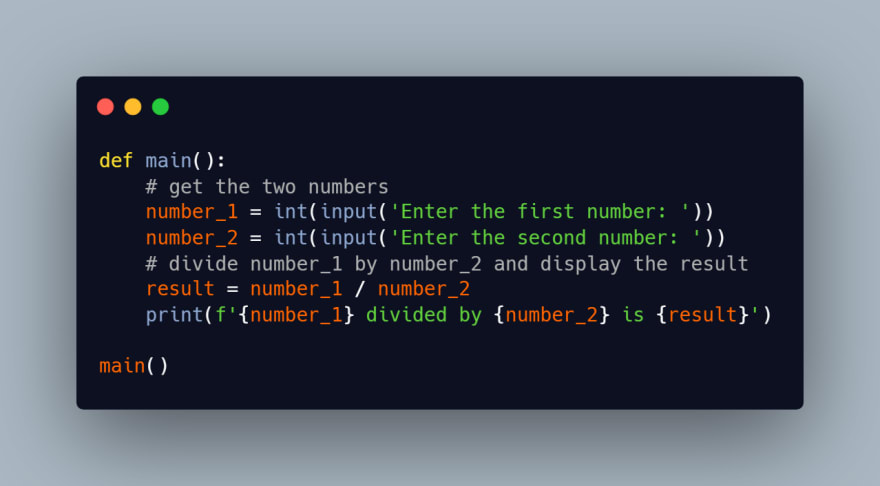 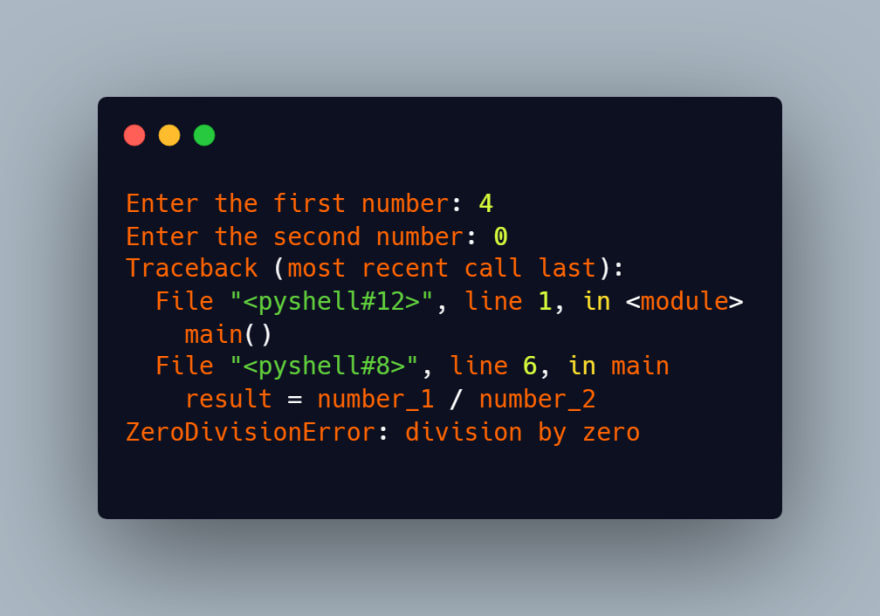 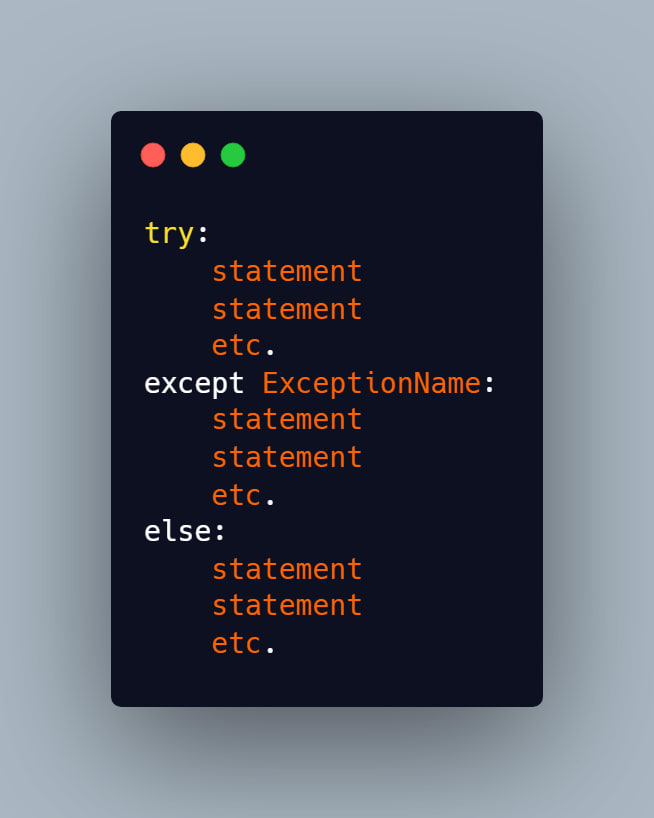 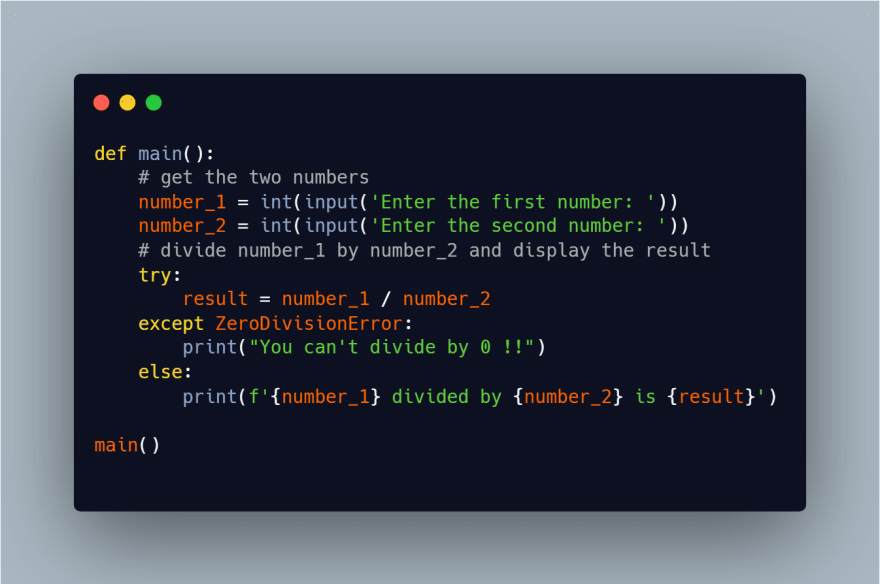 The except block also tells Python how to handle a ZeroDivisionError. A message is displayed if the try block fails due to a division by zero error. 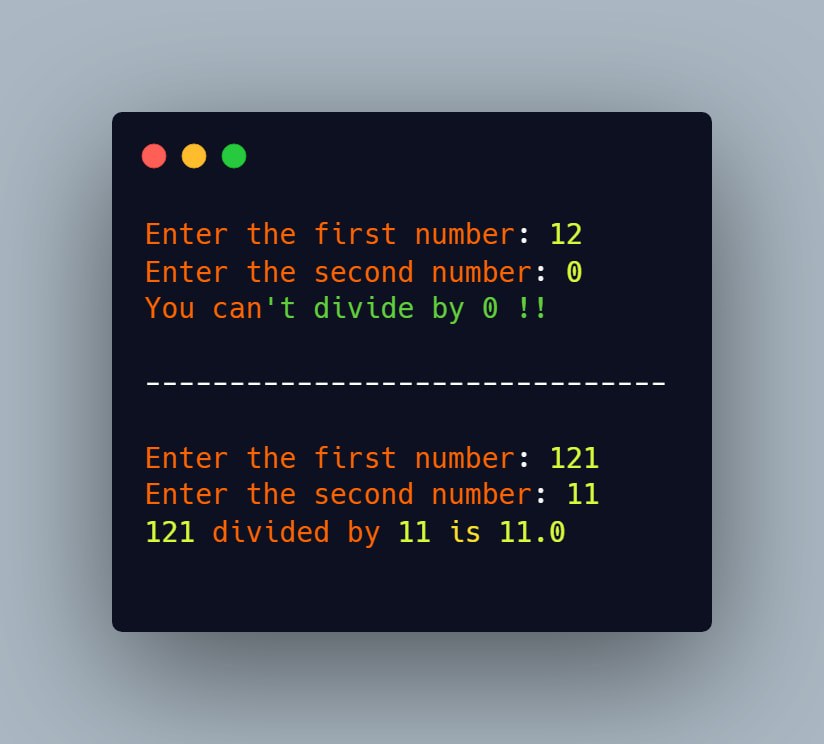 Handling multiple exceptions in your program

The code in a try block can often throw multiple types of exceptions. You must write an except block for each type of exception you want to handle in such instances. Here's a link to a resource that explains in detail the different types of exceptions that could occur in your program.

A ZeroDivisionError may occur if we attempt to divide a number by zero. In addition, if incorrect input is entered, such as twelve, which has a string data type, a ValueError may occur, and an exception is raised when Python tries to convert a string to an integer as shown in Fig 1.3. 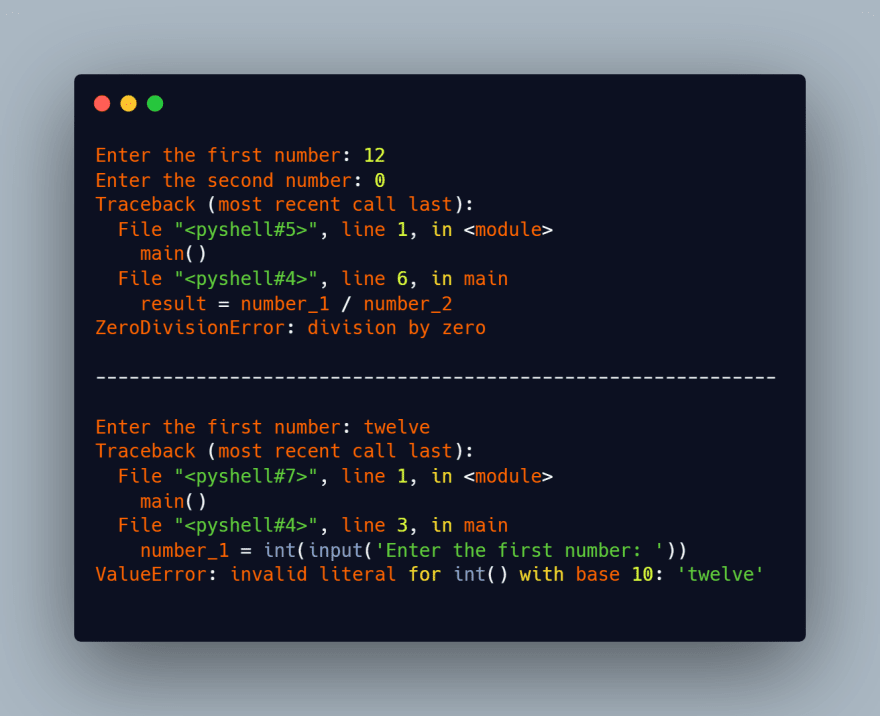 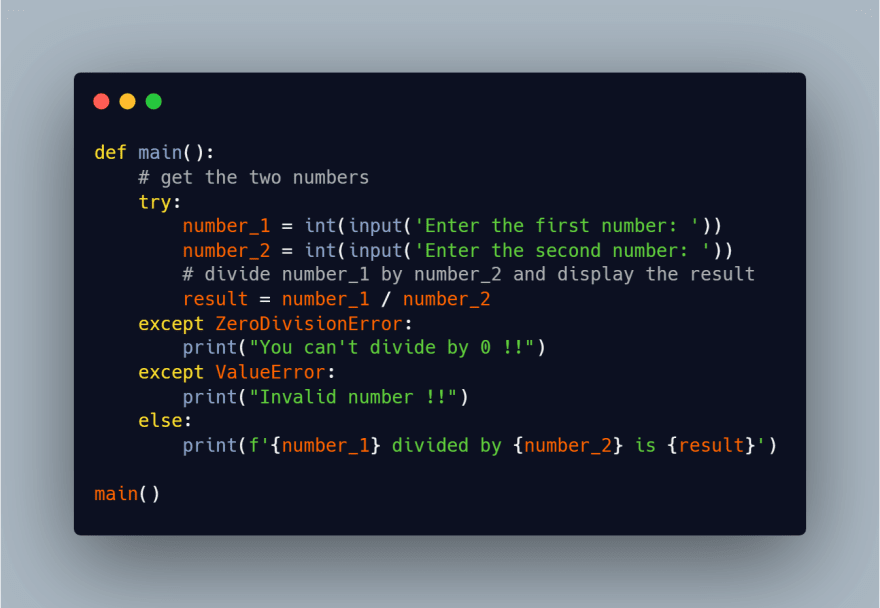 Using one except block to handle all exceptions 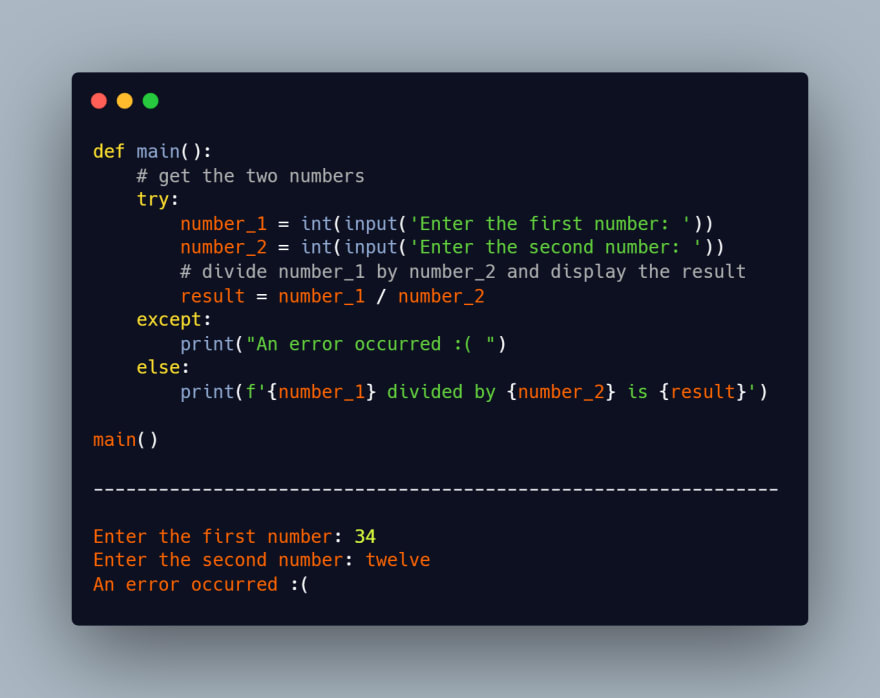 except ValueError as err

This catches ValueError exceptions; the expression following the except block specifies that the exception object is assigned to the variable err. The name err isn't particularly memorable. That is simply the name we have chosen for the sake of illustration. You are free to use any name you want :). After that, you can use the print function to display the default error message by passing the err variable. Figure 1.6 shows an example of how this is accomplished. 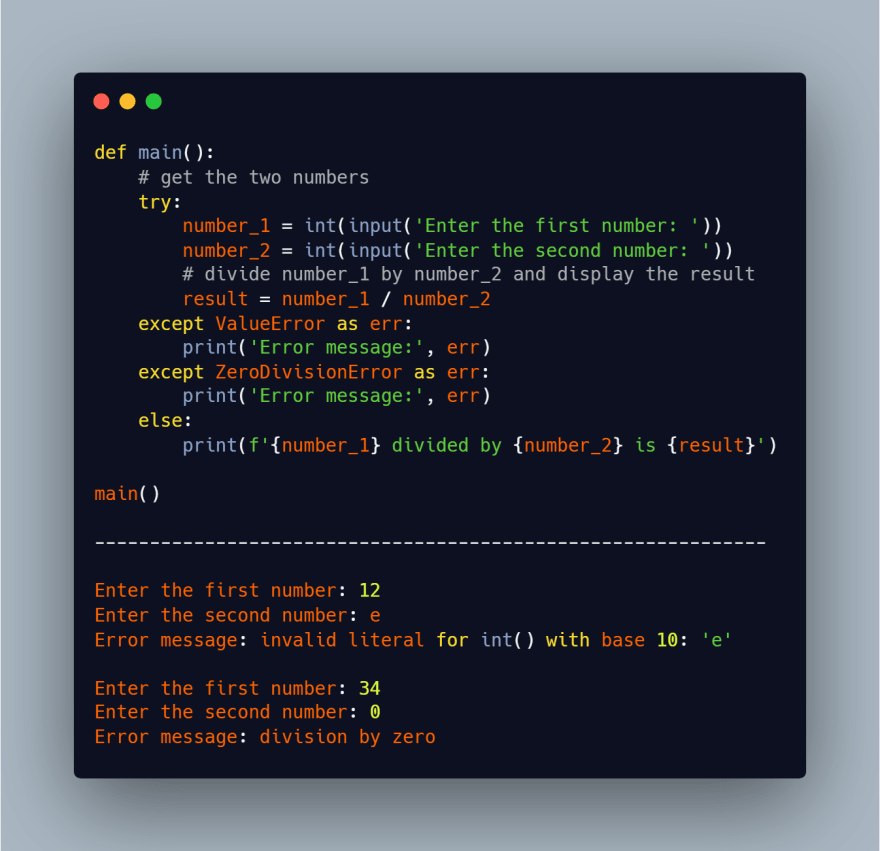 Furthermore, if you only want one except block to handle all of the exceptions raised in the try block, you can specify Exception as the type as shown below. 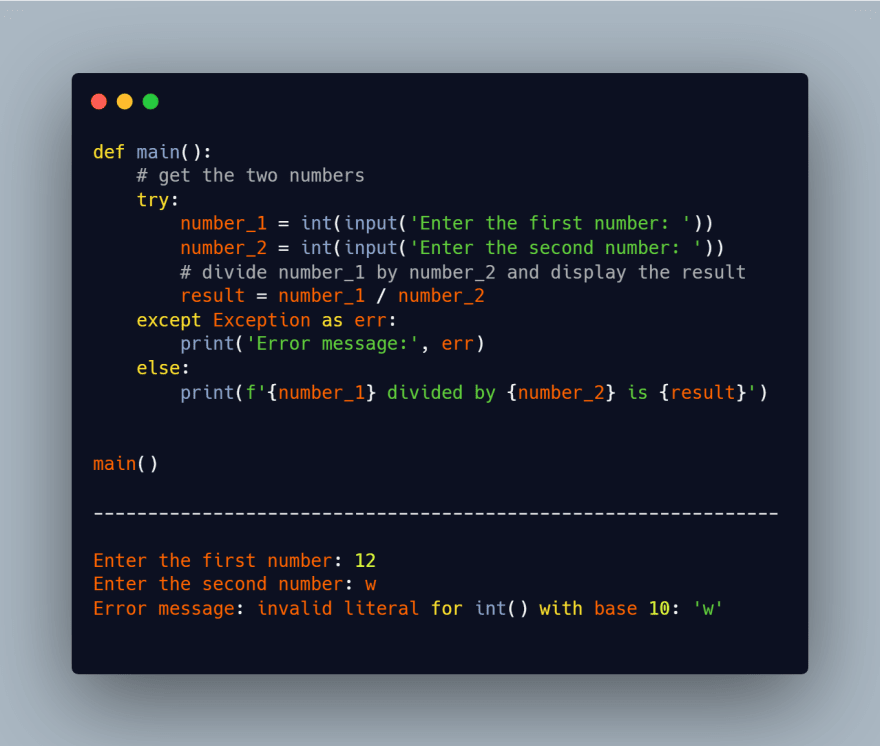 When an exception occurred in the preceding examples, an error message was displayed. However, you may not want to disclose every exception you encounter. When an exception occurs, you may wish the program to fail silently and proceed as if nothing happened. To have a program fail silently, construct a try block as usual, but in the except block, use the pass keyword to specifically tell Python to do nothing, as seen below. 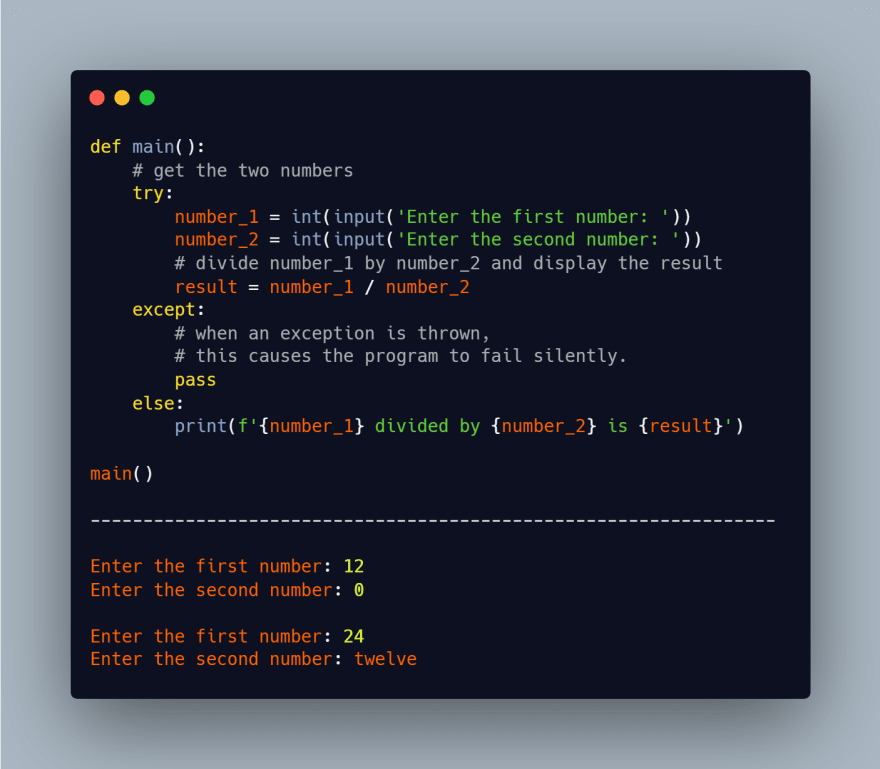 Exception handling with the Finally keyword

Finally is a keyword in Python that is always executed after a try-except block. Even if the try block throws an exception, any code written in the finally block will always be executed. Fig 1.7 shows an example of how that is done. 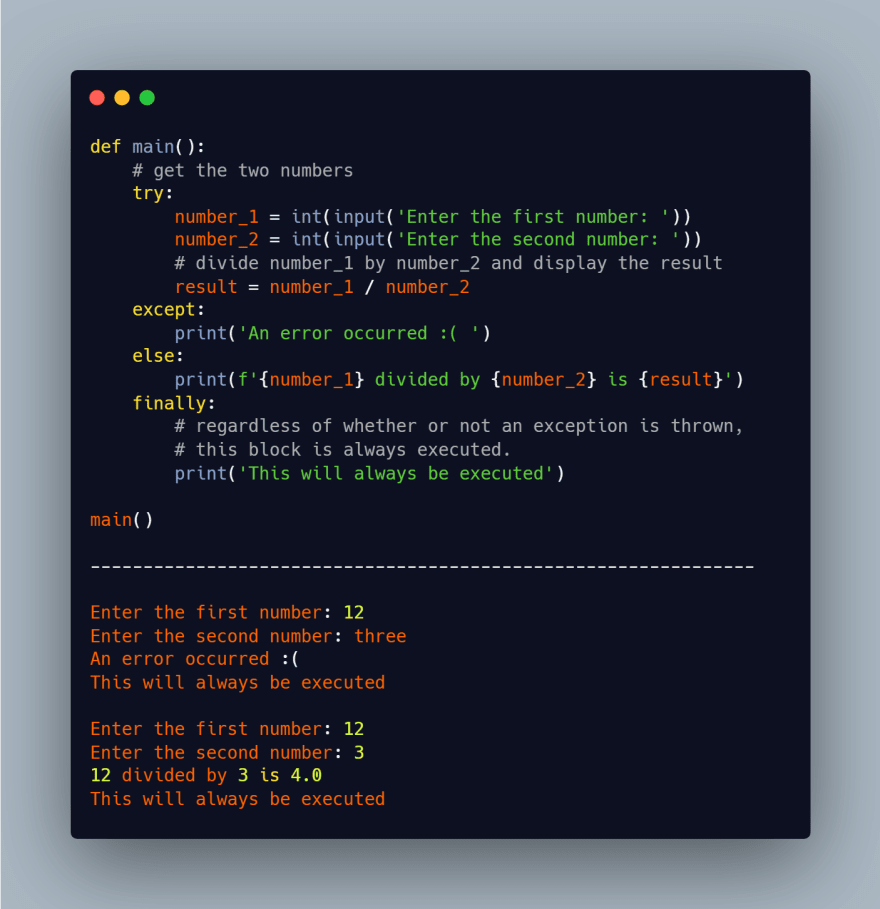 What happens if an exception isn't handled?


This is the last section of the article. Thank you for taking the time to read through; if you found the content useful, you can subscribe to my newsletter to be notified when new articles are published.

I'd like to connect with you as well, so let's connect on:

Once suspended, mannuel25 will not be able to comment or publish posts until their suspension is removed.

Once unsuspended, mannuel25 will be able to comment and publish posts again.

Once unpublished, all posts by mannuel25 will become hidden and only accessible to themselves.

If mannuel25 is not suspended, they can still re-publish their posts from their dashboard.

Once unpublished, this post will become invisible to the public and only accessible to Emmanuel Tanimowo.

Thanks for keeping DEV Community 👩‍💻👨‍💻 safe. Here is what you can do to flag mannuel25:

Unflagging mannuel25 will restore default visibility to their posts.