Proverbs are something very characteristic across regions among the world, every proverb has a huge component of popular culture. People knows proverbs of their region but, probably igonres proverbs of a nearby region despite of they are on the same language. This is my main reason why i started building this app. Retrieving and preserving the maximum number of proverbs possible of any language and region, and help a bit sharing this part of popular culture.

I started a few months ago with a toy. I built a telegram bot which shares Galician proverbs(my native language). It has 2 main functions: 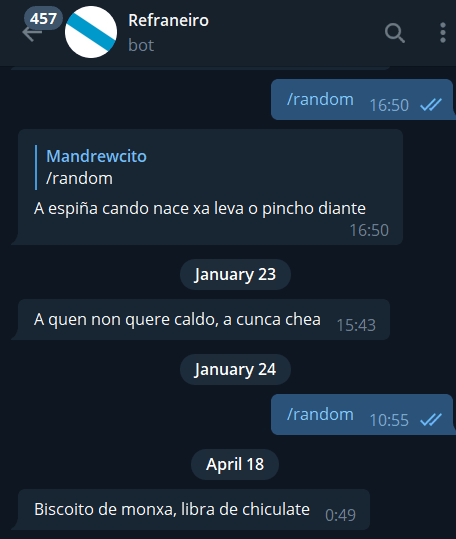 Telegram bot was built with pyTelegramBotAPI a quite simple library. I strongly redommend it if you want to quick setup a python bot.

So, my idea is storing proverbs and share it citing the original source. As a second iteration of the project i would like to make a form wich enable to anyone send proverbs to my database and mark it as a draft. But before runing we need to walk, the PVM is the website wich only shows the proverbs. Because the bot i built months ago can be integrated easily with other languages/databases, so in this point there is no much work to do.

Of course, i am a developer. All the proverbs that i will be retrieving and indexing i will be exposed it via API, so anyone can integrate other apps on it. Code will be open source, i will publish it in my Github. But firstly i would like to publish web with a few of websites retrieved and indexed.

Why i´m asking for help ?

Simple, i know proverbs websites on my native languages (Galician, spanish). But on other languages i dont.

Do you known a cool site with proverbs i can query/scrap/API in your respectives native languages? A website that you can query, in which I do not break any law: P

Thank you for reading me! :D

This post briefly outlines the top 10 neat tricks you can use to level up your logging experience.

Once suspended, mandrewcito will not be able to comment or publish posts until their suspension is removed.

Once unsuspended, mandrewcito will be able to comment and publish posts again.

Once unpublished, all posts by mandrewcito will become hidden and only accessible to themselves.

If mandrewcito is not suspended, they can still re-publish their posts from their dashboard.

Once unpublished, this post will become invisible to the public and only accessible to Andrés Baamonde Lozano.

Thanks for keeping DEV Community 👩‍💻👨‍💻 safe. Here is what you can do to flag mandrewcito:

Unflagging mandrewcito will restore default visibility to their posts.