A Git repository helps an individual and organizations to store a collection of files of various different versions of a Project. These files are usually imported from the repository into the local server of the user for update and modifications. Git is also used for coordinating work among programmers collaboratively developing source code during software development.

As an inexperienced newcomer, new to an organization, working with git command can be very overwhelming. This article is a guide to help a newbie make their first contribution in an existing organization Git repository. It can also be used by an expert as a reference guide. Let's get into it.

NOTE: For the purpose of this blog we will be working with this repository: https://github.com/MalonzaElkanah/To-Do-Flask on a Linux distro PC.

We need to turn the new folder to a local repository for the project. Using the ‘git init’ command, we will create an empty Git repository. This command will create a .git directory with sub-directories for objects , refs/heads , refs/tags , and template files.

Step 2: Connect the local repo to the remote repo 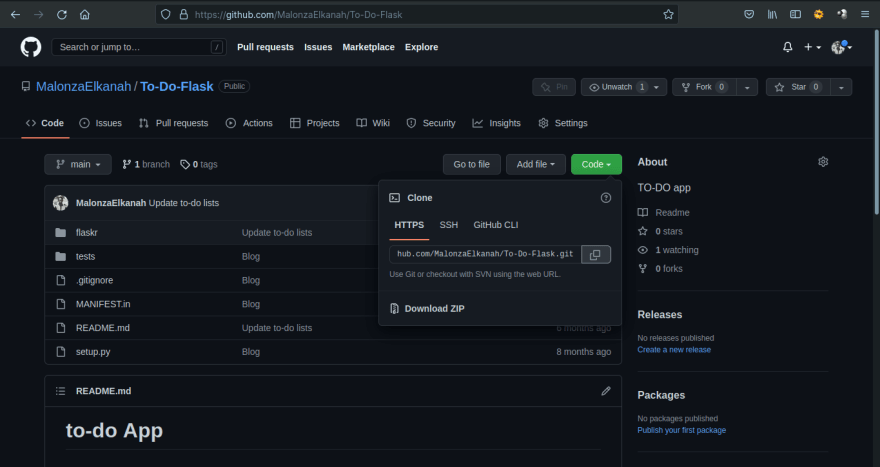 Step 3: Get the files from remote repo

The files have been downloaded to the local repository and stored in the .git folder. The files are not available in our project folder because we have not selected any remote branch. Assuming the remote repository you will be working in contains a couple of branches, you can switch between these branches using ‘git checkout’ command.
For instance, currently the to-do app has one branch, ’main’ branch, so the command to switch to that branch will be: git checkout main

If you have made modifications to the content of the project file and/or added new files to the project folder, you can update the changes to the remote repository. To view the modified files use the ‘git status’ command. For example, I have modified the README.md file and added requirements.txt file.

To push the changes:

For instance, to push our to-do app local changes:

In a Collaboration project, programmers don’t usually work on the main branch. When a programmer wants to add a new feature or fix a bug, no matter how big or how small, they spawn a new branch to encapsulate the changes. When the features are complete or bugs fixed they merge the branch to the main.

For now the new branch only exists in the local repository. To update the remote repository about the new branch, use the ‘git push –set-upstream origin <new_branch>’ command.

Every change you commit will be pushed to the new branch unless you merge the branch with another or you switch to another branch.

The objective of this article was to give step by step instruction to contribute to an existing repository for a beginner. There are other git commands not mentioned above that were irrelevant to the guide but are as much important. It's wise to know at least what they do just in case you get any conflict when working with above git commands.

Once suspended, malonzaelkanah will not be able to comment or publish posts until their suspension is removed.

Once unsuspended, malonzaelkanah will be able to comment and publish posts again.

Once unpublished, all posts by malonzaelkanah will become hidden and only accessible to themselves.

If malonzaelkanah is not suspended, they can still re-publish their posts from their dashboard.

Once unpublished, this post will become invisible to the public and only accessible to Elkanah Malonza.

Thanks for keeping DEV Community 👩‍💻👨‍💻 safe. Here is what you can do to flag malonzaelkanah:

Unflagging malonzaelkanah will restore default visibility to their posts.