When I first joined the workplace, there was no testing team in our company. And we were asked to test the interface on our own. I used to work with the Java and Python backend at that time. And there were a lot of Jquery modules on the front end side. Which is something that would get any tester to work for hours.

In past there were tools like QTP/UFT. That tool is expensive and not something a startup would afford for small team budget. I know many of you may be working with MNCs who can give you access to these tools without any budget issues. But due to working with startups we had limited budget.

So comes the selenium to the rescue.

Selenium has plenty of language bindings which helps it easy for your existing work to integrate with the test scripts. There is also Selenium IDE which works exclusively for the Firefox. 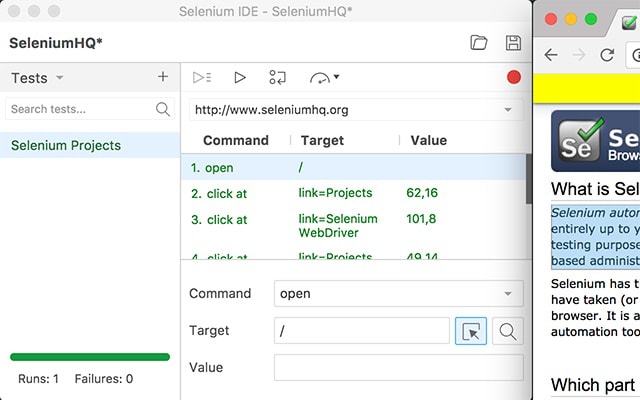 I am sure there are some similar other tools that works on chrome and other browsers and have same use case like Selenium.

The best part about Selenium is that it is free and open source. Which helps extend this framework and use it the way company wants it. So you're not limited to using it in a way that another company has done with their own language binding.

When our client project was in Java at first. We tried some of the other premium tools that helped with the webdriver. At that time most of the tutorials online were specific to the Selenium Webdriver that used Java as binding language.

Now that many of our client apps are moved away from Java. I think atleast my company is moving away from the java webdriver. I know that many big companies are heavily using .net and Java. But considering Javascript and Python gaining more footprint on the startup. I think so it's safe for me to move to Python and Javascript in near future.

I found python to be more easy to write script and test out. Our client moved to python for some backend projects. So to test out the interface and the result output.

It was necessary for us to check the python binding for the selenium. You can learn how to setup Chrome Driver with Selenium Webdriver for Python. It's extremely easy to do if you have learned how to install pip packages and setting up driver in your system PATH.

Where to after Web Automation?

I am going to learn how to automate some of my test apps so that I can use my selenium experience for app automation. Currently React and Flutter takes most of my time. So once I have something release worthy, I may get into testing the apps using one of these testing platforms.

Though I am not a tester by designation completely. But when companies want you to work on your own work with tests. In such case learning to write test and get your work tested becomes habit. In that process I get to learn about lot of small things. Now my current focus is learning automation for apps.

How was your journey in testing your own code or apps?

Does documenting APIs bring you joy?

ChatGPT: How can it help in typescript development?

Good QA wanted – why in these times is really difficult to find a skilled QA?

Mahesh K
I write (about) code and keep interest in Data science, Venture Funding and startups.
What are some tasks that programmers should do to save time?
#discuss #productivity #automation

Once suspended, maheshkay will not be able to comment or publish posts until their suspension is removed.

Once unsuspended, maheshkay will be able to comment and publish posts again.

Once unpublished, all posts by maheshkay will become hidden and only accessible to themselves.

If maheshkay is not suspended, they can still re-publish their posts from their dashboard.

Once unpublished, this post will become invisible to the public and only accessible to Mahesh K.

Thanks for keeping DEV Community 👩‍💻👨‍💻 safe. Here is what you can do to flag maheshkay:

Unflagging maheshkay will restore default visibility to their posts.