Have you ever had a moment when your code turned to be hard to read because of the style inconsistency like semicolon, string declaration with a mix of single-quote and double-quote, or bad indentation?

Creating code is easy, but creating great code is not.
We can stop poor code from being pushed in our repository through linting and formatting.

Git hooks are scripts that Git executes before or after events such as commits, pushes... It’s a really cool and quick way to validate your code. 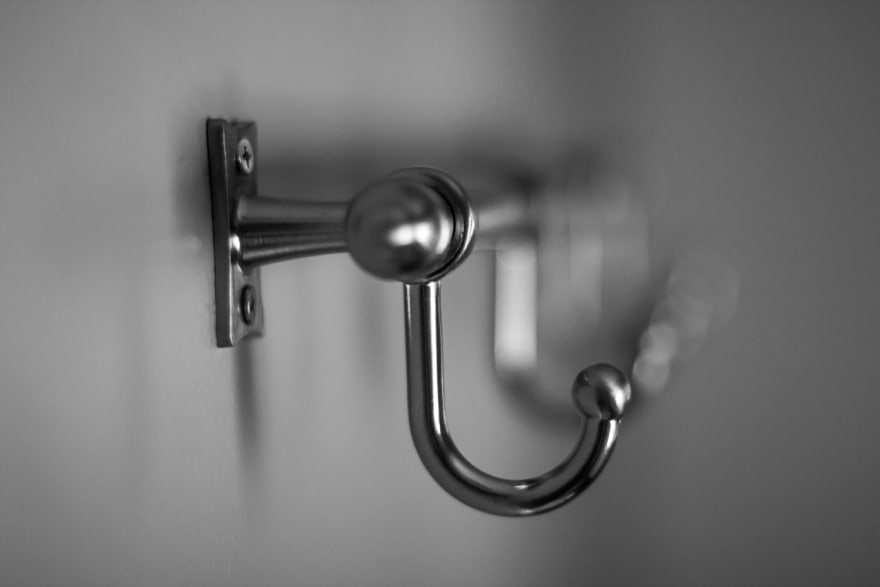 You can find the GitHub repo Here

What is a hook?

A hook is simply a script that runs automatically when a particular event occurs in a Git repository. Here we will use pre-commit.

There are many others, I let you look at the documentation of Husky

### Why use ESLint and Prettier

When building apps, it's important to have a good setup of automated and manual tools that ensures the best standards and code quality. Each project must have a linting tool to fulfill these needs

Let’s start with the React app, but you can use another technologies like Vue JS, Angular...

We will create a React application by the simplest way with a single command:

Now you should have the React application, you can run npm run start from your terminal and navigate to http://localhost:3000.

ESLint is already installed in 'create-react-app` by default, but we will create custom configuration files for both ESLint and Prettier.

Add this config in your .eslintrc.json file :

A lot more errors pop in the code.
That is ESLint enforcing our selected code style based in the config file.

Before we fix these errors, let's create the Prettier config in root project.

Add this config in your .prettierrc.json file :

Update eslintrc.json to include prettier:

So, now if there are some problems with the code, we know how to check them. However, we are sometimes too busy to fix it or we just miss it.

In order to force people to fix the code before commit it, we can use Husky. We need Husky to run a command before git commit runs. In this case, we use Husky to run ESLint and Prettier.

This command will freshly add Husky to our project in the .husky folder.

Inside this folder, we can create files that match the git hooks we want to use.

Now go to package.json and write the following script pre-commit which runs the lint-staged in our project.

Now create file named .lintstagedrc on our root directory and let us write configuration what we want the lint-staged to do before commits.

Inside .husky/pre-commit add the following script :

I have this React file with a few errors inside : 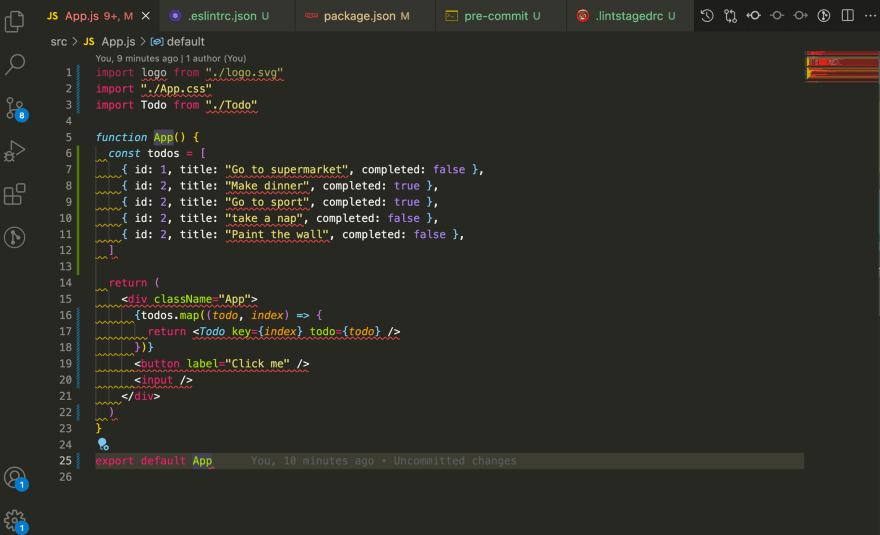 I'll try to commit it, with the errors, let's see what happens.

I can't commit it, I have to fix each error before, so let's fix that. 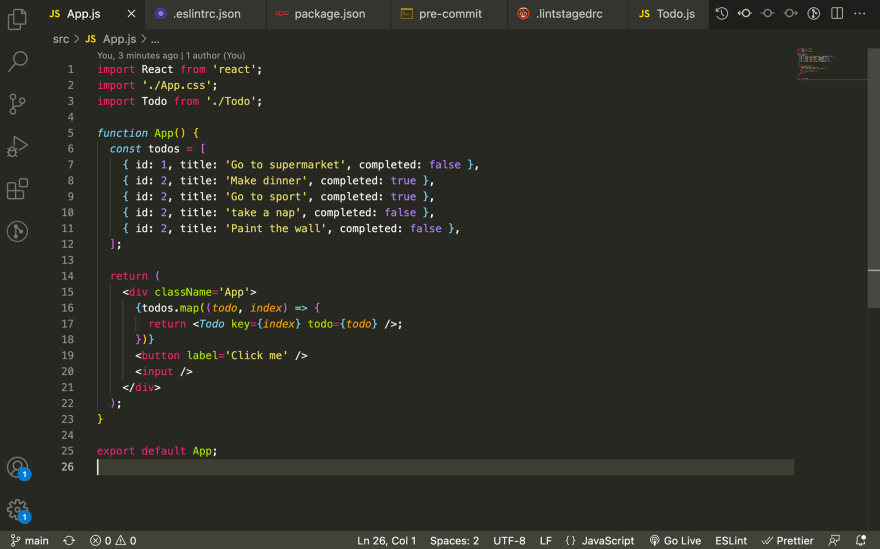 Success! 🥳 We have just committed proper code to our repository.

Your program may not bug-less, but if it is consistent and pretty, it would be easier to debug and maintain it. Those tools are only meant to reduce the chance for potential problems to arise. At the end of the day, you and/or your team are the one in charge to make sure your code is easy to read.

You can find the GitHub repo Here

20+ React Libraries to Jumpstart your next project

Once suspended, mahamatmans will not be able to comment or publish posts until their suspension is removed.

Once unsuspended, mahamatmans will be able to comment and publish posts again.

Once unpublished, all posts by mahamatmans will become hidden and only accessible to themselves.

If mahamatmans is not suspended, they can still re-publish their posts from their dashboard.

Once unpublished, this post will become invisible to the public and only accessible to Mansour Mahamat.

Thanks for keeping DEV Community 👩‍💻👨‍💻 safe. Here is what you can do to flag mahamatmans:

Unflagging mahamatmans will restore default visibility to their posts.