Kafka is the tool of choice by data engineers when building a streaming data pipeline. Adding Quine into a Kafka-centric data pipeline is the perfect way to introduce streaming analytics to the mix. Adding business logic directly into an event pipeline allows you to process high-value insights in real-time.

In this simple pipeline, Vector will produce events, dummy_log lines, once a second and stream them into a Kafka topic, demo-logs, where an ingest stream from Quine will transform the log events into a streaming graph.

Run Vector to get a feel for the events that Vector emits.

Vector generates dummy log lines from a built-in demo_logs source. The log lines are transformed in Vector using the parse_syslog and emit a JSON object.

Once Vector is emitting log entries, we need to connect that output to Kafka by adding in a Kafka sink element into the Vector.toml file.

Start the Kafka cluster and create a topic called demo-logs.

Note, I had to run the docker compose up command a couple of times before both the Zookeeper and Kafka containers launched cleanly. Make sure the containers fully load at least once before including the -d option to run them in detached mode.

Use kcat to verify the Kafka cluster is up and that the demo-logs topic was configured.

Ok, let's get Quine configured and ready to receive the log events from Kafka via an ingest stream. We can start with a simple ingest stream that takes each demo log line and creates a node.

Let's launch Vector and Quine to get the pipeline moving.

And verify that we see nodes generated in Quine.

Congratulations! 🎉 Your pipeline is operating!

The ingest query that I started with is pretty basic. Using CALL recentNodes(1), let's take a look at the newest node in the graph and see what the query produced.

The ingest query creates nodes using idFrom(), populated them with the properties that it received from Kafka, and didn't create any relationships. We can make this node more useful by giving it a label and removing parameters that are not interesting to us. Additionally, using reify.time(), I can associate the node with a timeNode to stitch together events that occur across the network in time.

Quine has a web-based graph explorer that really comes to life once you have a handle on the shape of the streaming data. But I am starting from the beginning with a bare-bones recipe. For me, when I start pulling apart a stream of data, I find that using the API to ask a few analytical questions serves me well.

I'll use the /query/cypher endpoint to get a feel for the shape of the sample data streaming from Kafka. I don't recommend doing a full node scan on a mature streaming graph, but my streaming graph is still young and small.

Using my REST API client of choice, I POST a Cypher query that returns the metrics (counts) for parameters that are interesting. 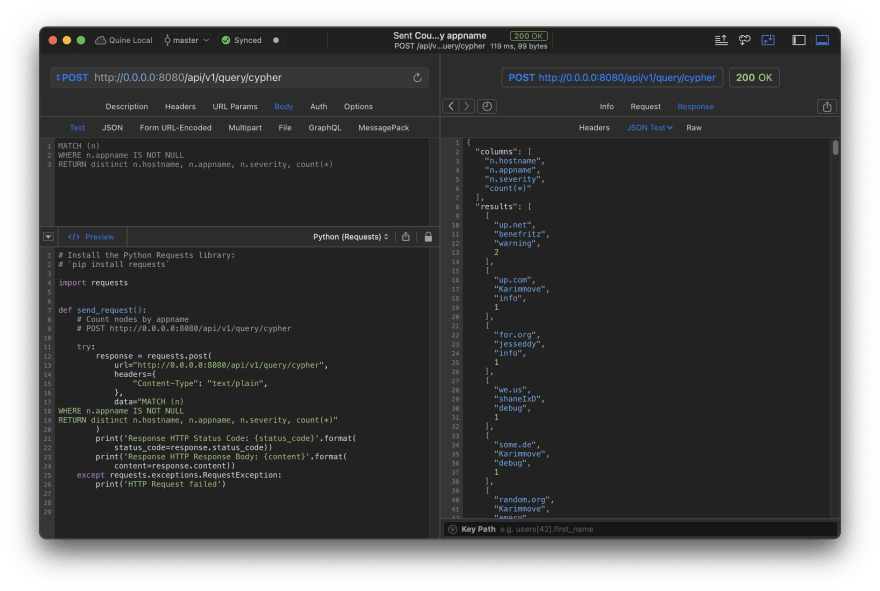 That's a lot of JSON results to review; let's take this over to a Jupyter Notebook to continue the analysis. My REST API client includes a Python snip-it tool that makes it really easy to move directly into code without having to start from scratch. 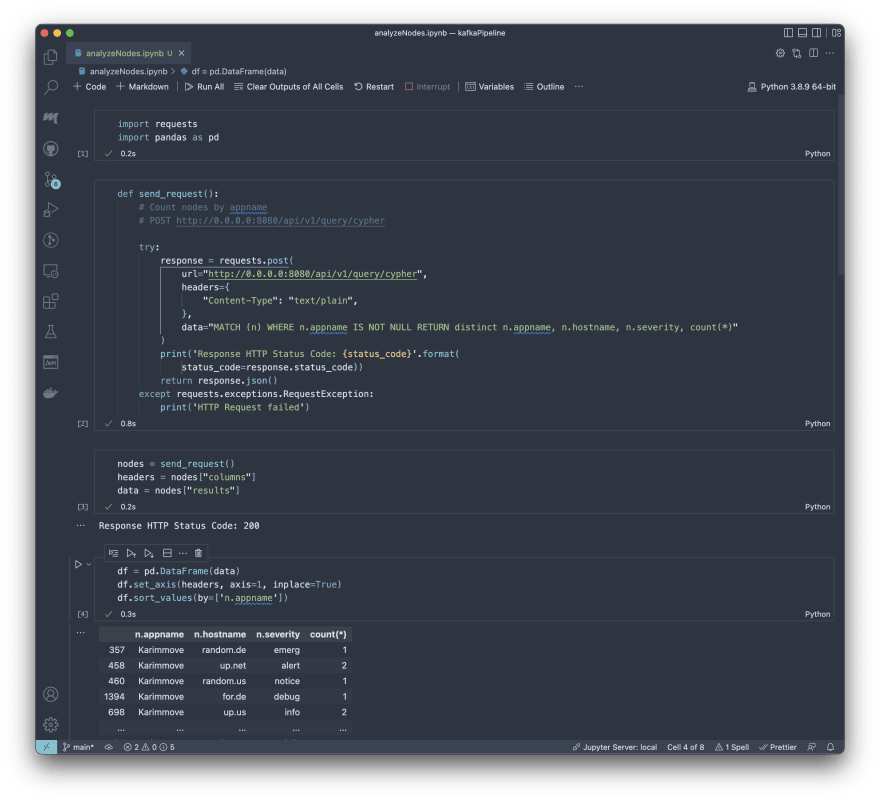 In Jupyter, within a few cells, I had the JSON response data loaded into a Pandas DataFrame and an easy to review textual visualization of what the sample data contains.

I let the pipeline run while I developed simple visualizations of the metrics. Right away, I could see that the sample data Vector produces is random and uniformly distributed across all of the parameters in the graph. And after 15000 log lines, the sample generation exhausted all permutations of the data. 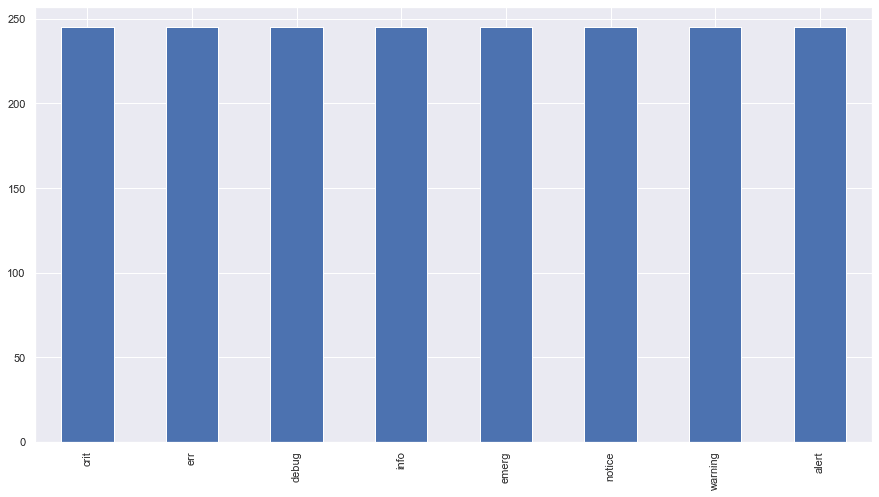 Conclusions and Next Steps

I learned a lot about streaming data while setting up this pipeline. Vector is a great tool that allows you to stream log files into Kafka for analysis. Add a Quine instance on the other side of Kafka, and you are able to perform streaming analytics inside a streaming graph using standing queries.

Quine is open source if you want to run this analysis for yourself. Download a precompiled version or build it yourself from the codebase (Quine Github). I published the recipe that I developed at https://quine.io/recipes.

Have a question, suggestion, or improvement? I welcome your feedback! Please drop into Quine Slack and let me know. I'm always happy to discuss Quine or answer questions.

Write a Tokio 0.2 decoder for a TCP stream and push its events to Apache Kafka

Once suspended, maglietti will not be able to comment or publish posts until their suspension is removed.

Once unsuspended, maglietti will be able to comment and publish posts again.

Once unpublished, all posts by maglietti will become hidden and only accessible to themselves.

If maglietti is not suspended, they can still re-publish their posts from their dashboard.

Once unpublished, this post will become invisible to the public and only accessible to Michael Aglietti.

Thanks for keeping DEV Community safe. Here is what you can do to flag maglietti:

Unflagging maglietti will restore default visibility to their posts.