You’ve probably heard of the terms “library” and “framework” being often used interchangeably. This may be because they both have a similar purpose; both libraries and frameworks provide reusable code written by someone else that solves a common problem. However, there is a distinct difference between the two.

Main Difference Between a Library and a Framework

The diagram below summarizes the difference between a library and framework using the inversion of control property: 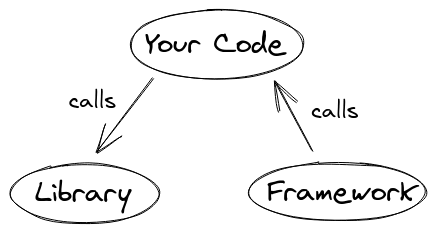 Your Code Calls a Library

You, the developer, control a library by calling specific functions from a library to insert into your code depending on your app’s needs.

A Framework Calls Your Code

On the other hand, the control is inverted; the framework is in control of your code by having defined an architectural structure that you must follow when developing your app and the framework will call your code when needed.

Let’s continue using the baking analogy used in the previous section. Rather than baking the cake yourself, you go to a bakery to buy a cake. You get to choose the size, flavor, shape, and decorations, and the bakery will bake the cake for you according to your specifications. The bakery represents a framework, and your customization represents your code.

There are other subtle differences between a library and framework, but the main difference between the two is defined by the inversion of control property, which defines who controls the development process. In summary:

Feel free to comment below with any thoughts or questions!