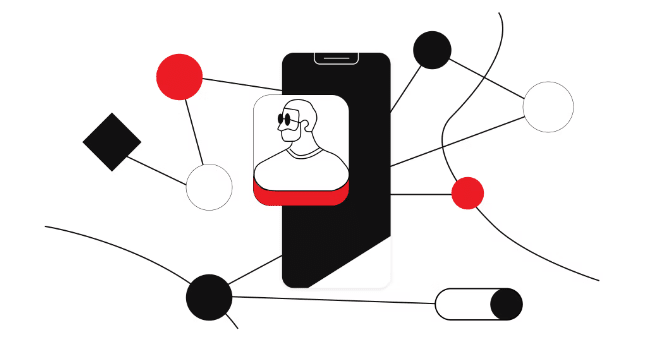 However, there's no straightforward answer to this question; it depends on your needs and goals. In this article, we will walk through the differences between both types of apps so you can decide how to proceed with your marketing and development efforts.

What Is a Centralized App?

First, we need to define terminology, centralized application is an app we use daily. Centralized apps are owned and operated by a single company and run on one server or a cluster of servers. In a few words: an app downloaded from the store is a copy of the app, and the app sends and receives information from this server. There are three types of Apps: Native, Hybrid, and Web. 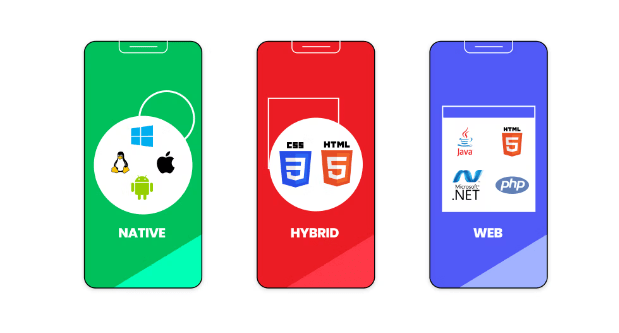 Apps that are "native" to one platform, whether it's Apple iOS, Google Android, or Microsoft's Windows Phone, are called native mobile apps. One of the main advantages of native platforms is optimization because it was specifically developed for this platform. The five best native mobile apps in 2022 are:

_No matter the size of the project, from start to finish, developing a mobile application is a laborious and time-consuming task. However, we have prepared a practical six-stepped application development. _

These apps are developed using HTML5 and run through a web browser, but they can be installed on devices like native apps. Hybrid apps are a perfect solution for companies that deliver content. Because building and maintaining apps for separate platforms is unnecessary, your business can save time and resources. Here are the favorite hybrid mobile apps in 2022:

Web Apps are built using the most popular programming languages but cannot use mobile hardware or be sold in app stores. Anyone can use a web application for a variety of purposes. Many Web apps can be accessed no matter what browser is used; however, some require a specific browser. The top web apps in 2022:

In recent years, smartphones have overtaken computers, laptops, and tablets as the most popular way for people to access digital information, leading to solutions that make building mobile apps more efficient. Thus, centralized apps have become an essential part of our daily life and global businesses that want to reach the maximum number of users. However, what are the advantages and disadvantages of centralized apps?

What Are the Advantages and Disadvantages of Centralized Apps?

Centralized apps have a few distinct advantages over dApps. Developers can retain full control over the app and how it’s used. Also, it is easier to update a centralized app because all updates are sent automatically to the user’s device. Big businesses prefer centralized apps because they can handle high traffic volumes.

All that said, there is a list of disadvantages of using centralized applications that should not be overlooked.

If there’s a system error, the app will be unable until the problem is resolved, which might inconvenience your customers. Also, a long absence of access to the application can cause an outflow of users, leading to business losses.

In addition, not to lose the data and the trust of customers, your cybersecurity and maintenance costs should occasionally increase. Users who leave their personal information in some applications automatically trust the application owner. This is due to a combination of factors, such as the need to protect and scale your central server and be prepared for users’ personal information growth over time. Owners have maintained applications at their expense and can be compensated by users' subscriptions. Also, the owner is responsible for the entire infrastructure cost and scaling, including changes in price as traffic increases.

All of the above comes down to the main point, the main disadvantage is that a single organization controls a backend. People are scared to face numerous new risks of privacy infringements, data breaches, and the illegal circulation of personal information.

What Is a Decentralized App?

The decentralized app or DApp runs on a peer-to-peer (P2P) blockchain network. Furthermore, these decentralized applications are based on smart contracts and the front end. Apps of this type use smart contracts to complete the transaction between two anonymous parties and the front end to interact with the system. To put it another way, the user pays for interaction with the smart contract, blockchain infrastructure to execute the operation and store data. The price for the use of the system itself is already on the user, rather than on the system owner. The developer can take some percentage for the maintenance of the team or its business cost. 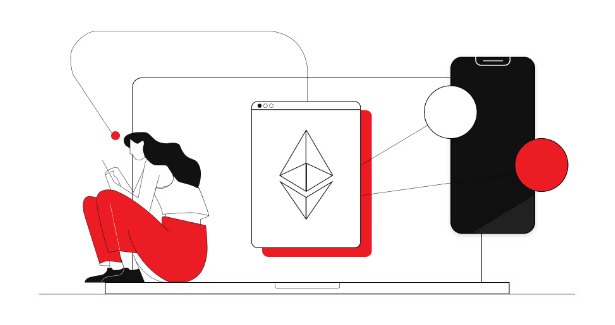 We can't introduce DApps without introducing smart contracts. So, what is the difference between smart contracts and dApp? Smart contracts in blockchain are Ethereum Virtual Machine (EVM) operation codes. In other words, these are simply translations of an agreement. An agreement contains a set of rules for the conduct of a transaction between two parties. A smart contract is a code that lives on the Ethereum blockchain and runs EVM when the user accesses the address of its location and can commit changes to the chain.

Check the article to learn more about Virtual Machine, its advantages and disadvantages, what are the Ethereum Virtual Machines and smart contracts. Explore how to build business on EVM.

Once a smart contract is deployed on the network, it cannot be changed. Due to the logic written into the contract, Dapps can be decentralized and not centralized by individuals or companies. For that, every contract needs to be carefully designed and tested.

Thus, these programs operate as intended, and no single party can influence their on-chain functioning. DApps are running on a decentralized network in combination with traditional front-end and back-end technologies. Decentralized applications combine smart contracts with a front end to create a complete computer program. However, some portions of DApps are smart contracts.

What Are the Benefits and Drawbacks of Dapps?

Just like centralized apps, decentralized apps have benefits and drawbacks. From the very beginning, DApps offer many advantages over a traditional apps are:

Besides, no matter how popular the blockchain topic is, it has limitations on use, such as:

There are a lot of concerns about this technology and, naturally, something new arouses some worries. Despite these issues, blockchain technology will likely evolve in the coming years. Technology has a way of sneaking past artificial barriers, just as nature does.

Use Cases for Decentralized Apps

It means money issued by people or groups but not a country. Now, this, of course, was the first use case for decentralized applications using blockchain technology. Blockchain solves critical elements when it comes to making money useful. Furthermore, remittances are more reliable since blockchains are more fault-tolerant than classical systems. Transfer data is visible and can always be checked or confirmed from the outside of the system. Moreover, blockchain technology makes it possible to safely transfer money to anyone on earth who access the network.

2. The tokenization of real-world assets.

The tokenization of real-world items into digital is a reality implemented with DApps and blockchain. It is valuable because authentic digital certificates should approve almost everything you own. Digital certificates can not be duplicated or forged. Blockchain shows how we begin separate ownership from physical possession for many things. Tokenization makes a significant impact on the way we use items in the future. It is a particular use case for the near future.

The central aspect of this use case is game applications and video games. The global video game industry makes 150 billion per year, most of which comes from selling virtual items, avatars, skins, etc. Selling virtual assets is a great business model for video game companies, but it is not so great for players. People spend hundreds or thousands of dollars to buy virtual items and never own them. Game companies rarely allow players to trade or resell all this digital property. Property that players paid for. Now, if these virtual items are created on a blockchain, it would make it possible for hundreds of million video game players to own and trade them directly.

As you can see, there are a lot of use cases for DApp. We believe that with the development of technology, the scope of applications will continue to grow in the future.

Moreover, already you can meet exciting and promising projects. Here are the best DApps in 2022:

OpenSea
OpenSea was launched in December 2017. Today, one of the most popular NFT marketplaces, it was initially built on Ethereum and later integrated with Polygon to reduce the transaction fees users must pay. OpenSea features many high-value collections such as the Bored Ape, CryptoPunks, Mutant Ape Yacht Club, and more.

PancakeSwap
PancakeSwap, launched in September 2020, is the most popular dApp available. Lower fees are a major reason PancakeSwap is so popular and has a large user base. CAKE is a native token of PancakeSwap, which users can buy if they want to bet on the future of the exchange. The market capitalization of CAKE is $1.5 billion, and the stock is trading at $5.43 in March 2022. With a circulating supply of 276.6 million tokens, its 24-hour trading volume is $170 million.

Rarible
Rarible uses a key technique from the DeFi boom to establish its reputation. Additionally, anyone selling or buying art on Rarible earns some 75,000 RARI tokens distributed each week to encourage activity.

Today existing, more than 350 Solana projects are on this open-source blockchain. In this article, you will read about is Solana coin worth investing in and what are the top projects in the Solana ecosystem in 2022. 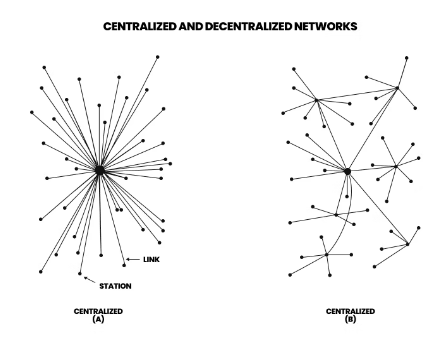 How to Build a Decentralized App?

How to Build a Centralized App?

The following steps can help you develop a centralized app for your business.

Depending on your interest, your goals, and how much control you want over your app in the long term, the size of your intended audience, and, to some extent, how you wish to market your app. According to this, you can choose decentralized or centralized apps.

Centralized applications are familiar to all of us and that we use daily. However, web technologies also revealed new forms of application architecture. DApps is a new word, an app developed with a new decentralized type of architecture. Throughout the article, we have explained the difference between app and dApp. This article has also objectively explained the advantages and disadvantages of these types of apps. Finally, we also included the development process of both. We hope this article was helpful for you and will serve as a guide for app and dApp development.

If you are still unsure, Mad Devs can help you make a good decision on this complicated question and start building your app.