The importance of testing is an integral part of any software project, as it depends on various factors such as the scope of the project, the budget, the complexity of the work, and the expertise of the team.

The execution plan for the testing process, in particular the choice between manual or automated testing, is the basis for a process that contributes to the overall success of the project.

Since automation has become a standard part of the testing process, it has helped companies take advantage of new features and improve the quality of their work. It has also increased the productivity of their QA and developers while keeping up with the changes brought about by the proliferation of devices and operating systems. However, it has also brought about a change in the way manual testing is done.

There are various types of testing and some of them perform better with automation, others get desirable results with manual testing.

In this article, we will look closer at each type of testing and eventually compare manual vs. automation testing.

What is Manual Testing?

Manual testing is a process that involves testing the software manually to ensure that the various features are working properly. This method is usually carried out by the end-user (QA Analyst), who has the perspective of the requirements and the features that are being tested.

During the manual testing process, the tester is required to report any issues that they come across to the developers, who then need to fix these problems. This step usually takes place during the development phase, as teams are under pressure to deliver new features immediately. 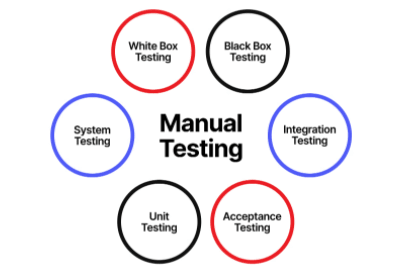 Black Box Testing - a software testing method that allows testers to evaluate the functionality of the software without looking at its internal code structure. This method can be utilized for various levels of software testing, such as Unit, Integration, and System Acceptance.

White Box Testing - a type of software testing that uses the internal structure of a code to evaluate its functionality. It is usually carried out at the unit level. This type of testing is usually done with the help of programming skills and an internal perspective.

Unit Testing - also known as component testing or module testing. This type of testing is carried out by the developers in the development environment to ensure that the various components of the software are working properly.

System Testing - is referred to as the end-to-end testing process. It involves testing the fully integrated software to ensure that it works properly according to the requirements.

Integration Testing - the testing process is carried out in three different ways. The Big Bang approach, the top-down approach, and the bottom-up approach are some of the methods that are commonly utilized.

When to choose manual testing? 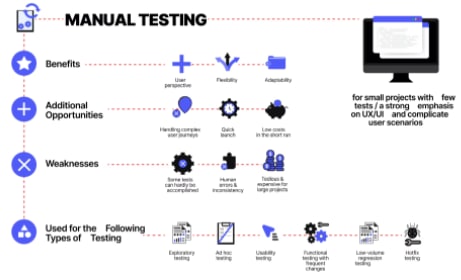 What is Automation Testing?

Through automated software testing, the testers write test scripts that are then validated by the software's developers. They use automation tools to complete the test execution in a relatively short time.

The automated testing process only uses pre-written tests that are performed automatically. This ensures that the testers can easily compare the results of the tests with the expected ones.

Unlike manual testing, automated testing does not require the testers to manually create the test scripts. It can also perform repetitive tasks and regression tests without affecting the quality of the work.

Automated testing is beneficial in modern-day delivery; it does not come at a free price. In order to get the most out of it, a team needs to make sure that they have the necessary tools and resources in place. This can be done through the creation of test scripts, data verification, and tear-down steps.

1.If there is a large number of repetitive tests to be run, then automated tests are the best option. They can be run in order to ensure that the new features don't affect the existing ones. Also, automating a test can reduce the amount of supervision needed each time.

Automated testings are beneficial for the continuous feedback that agile development teams provide is very important for them as it allows them to continuously monitor the quality of their daily work. It can be executed along with nightly builds and on-demand versions. Continuous testing is also executed within the framework of the company's continuous development pipeline. 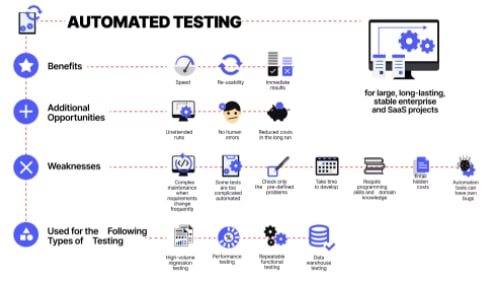 What is the difference between manual and automation testing?

The biggest difference between automated and manual testing is who writes the test case. In manual testing the human does it, and in automation testing special tools does. From this fact come further differences. Consider them in the table below: 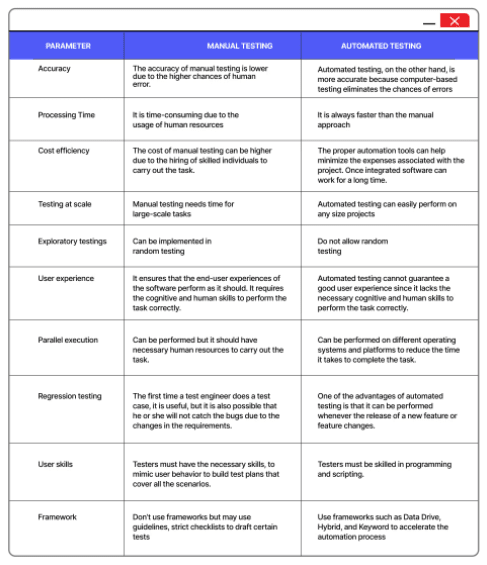 Which is better manual or automated testing?

There is no right way to answer the question of whether manual or automated testing is better. Both of these approaches have their advantages and disadvantages, and they should be used under certain conditions.

Although both approaches can provide excellent results, in most cases, only a combination of both can deliver the best results. For instance, if you are working on a complex system, using an automated test suite is not enough. However, if you are testing on a small product, using a manual testing process is still important.

Aside from these, other factors such as the timeframe, team's skillset, and budget should also be taken into account to determine if automated or manual testing is the right approach for your project.

Can automation Tester do manual testing?

If you open the current job vacancies for the QA automation tester, you will see that the responsibilities will say, for example - "Analyze and verify best automated and manual test approaches". Accordingly, a professional automated tester can do manual tests.

There are many people who are interested in software testing, and many of them will have to make a decision about which type of testing to use. The real value of automated or manual testing comes from the choice of the testing environment.

In manual testing, the tests are performed by humans. This method is usually done without the use of tools or scripts. It is very time-consuming and doesn't require knowledge about programming languages or other related topics.

In automated testing, the tests are performed with the help of software and scripts. The goal of this method is to complete the test in a shorter amount of time. However, even in this case, manual efforts are required to create the necessary testing scripts.

There is no right answer when it comes to choosing between automated or manual testing. The two methods are usually applicable to different projects and require different factors such as the budget, timeline, and expertise. Before choosing an automated or manual testing method, it is important to understand the difference between these two methods.