I've used a lot of IDE's and Code Editors since I started coding from college to my first job, Python's IDLE, PyCharm, Notepad++, Visual Studio and Android Studio and VS Code. But I felt more satisfied and happy when I used VS Code in my first job due to the reason its light, fast and has many useful extensions.

Click on the editor then in your keyboard perform this command CTRL+P then type settings.json. 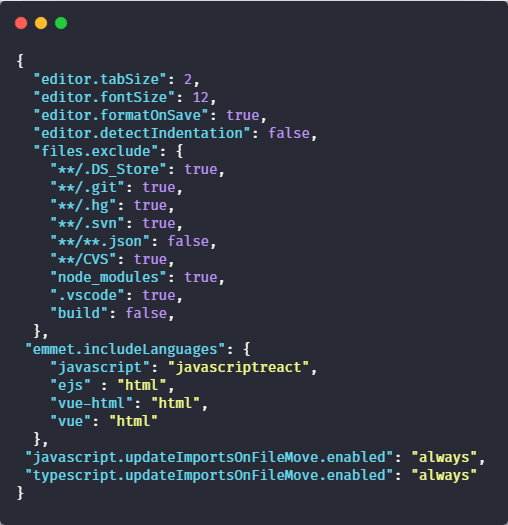 editor.tabSize - indicates the number of spaces when pressing the tab key.

editor.fontSize - obviously the size of the font 😄.

editor.formatOnSave - this formats the file contents when saving the file or the shortcut CTRL+S.

editor.detectIndentation - we must set this to false so it does not override our editor.tabSize setting.

files.exclude - files or folders to include or exclude in files explorer. You can use glob patterns. true indicates to hide the folder or file otherwise falseto indicate to not hide.

emmet.includeLanguages - enables emmet abbreviations in languages that are not supported by default.

So what are font ligatures, basically a font ligature is when two or more symbols, letters or characters are joined to form a new character.

Download Fira Code Font here.
Extract and then install the font after that. 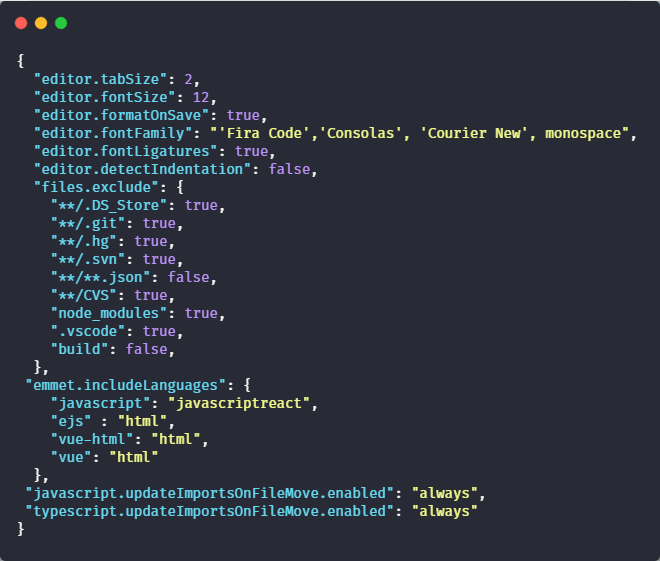 editor.fontFamily - Specify the fonts to be used in the editor.
editor.enableFontLigatures - enables font ligatures or not.

Shift+UpArrow - select all code one line up

Shift+DownArrow - select all code one line down

ALT+UpArrow - Move the selected code one line up

ALT+DownArrow - Move the selected code one line down

ALT+SHIFT+UpArrow - Copy the selected code one line up

ALT+SHIFT+DownArrow - Copy the selected code one line down

Click on the editor then in your keyboard perform this command CTRL+P then type keybindings.json. 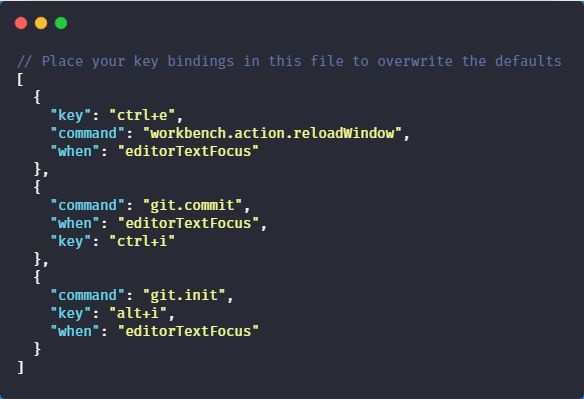 You must have git installed in your computer to add does two last commands.
You can find all the when possible values here.
There's a lot of commands in VSCode that you can edit or change.
All the commands that are available in your editor. Do this command
Ctrl+K CTRL+S. But watch out, if you add or edit a new command with a new keybinding that keybinding must not exist in the current commands.

Extensions that I use

Automatically finds, parses and provides code actions and code completion for all available imports. Works with Typescript and TSX. This extension finds the file path for you isn't that amazing.

Auto rename paired HTML/XML tag. This works in JSX too.

A customizable extension for colorizing matching brackets. If you have a problem in finding the end pair of a bracket or a curly brace then this extension is perfect for you.

Code Time is an open-source plugin that provides programming metrics right in Visual Studio Code. Find out the amount of time you spent coding in a day and a week and what languages that you spent your time most.

CSS class name completion for the HTML class attribute based on the definitions found in your workspace. If you sometimes forgot your CSS classes then this extension is perfect for you.

The most epic theme now for Visual Studio Code

Simple extensions for React, Redux and Graphql in JS/TS with ES7 syntax

Vue tooling for VS Code

Take a picture of your code.

Take a video of yourself coding while coding.

Official Dracula Theme. A dark theme for many editors, shells, and more. If you like python. You'll love this.

If you want to easily read a log file then you need this.

Adds syntax highlighting, commands, hover tips, and linting for Dockerfile and docker-compose files. I haven't used docker but I heard that it's a great technology and I hope in the future that I will use it.

Do you want to debug your React code in VSCode then get this extension. Debug your JavaScript code in the Chrome browser or any other target that supports the Chrome Debugger protocol.

Run your code snippet in one command.

How to deploy a static website in Netlify for free